Walk of Remembrance honors those lost in September 11 attacks 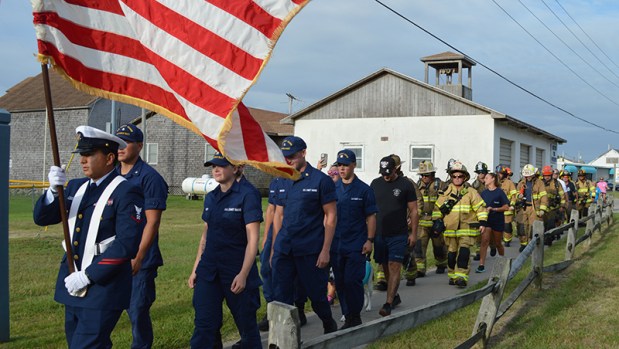 Led by a unit from the U.S. Coast Guard Station Hatteras Island, a group of firefighters from Buxton, Hatteras village, Duck and Avon and members of the Hatteras Island Rescue Squad start a remembrance walk on Sunday, Sept. 11, 2022 from the old Buxton Fire Department station. Mary Helen Goodloe-Murphy photo 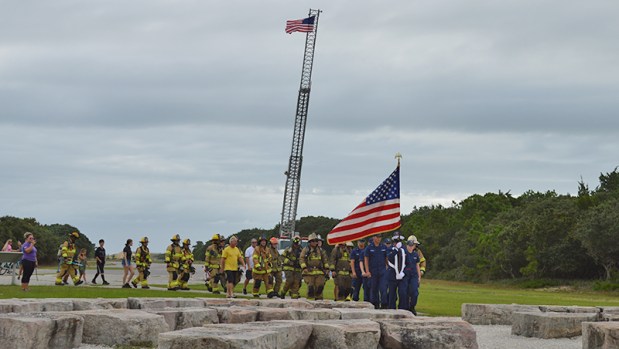 Remembrance walkers enter the “Keepers of the Light Amphitheater” on the grounds of the Cape Hatteras Lighthouse. Family members of firefighters pointed at stones with family member names. Mary Helen Goodloe-Murphy photo

Some Buxton volunteer firefighters had strapped on air bottles.

They walked from the old Buxton Fire Station to the “Keepers of the Light Amphitheater,” where seats on stones afforded a look at the Cape Hatteras Lighthouse.

In years prior, those who gathered to remember climbed that lighthouse in full turnout gear. This year, the lighthouse is closed for restoration.

At the end of the group were family members and children of the firefighters.

A Buxton fire truck crept along behind the walkers. A Dare County Sheriff’s Office deputy followed in an official pick-up truck. A few cars going to the lighthouse or to check the surf were detained briefly but were safely waved by the group.

The walkers gathered on the last rows of stones, then were asked to move forward to make room for people who wanted to join the special event.

Jeffrey Del Monte, deputy Buxton fire chief, led the group. At 8:46 a.m., he called for a moment of silence. That was the time of the attack on the first tower.

In his brief remarks, Del Monte reminded the group that at the last remembrance event he talked about “beacon,” that firefighters are a beacon to the community.

This year, he called for “unity.” He said “we need more.”

His second theme was “service,” challenging those present to “find your service.”

He asked for others to comment. U.S. Coast Guard Chief John A. Matuska thanked the Buxton fire department for its help through a hard time. A major Buxton fire affected 10 members of the U.S. Coast Guard. Ryan Albaugh and Evan Alford both spoke. Both are now Avon Volunteer firefighters.

On September 11, 2001, the Fire Department of New York City lost 343 firefighters and one New York Fire patrolman. Those firefighters came from 75 firehouses across the city.

On that day, the attacks claimed the lives of 2,977 victims, including the firefighters and fire patrolman.