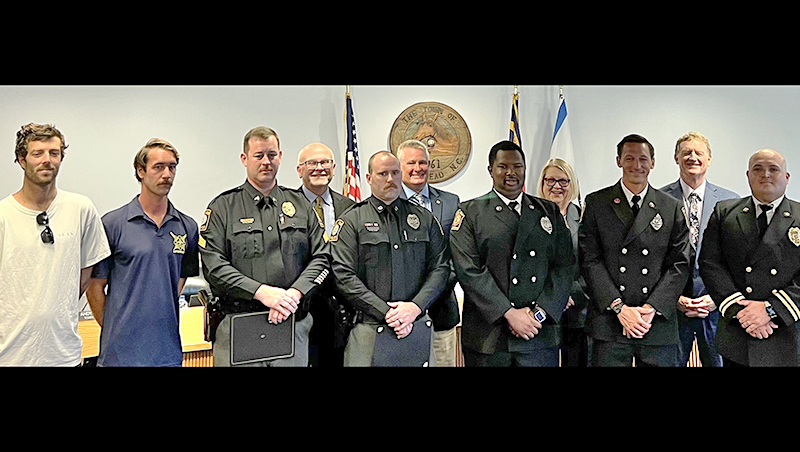 Seven first responders with the Town of Nags Head were honored for their heroic actions in saving a two-year-old girl from nearly drowning.

“Calls involving children are the single-most stressful calls that first responders can be involved in,” said fire Chief Randy Wells during a presentation at the meeting. “Their ability to remain calm and focused so they can perform the skills they have been trained to do can change the outcome for some of these children.”

Wells was speaking about an emotional, yet ultimately successful, call the responders received a little after 10 a.m. on Saturday, July 30, 2022. A two-year-old girl, visiting with her family from Pittsburgh, had been pulled from a pool at a home in the 2400 block of South Virginia Dare Trail, unconscious and not breathing.

The responders, one of whom was off duty that day, arrived quickly, performing CPR and providing emergency care to the child. Working calmly and efficiently as a team, they were able to restore the child’s breathing and pulse. One of the responders had notified Dare MedFlight early on in the call so that the child was able to be transported by Dare County EMS to The Outer Banks Hospital and then airlifted to a hospital in Virginia.

“I’m extremely proud of our staff and the way they handled this situation,” said Interim Police Chief Perry Hale. “We come to work each day not knowing which calls may come, but we do our best to make sure we’re prepared. I certainly witnessed that in this situation between the Fire department, Police department, and Ocean Rescue. Seeing our departments work together with a passion and desire to save … [the child’s] life is what Nags Head employees are about.”

“You hope you never get that call and I can only imagine what it was like as a parent to have that child and to have that risk to their life and to see this team show up,” said Mayor Ben Cahoon. “You can’t say enough about that good work. We really appreciate each and every one of you and what you do every single day.”

“Because of your selflessness, your response played the most influential role in saving her life,” said the child’s mother. “Our gratitude and thankfulness we have as her parents, being able to enjoy every new moment and new experience with her is all that we could ever wish for. We cannot thank you enough for all the work you have done to prepare yourselves for something like this.”

The child has made a full recovery and is now attending preschool, stated a press release from the Town of Nags Head.