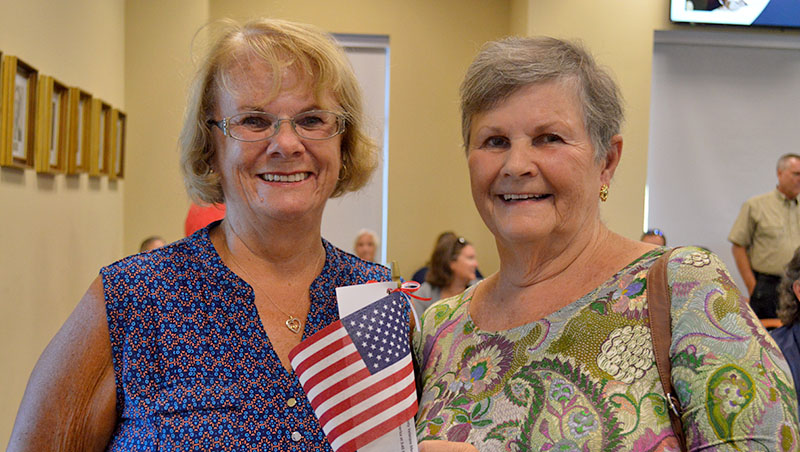 Members of the Virginia Dare Chapter of the Daughters of the American Revolution Sue Wasalaski and Colleen Fagersten presented a proclamation to the Dare County Board of Commissioners to set aside Sept. 17 through 23, 2022 as U.S. Constitution Week. M.H. Goodloe-Murphy photo

September is World Alzheimer’s Disease Awareness Month. This year’s theme is “Together we can ensure no one faces dementia alone.” The proclamation states that dementia became a trillion-dollar disease in 2018 and informal dementia caregiving is the equivalent to 40 million full-time workers.

The proclamation was brought to the commissioners by GEM Day Services.

U.S. Constitution Week started Sept. 17 and ends Sept. 23, 2022. On Sept. 17 some 235 years ago, the Constitutional Convention drafted the Constitution of the United States. The proclamation calls for studying the document and reflecting on privileges accorded.

The proclamation was presented by members of the Virginia Dare Chapter of the Daughters of the American Revolution Sue Wasalaski and Colleen Fagersten and read by Dare’s county manager Robert L. Outten.

Diaper Need Awareness Week is set for Sept. 24 through Oct. 2, 2022. In Dare County, Children and Youth Partnership and its partners have recognized that not having a sufficient supply of clean diapers “can adversely affect the health and well-being of babies, toddlers and families.”

One in three families are reported to struggle with diaper needs.

The Children and Youth Partnerships, along with donors, have created a diaper bank. The proclamation encourages donations to that diaper bank. Since the start of 2022, the diaper need program has distributed over 5,000 packs of diapers and reached an average of 100 families monthly.

Additional presentations to the commissioners included an update on Caregivers Day Out by Dare Health director Sheila Davies and Diane Denny. The program is offered from 9:30 a.m. to 1 p.m. on Mondays at the Dare Parks and Recreation facility in Kill Devil Hills.

The month of September is nationally designated as National Suicide Prevention Awareness Month. Nationally, more than 45,000 people die yearly by suicide. In Dare County, suicide is the eighth leading cause of death.

A special Town Hall will be held Sept. 27, 2022 from 5:30 to 8:30 p.m. at First Flight High School. A film titled “Shattering the Silence: A Documentary about Suicide in Dare County” will be shown.