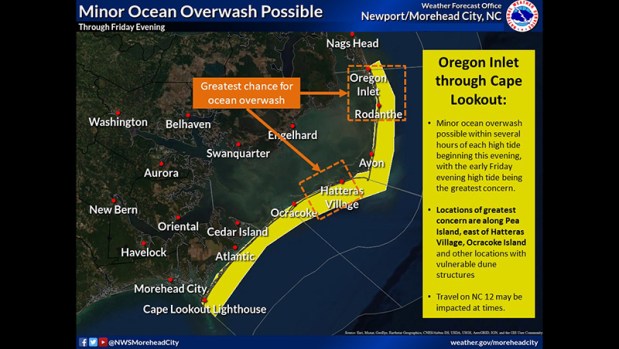 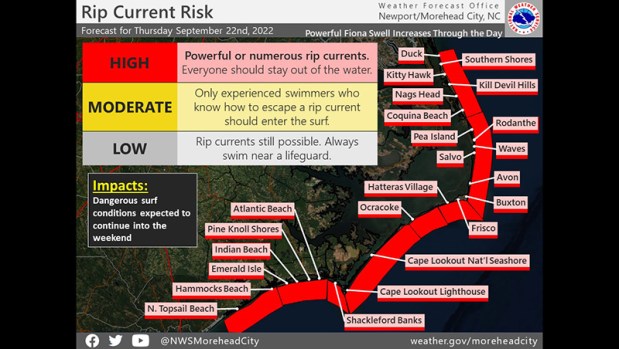 The National Weather Service has issued coastal flood and high surf advisories and a beach hazards statement ahead of predicted impacts from Hurricane Fiona.

For the coastal flood advisory, one to two feet of inundation above ground level is expected for beachfront areas with poor dune structures due to ocean overwash on Hatteras and Ocracoke islands. Areas of concern include beachfront areas near the Pea Island Visitor Center, Rodanthe, the eastern edge of Hatteras Village and eastern Ocracoke Island. This advisory is in effect from 5 p.m. Thursday, September 22 to 8 p.m. Friday.

For the high surf advisory, large breaking waves of eight to 12 feet are expected in the surf zone. This advisory starts Thursday afternoon and runs through early Saturday morning.

For the beach hazards statement, dangerous rip currents and large breaking waves are expected in the surf zone for all area beaches. Stay out of the water.

The National Weather Service predicts that Thursday will be sunny with a high near 85 degrees. A southwest wind will blow 9 to 17 miles per hour with possible gusts up to 26.

Before 10 p.m. Thursday, showers and thunderstorms may occur. Wind will shift to the north after midnight with gusts as high as 38 miles per hour.

The weather service predicts north wind will persist with declining strength through Saturday.

A gale warning is in effect for sound and ocean waters through Friday night. Wind gusts up to 46 miles per hour are possible. Seas will run 10 to 15 feet high.