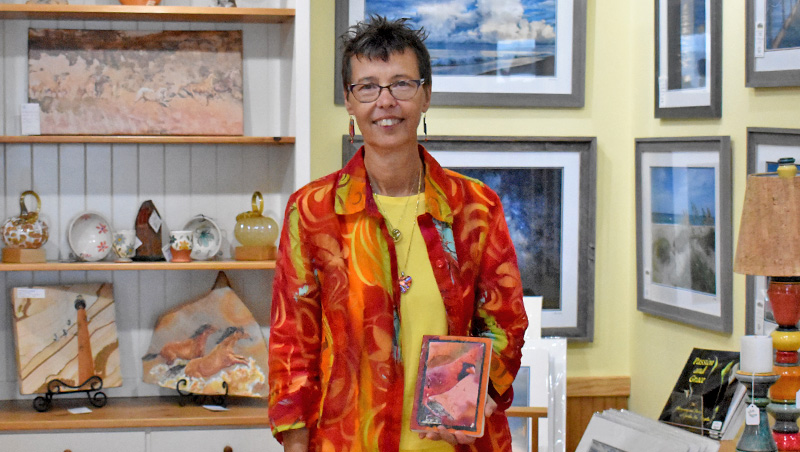 Eve Turek, owner of SeaDragon & Yellowhouse Gallery in Duck, holds her gratitude journal – the story behind the journal is featured in Chicken Soup for the Soul: Attitude of Gratitude. Danielle Puleo photo

Turek was approached by another local artist and friend a couple years ago regarding the opportunity to submit an essay for Chicken Soup for the Soul. “Eve, you’re a writer and this is right up your ally,” said Elizabeth Corsa at the time. Turek went on their website and saw one of the upcoming titles was going to revolve around gratitude. “I wrote the essay, sent it off and heard absolutely nothing for about a year,” the author shared. “So long that I forget about it entirely until an email pops up one day and lets me know I had been short listed.” Not long after, her submission was accepted for publication.

You will find the gallery owner’s essay in Chapter 1 of the edition, titled “The Gratitude List.” The story, like many found in this book, has deep roots.

Turek grew up in northern Virginia where she spent much of her time climbing trees, searching for animals and exploring the rural lands of Fairfax County. She was an only child, and from a young age her parents shared with her their belief that she was here for a reason. A miracle baby with so much to offer, she was told often.

In high school Turek had the opportunity to take a journalism course which included instruction in black and white film development. She learned how to compose, process and print, which served her well when she landed on the Outer Banks in her young twenties. A failed marriage and young child to care for led her to a job at the Outer Banks Current as a fill-in reporter. The position was to only last for six weeks, as their new reporter, Jack Sandberg, was due in after taking early retirement from college professorship.

“I was 23 years old, greener than the greenest grass you ever saw,” Turek laughed. She had a background working in the dark room and was put to work. Sandberg became her editor at the newspaper in 1980, all while he owned and ran the Yellowhouse Gallery in Nags Head.

Throughout the course of the following 25 years, Turek’s careers relied heavily on her administrative duties and less on her creativity. After leaving the newspaper, she spent 10 years with Dare County government and then worked seven years as the Colington Harbour community manager, all the while taking time to care for her elderly parents who were living in Columbia.

While working for the Colington Harbour community, the aspiring photographer met a man who was on the building committee. He was a builder who had designed and retrofitted his home to accommodate the needs of his wife, who was suffering from ALS. Turek’s mother and this man’s wife were both in wheelchairs and required similar care. The builder drew out an ideal plan for a home that would suit Turek’s mother’s needs; all that needed to be done was to sell her parents’ house.

The builder, Pete Turek, and his wife Pat became close with Eve and her family. “They were so in love with each other, Pete and Pat. It was a life love,” the writer said. She laughed as she reminisced about the times her mother and Pat would talk about having wheelchair races down the street once her mother was able to move to town. But the house didn’t sell. Years went by and at the end of 1995, Pat came down with pneumonia and passed away.

No one saw what was coming next.

In February of 1996, out of nowhere, there was a showing on the house and it sold. Eve’s parents were moving to Kill Devil Hills, but she needed to find someone who could build what they needed. Eve reached out to Pete, who was tired of tacking off the items on his honey-do list, and he agreed to build their house.

“What neither of us counted on, looked for or wanted, frankly, was the grand surprise that we would fall in love with each other,” Eve said. They married in 1997 and hired full-time care for her parents, which turned out to be an ideal situation; Pete’s cousin was looking for work. She moved in and cared for the couple as Pete and Eve started their lives together, just down the street. 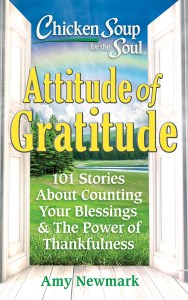 In 2000, Turek’s parents passed away. She dealt with death a majority of the time during this point in her life, as her sister-in-law’s death threw the family for a loop in 2004. She took the brunt of phone calls which doubled as venting sessions and expectant questioning hours, hoping Eve could provide a solution for the family issues. She turned to the cousin who had taken care of her parents. The advice given? Start a gratitude list.

“I literally started with little itsy-bitsy, grocery list, spiral-bound, falling apart notebook. It was hard in the beginning but I loved her advice; she said to look for the blessings every day.” Turek sat in her bathroom every night before bed and wrote 10 things she was grateful for that day. Though gradual, she began to really notice nature again. After being stuck in an office for so long, she suddenly felt the creative spark inside her come alive again.

At the same time, Eve was reading The Artisan Way, which prompted her to think about the life she craved. What was the life she dreamed to have? For Turek, it was to become a wildlife photographer.

Two years after finishing the book and working daily on her gratitude list, Eve took over the Yellowhouse Gallery with Pete “on a hug and a handshake” from Jack Sandberg and his wife Sue. Eve was able to purchase a long-lens camera and fulfill her dream of photographing the gorgeous wildlife that thrives in the Outer Banks. She and Pete “got way more years of happiness” than they could have ever envisioned – 25 years at that!

Eve shared that she has learned so much about life, and wants those who read this to know “you’re going to find your calling, in your own gifts, in your own personality. You don’t have to work out of who you are, who God made you to be, to be who you long to be … chances are the longing itself is a gift.”

As for her gratitude list, the writer still sits down every night and pens down 10 things (or more) that she is grateful for. She implements the prompt in everything she does now, recognizing that the life we want so badly for ourselves is already within reach.

“I’m no more special than every person in this world … I’m trying in all my little ways, through backstories of the photos, asking to be led as I go out to photograph, trying to intentionally practice gratitude and doubly so in the hard times. I’m trying to demonstrate through a life and a body of work that this is possible for you, too.”