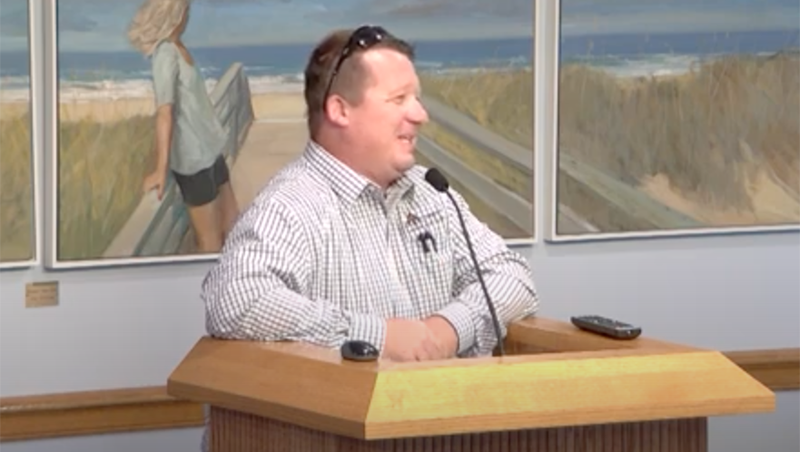 Trembly proposed, at the September 7 commissioners meeting, to repurpose street signs the town has in its possession by repainting them and stenciling 4-inch house numbers. The signs would be placed on private walkovers (with express permission from property owners) to allow for easier identification for ocean rescue and other first responders, as well as to help visitors or pedestrians on the beach identify their location more quickly in times of emergencies.

The signs can be produced for $3 each. With Trembly’s estimate of 84 signs, the entire project could be completed for about $250.

But the project doesn’t stop there. Phase One is the beach walkover project; Phase Two includes replicating a similar system of larger address signs throughout Nags Head on the west side of oceanfront homes, again with permission from homeowners, east of NC 12 and NC 1243 at the beginning of each block of address numbers, from the 2100 block to the 10,400 block.

These signs would be 18-24 inches long by 6 inches wide, with reflective numbers measuring 4 inches. Signs could be installed on houses, fences, bulkheads or on a post. The cost of the Phase Two signs are $15 each, plus $8 for a post.

Creation and installation of signs will be completed jointly by the public works department, planning department and ocean rescue. The plan is to work on the signs during the fall and winter. Signs will be available to any resident in Nags Head; details will be forthcoming from the town about the cost of signs for residents wishing to purchase them.

“I really applaud your innovation and finding a way to reuse materials that we have, and putting a team together to be able to figure out how to how to do this. I think it’s fabulous. I think especially on the beach side—the idea of knowing where you are on the beach in an emergency—I think is just a great notion,” said Mayor Ben Cahoon.

Commissioners approved both phases of the project.

Other changes coming to Nags Head include adjustments to the traffic control map. Pond Island Subdivision will no longer allow overnight parking at the bulkhead area on south North Shore Road. The forthcoming sign will read No Parking 10 pm to 6 pm. The change, according to the agenda item summary, will be helpful in maintaining the integrity of the town’s bulkhead and will help alleviate neighborhood concerns.

The second change to the traffic control map will extend the No Parking/Tow Away Zone 100’ north and south of the intersection of an unnamed road with SR1243 near Islington Street in south Nags Head. The stated purpose is for “maintaining sight distance due to business at the Outer Banks Fishing Pier/Fish Head’s Bar & Grill.”

During public comment, multiple neighbors of Nags Head Pizza Company, located at 4036 S. Virginia Dare Trail, asked commissioners to address alleged safety issues and general nuisance caused by patrons of the business. Though parking is allowed on the street, residents expressed concern over the volume of cars present and the ability of fire and EMS to reach their homes in the event of an emergency. Residents also questioned if Nags Head Pizza Company was abiding by the legal setbacks and if they were abiding by the legal number of parking spaces available, citing the town’s ordinances.

“We would like to see [Nags Head Pizza Company] succeed but … all I ask is that we all get focused on what the code says. That’s what we’ve tried to do,” said Richard Burr.

But according to a Nags Head Pizza Company co-owner, the business has followed all the regulations required by the Town of Nags Head. “Everything is to code. Everything is within our rights of what we can do … It’s really frustrating,” said Hilarey Ball to The Coastland Times in a phone interview on September 12. “We really enjoy being a part of our community—it’s one of the reasons we have a small business here. It’s been really disheartening to see members of our community actively acting against families just trying to make a living in our area.”

The Town of Nags Head staff met together after the meeting to discuss the situation, assess compliance and attempt to resolve the issues. In a statement released Saturday, September 17, the town determined that Nags Head Pizza does meet current setback requirements, exceeds minimum parking space requirements and is not bound to a vegetative buffer requirement. However, the business is willing to install a vegetative screen along the north lot line and along the wall where the picnic tables are located.

The statement responded to the complaint that the congested parking area is a fire hazard. Though the fire marshal determined that a fire lane was not required, “We have discussed with the business owners a modification to the turnaround that may work better than what was originally shown on their site plan. We are in the process of reviewing this.”

The town did agree to install additional “No Parking” signs along the east side of NC 12 to further clarify that the area is designated as a no parking zone.

At the meeting, one person who did want to stand up and make a public apology was commissioner Renee Cahoon, who made a statement during commissioner reports: “We have not done a very good job at all when we’ve done planning for housing with parking standards. We’ve been very lenient not requiring very much parking and we can see what has happened with the number of cars that people are driving. It’s obscene how many cars are coming to this area to park at houses. A four-bedroom house having nine cars [for example]—I’m observing that this week. That is awful. Other communities have done such a much better job and I’m sorry to the people in Nags Head that we did not do a good job when we were doing our parking standards.”

“I go on vacation to a six-bedroom house and you’re limited to three cars, and that’s true whether I go to Hilton Head or in the Keys. We don’t have any sort of regulations about parking and we’re paying for it with the number of cars and traffic on our highways. I just think we failed. And I’m not talking about this board because you’re late to the party, but I’ve been part of a lot of boards and we have done a miserable job and I’m sorry,” she continued.