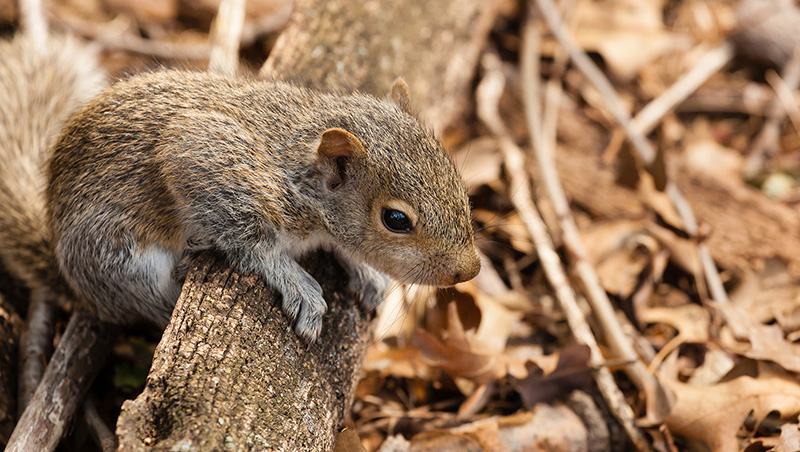 It’s hurricane season and with it comes the potential for severe weather in North Carolina. It’s also the time of year that gray squirrels, North Carolina’s state mammal, are raising their second brood of the year.

Storms that produce high winds and heavy rain, as well as tree-cutting and trimming activity, can lead to young squirrels and their nests falling out of high perches. When this happens, the North Carolina Wildlife Resources Commission receives an influx of reports from concerned citizens who have found grounded young squirrels and want to know how to help.

“A good practice is not to assume immediate intervention is the best way to help,” explains Falyn Owens, extension biologist for the Wildlife Commission. “Pausing long enough to consult a wildlife professional before moving or caring for the animal can greatly increase its chance of survival.”

A directory of licensed wildlife rehabilitators who specialize in caring for injured or orphaned wildlife can be found on the Wildlife Commission website. These professionals help people take the right action in a wildlife encounter, including when it’s best not to intervene. When it comes to a young squirrel that has fallen out of the nest, they’ll usually recommend allowing some time for the mother to retrieve it.

“Humans simply are not as good at taking care of young wildlife as their mothers and not all young animals found by themselves have been abandoned,” stated Owens.

She described that when a squirrel’s nest is disturbed and the young fall out, the female works as fast as she can to find her young and carry them back to the nest. If the nest is destroyed, she’ll build a new nest first, then bring them to the new nest. If a young squirrel is removed from the area before the female retrieves it, the chances of it surviving are significantly reduced.

A press release from the Wildlife Commission stated that although people mean well, handling wild animals, particularly very young ones, can do more harm than good – and taking one home is illegal.

“The possession of live, native wildlife is illegal in North Carolina, except particular circumstances that usually require a license or permit,” Owens said. “Despite a person’s best intentions, a wild animal is best left where it was found, or in the hands of a licensed wildlife rehabilitator.”

For example, while giving a young animal food or water is often a person’s first instinct, it can be quite harmful and even deadly for the animal if done without proper training. Licensed wildlife rehabilitators have this training and are legally able to take in and care for wildlife so they can successfully be released back into the wild.

If a wildlife rehabilitator doesn’t answer the phone right away, Owens advises to leave them a message rather than calling multiple times. They often have their hands full feeding or checking on the wildlife already in their care and may need a few minutes to get to the phone. When in doubt, even a rehabilitator in another county can provide solid advice on what to do in the short term.

People can also contact the NC Wildlife Helpline at 866-318-2401 or hwi@ncwildlife.org for advice on how to help injured or orphaned wildlife, handle wildlife conflict issues and more. Helpline hours are Monday – Friday, 8 a.m. – 5 p.m.