Theatre of Dare sets ‘The Mousetrap’ to open 32nd season 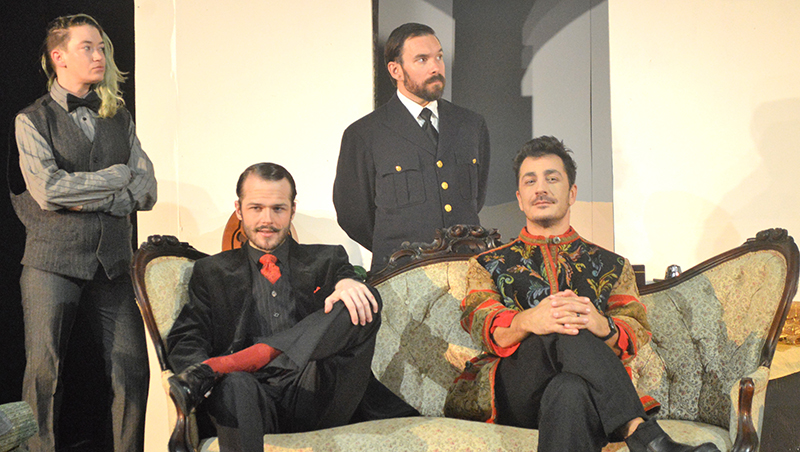 To start its 32nd season, Theatre of Dare is hoping its audiences get caught in The Mousetrap. The Agatha Christie-penned mystery is opening October 7 at T.O.D.’s theater, located at 3848 N. Croatan Highway in Kitty Hawk.

“There’s a reason why it’s the world’s longest running play,” said director Stephanie Harkness-Moxley. “It has a great cast of unique characters, suspense, drama and a little comedy all wrapped around a compelling mystery. I think audiences will enjoy getting drawn into the dangerous little world Agatha Christie created.”

The play takes place at a remote British inn where guests and staff are stranded during a fierce snowstorm. After a local woman is reported murdered, it becomes increasingly clear that the culprit is among them. A police detective (Dave Holton) arrives on skis and interrogates the suspects: the newlyweds running the house (Adara Huls, Kim Plyler), a spinster with a curious background (Debbie Taylor), a young flamboyant architect (Nick Oprea), a retired army major (Bert Plante), a strange man who claims his car has overturned in a drift (Logan Stem) and a jurist who makes life miserable for everyone (Andy Todd). After a second murder occurs, the fear and suspense escalate.

The Mousetrap holds the record for the longest-running play in the world, having been produced continuously on London’s West End from 1952 until a pandemic-forced suspension in 2020. It restarted its run last year and has now racked up more than 28,000 performances.

The production marks the beginning of Theatre of Dare’s first full season in its new home, which opened in February. Other shows on the docket include a revival of The Rocky Horror show Halloween weekend, the classic farce The Man Who Came to Dinner in December, a reader’s theater version of A Christmas Story at Dare Arts over the holidays, Southern-tinged revenge comedy Exit, Pursued by a Bear in January, modern musical satire Urinetown in March and the kids’ book mashup Wizard of Wonderland in April.

“It’s our biggest season yet,” said T.O.D. board president Stuart Parks II. “It’s an eclectic mix of the classic and the edgy, the family-friendly and the adult-themed. We hope the community will enjoy this wide range of entertainment over the next eight months.”

And it all starts by setting The Mousetrap this week.

The Mousetrap will be performed at 7:30 p.m. on October 7, 8, 14 and 15 with matinees Oct. 9 and 16 at 2 p.m. All performances will be at Theatre of Dare in Kitty Hawk, 3848 N. Croatan Highway. Tickets are available online at theatreofdareobx.com and at the door, subject to availability.