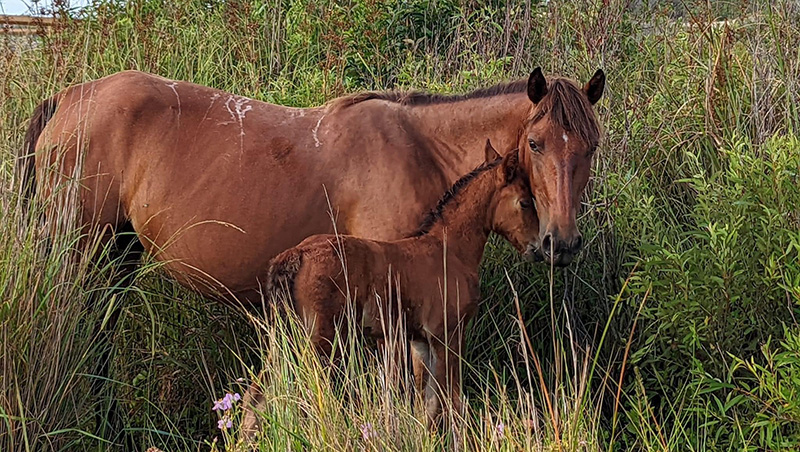 Six-week old Ceres, part of the wild horse herd in Corolla, was euthanized because of a severe case of pythiosis. She is shown here shortly after birth with her mother. Courtesy of Corolla Wild Horse Fund

Commissioner Paul Beaumont said he was “very concerned” about the Corolla wild horse herd, stating at the September 19 commissioners meeting that there are currently only six fertile mares. “I’m concerned that the horses that have called Currituck County home are at risk for sustainability,” he said. I

Herd manager Meg Puckett, however, in a phone interview with The Coastland Times on September 28, said that out of 53 mares, 19 are producing.

The last several years, Corolla Wild Horse Fund has been gathering DNA samples from each horse in an effort to build an ancestry. Puckett said the information will help the Fund discover which horses are related and where there are higher levels of inbreeding. Though it may take several more years to get results back from the entire herd, the results so far are better than expected. “For decades and decades, there was a belief that there was only one maternal line. We have more than one – it’s a very good thing. We have more than was previously thought.”

The number of horses in the herd has changed throughout the years. About five years ago, the herd cap of 50 horses was increased to 130. The optimum herd size is between 110 and 130. This number was agreed upon by the Corolla Wild Horse Fund, the US Fish and Wildlife Department, the State of North Carolina and Currituck County.

“This is believed by geneticists to be a sustainable number. We’d love to have 500 horses but our environment will not sustain that. We have to compromise – what is going to work for all of us – the horses, the environment, all of the other stakeholders. We have to reach a compromise and I think we’ve done a really good job,” Puckett said.

There are a lot of difficult decisions that must be made when managing a wild herd, including how to manage herd size and by what means, and when to remove an animal.

Recently, a six-week-old filly named Ceres contracted a severe case of pythiosis, a fungus that grows on decaying plant matter in water and causes pain and sores on the hoofs.

“When we don’t get solid freezes in the winter, bacteria, fungus, and other pathogens can grow rampantly. Unsettled weather patterns (flooding rain immediately followed by months of excessive heat) exacerbate the problem,” said a September 23 Corolla Wild Horse Fund Facebook post. Pythiosis enters the body through an open wound, even a very small one. The post went on to request that homeowners keep fences mended and keep any items off their properties in which horses could become entangled. Ceres is thought to have contracted pythiosis from contaminated standing water which seeped in from a small wound or scrape.

Because she was so young and did not yet have a well-developed immune system, the infection spread quickly. Staff members spent several days searching for the horse. Once she was located, the herd manager sedated her and took her to a veterinarian for an examination, where the decision was made to euthanize.

“The damage to Ceres’ hoof and the bones in her lower leg was irreparable. The infection had set into the bone and her hoof was sloughing off. She was in a great deal of pain and while on one hand it is always difficult to make the decision to euthanize, in a case like this we knew there was no other choice and that it was the right thing to do – beyond the shadow of a doubt,” the Facebook post continued.

Commissioner Bob White, who sits on the Corolla Wild Horse Fund board as a private individual, reported to the Currituck Board of Commissioners on the status of the Fund as well as the herd. White said that the county has a great relationship with the Fund and it is being managed well. There are currently over 100 horses; the Wild Horse Management Agreement states that the herd can have between 120 and 130 horses. Several years ago when the herd was larger, a contraceptive process ended up making several mares sterile. According to White, there are now only two genetic lines producing foals. The Fund is involved with talks to bring in a stallion to create ethnic diversity in the herd.

White also dispelled the rumor that has circulated that the Wild Horse Fund is removing horses from the herd for the purpose of breeding them. White did confirm that, many years ago, one of the former board members adopted several horses when the Fund was actively trying to thin the herd. According to White, these horses have been bred.

But currently, White said, horses are only removed from the herd for necessary herd health, and strictly according to the Wild Horse Management Agreement.