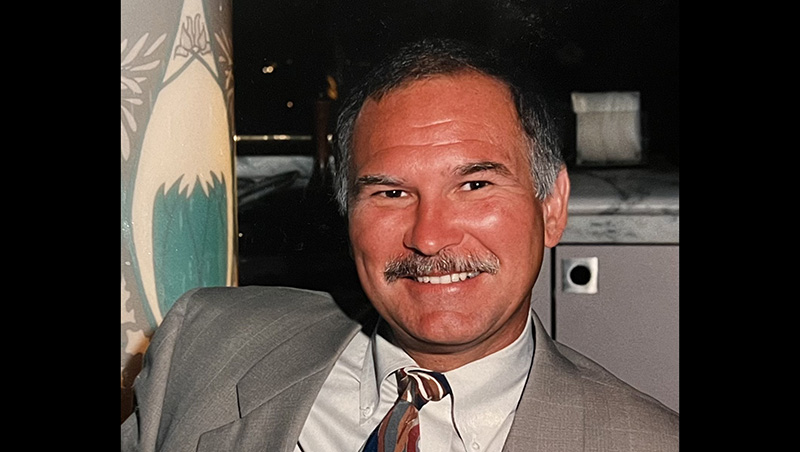 Dana Richard Lawrentz, 73, started his journey to the highway of heaven on October 10, 2022.  Dana was born on May 14, 1949 in Akron, Ohio to Richard and Lois Lawrentz. He graduated from Tallmadge High School in 1967 and attended Kent State University finishing at California State College in California, PA. where he was a member of Sigma Tau Gamma Fraternity. During his high school career, he ran cross country and was a standout third baseman for the THS baseball team who played in the Ohio State Championships. Dana served in the U.S. Army Reserves.

Dana met his wife Becky in November 1971. They had their first date, February 6, 1972 at Akron Civic Theater seeing Jesus Christ Superstar the musical. He loved the Beatles when they entered their weird stage and all David Bowie music. Becky listened to Space Oddity more times than she can count. They were married June 9, 1973 at St. John’s Lutheran Church.

Dana began his career as the Workshop Director for disabled adults at Weaver Sheltered Workshop in Tallmadge, Ohio. He then went on to administrative rolls in Sheltered Workshops in Sandusky and Logan Counties. He ended that part of his career at Rehabilitation Service of North Central Ohio located in Mansfield as Administrative Director of the Workshop for Adults.  It was then that he decided to make a drastic career change. He and Becky decided to head to the Outer Banks of North Carolina and venture into the retail beer and wine business. They started the iconic Brew Thru drive through convenience stores in 1977.

Along with a friend, Dana built the first drive through in Nags Head at milepost 10, never having built more than a bird house in shop in high school. The original store is still standing today. Dana and Becky worked side by side running the business together in the early years. They went on to open four additional locations dotted along the Outer Banks. Dana would most likely want to thank Eleanor Nick, a backdoor neighbor in Nags Head, for her building suggestions. She always had the right tools when needed during construction and provided homemade lunches on a regular basis. He would also want to thank Butch Baum, the tee shirt salesman, who after many long hours, convinced Dana and Becky to sell tee shirts out of their store. During those years Dana was a board member of the local Wachovia Bank. He had a love of cars and owned many fine automobiles throughout his life. He was always seen in his driveway washing and waxing one on the weekends; a pleasure he loved doing.

Dana and Becky retired in 2003 after selling the business to their daughter and son-in-law. In 2007 they moved to Naples, Florida where they enjoyed the beautiful warm year-round weather playing tennis, making many new friends, and traveling around the world.

Dana was blessed with a quick wit. He was never short of a joke to tell anyone who would listen and would always crack people up. The men he played tennis with loved their tennis days mostly to hear Dana’s jokes. One of the men would say he liked to go play tennis for the comedy. Dana was the life of a party and loved by everyone.

At age 59, Dana was diagnosed with Parkinson’s. He sailed through the first 8 years like a rock star playing tennis almost daily. After the smooth sailing, the Parkinson’s along with dementia began to rob him of his health. Through it all, until the very end, he maintained his mobility and quick wit. He still made us laugh with his crazy mixed up stories.

In November 2020, Becky and Dana moved to Raleigh, North Carolina to be near family.

Dana is survived by his wife Becky and his daughters whom he loved more than life itself, Brandy Foreman (Philip), Ashley Lawrentz and Alyssa Swain (Tyler). Also, by his grandchildren, Emma Claire and Sydney Allan Foreman and Dana Coulter and George Rylan Standfill and brothers, Keith and Tom (JoAnne) Lawrentz. Additionally, he is survived by many outlaws, especially Jim Ward, Mike Williams, Jack Williamson and Frank Kriz, nieces and nephews and special friends, Ron Bennett of the Outer Banks, North Carolina and Richard Newberry of Naples, Florida. Dana was preceded in death by his parents, Dick and Lois Lawrentz and his brother Gary.