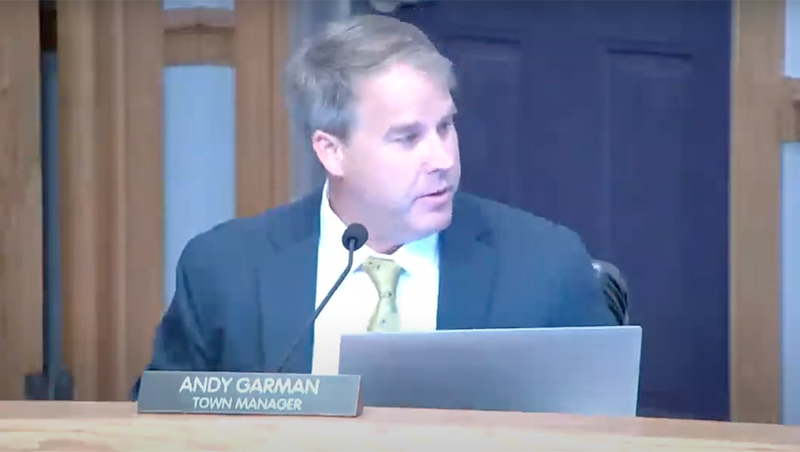 Nags Head commissioners are considering putting the brakes on development in the C-2, or General Commercial, district following community input on the location of the essential and workforce housing at the October 5 meeting.

Commissioner Kevin Brinkley made a motion to put a moratorium up to 150-days for development in C-2. There will be a public hearing on October 19 to discuss and vote on the issue.

Several weeks ago at the September 14 Dare County commissioners meeting, the board approved an agreement with Woda Cooper Companies, Inc. to develop approximately 100 housing units between the Bowsertown Road site on Roanoke Island and what’s been called the Nags Head site – only then revealed to be the 4.7 vacant parcel located across from Jockey’s Ridge State Park at 100 E. Hollowell Avenue, between Conch Street and E. Hollowell Avenue.

The Hollowell property is under contract with Woda Cooper subsidiary Sanderling Commons Limited Partnership for a purchase price of $3.7 million. Dare County has provided $9 million for the 100-unit essential and workforce housing project. Fifty-four units are expected to be built in Nags Head.

Neighbors of the property in Nags Head appealed to their commissioners to reconsider the chosen location, citing stormwater concerns, the already overwhelming traffic and the complex being inconsistent with the town’s land use plan, which prioritizes an abundance of open spaces and generally low-density development.

The units are planned for a mix of one-to-three-bedroom apartments. They will be restricted to two people per bedroom. Rent will be determined by total household AMI, or area median income. The expected construction start date is mid-2023, with expected completion in 2024.

Though the site is already zoned to allow multi-family housing, residents are calling for a rezoning to prohibit the high-density housing. During the meeting, Mayor Ben Cahoon and town manager Andy Garman took turns reading about a dozen letters from concerned citizens, all calling for a development halt in their neighborhood.

Nadeen Johnson wrote, “While we understand and appreciate the need for affordable housing at the Outer Banks, we do not believe the Hollowell site is the appropriate choice for this project … We are highly concerned that development and oversaturating the population in this area could potentially stress the integrity of the dunes further. One of the primary reasons folks gravitate into Old Nags Head is that it has maintained its historical character … The planned redevelopment of the area will further jeopardize and degrade the unique geological features of the sand dunes. In addition, we are concerned that the juxtaposition of multi-story, multi-family buildings will diminish the quality and value of the area.”

Jeff and Pat Pavlak, who live east of the proposed development site on S. Virginia Dare Trail, asked about the impact to adjacent homeowners. They questioned the kind of oversight that will exist to ensure renters are not subletting their homes during peak season, and how the property will be maintained once renters are qualified to live there.

According to Kimberly Worley, “This use just doesn’t seem to fit in with the feeling or charm of the neighborhood, which was my reasoning for purchasing in Old Nags Head. My concerns are the extra traffic it will cause, the overcrowding of the beach access paths, and the value of the homes decreasing. There must be a more suitable location for this project.”

After all letters had been read and commissioners had finished with other business items, they entered into a closed session. When they returned, Brinkley made a motion to enter into a maximum of 150-moratorium for all development in the C-2 district, which includes the parcel being discussed.

Commissioners broadened the reasons for the moratorium, claiming that other issues in the last several months have prompted a need to slow down before proceeding.

The town has been in discussion with Nags Head Pizza Co. and the owners of the neighboring residential properties to discuss parking, zoning and noise. There has been frustration on both sides between what neighbors are calling the charm and character of a mostly residential area and the legal right for a business to operate in a commercially zoned neighborhood.

Renee Cahoon spoke in approval of the moratorium: “In light of the past few months, the things we’ve heard, as well as taking a look at our land use plan, I think [the moratorium] would be appropriate. We’ve had a lot of concerns in more than one area … it started coming to light back in August and I think that this will give us a breathing room for staff to take a look at our zoning map for the land use plan.”

Questions from The Coastland Times sent to Mayor Ben Cahoon about whether or not the Nags Head is committed to providing affordable housing somewhere in town or why the town is putting the brakes on a project that is appropriately zoned for the space had not been responded to as of press time.

In a statement released by town manager Andy Garman on October 7, it appears that the town’s comprehensive plan, which states as a goal its desire to preserve Jockey’s Ridge and the Historic District, may not be in alignment with its current zoning ordinances:

“When we adopted our Comprehensive Plan in 2017, we established several character areas throughout the town with specific development goals. This included a Historic District Character Area, with a goal to preserve the integrity of the Jockey’s Ridge and Historic District.

“This was shown in the plan as the area east of US 158 from Hollowell Street to Danube Street. This area has been zoned C-2, General Commercial, for many years which allows the broadest range and highest intensity of uses in the town. For example, the shops at 10.5 and the outlet mall are zoned C-2. The Comprehensive Plan suggested that C-2 zoning is not appropriate in these locations and that further study was needed to establish appropriate standards to protect these areas.

“This is a project we hadn’t yet initiated, however the recent issues [have] brought it to the forefront and made it a priority for the board. The study may look at the type, intensity, and character of the uses allowed, and it could result in new districts and/or standards being proposed.”

This has come as a surprise for real estate company Woda Cooper, which is already in a contract to provide essential and workforce housing in Nags Head.

Senior vice president of development at Woda Cooper Denis Blackburne declined to speak on the record in a phone interview with The Coastland Times on October 7. However, the contract between Dare County and Woda Cooper Companies, Inc. (WCC) says, “It is the intention of WCC to create the Development in such a way that it is both consistent with the vernacular architecture of the communities of Nags Head and Manteo, including scale and design, and also provides the residents of the Development with access to community amenities and employment opportunities.” The full contract agreement is available at darenc.com/home/showpublisheddocument/11481/637977151305567755.

All parties will have an opportunity to discuss the project and vote on the development moratorium at the October 19 public hearing in Nags Head.