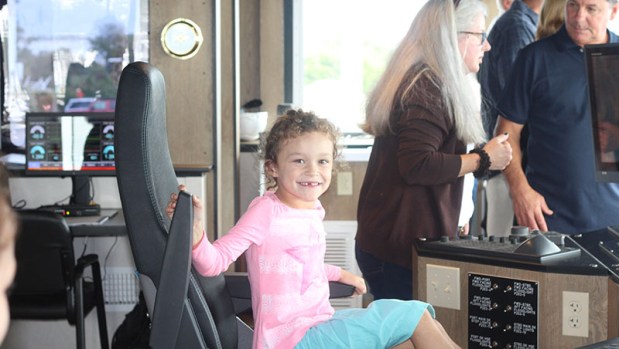 The Miss Katie was open to the community. Children were allowed to sit in the captain’s chair and even honk the very loud horn, much to their delight. Summer Stevens photo 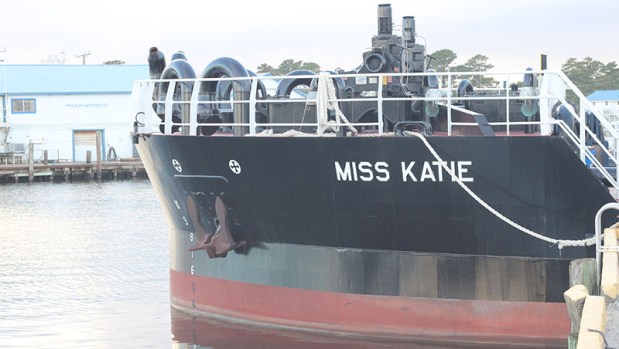 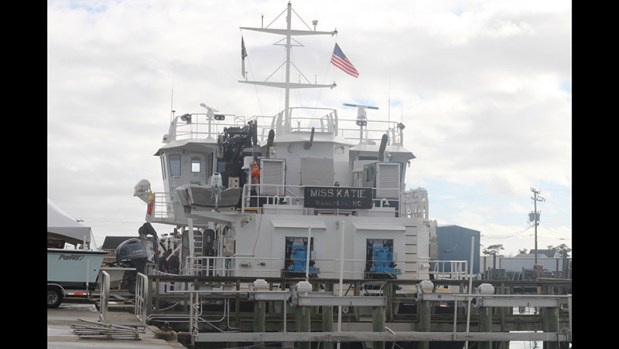 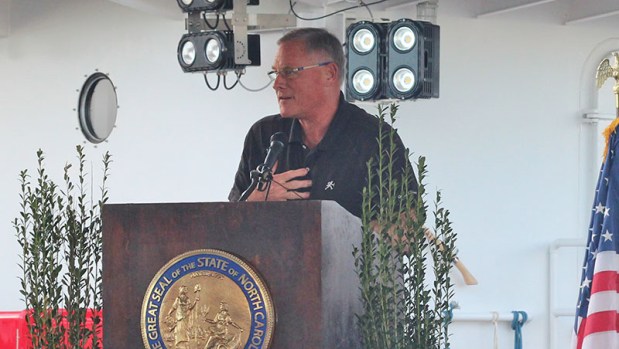 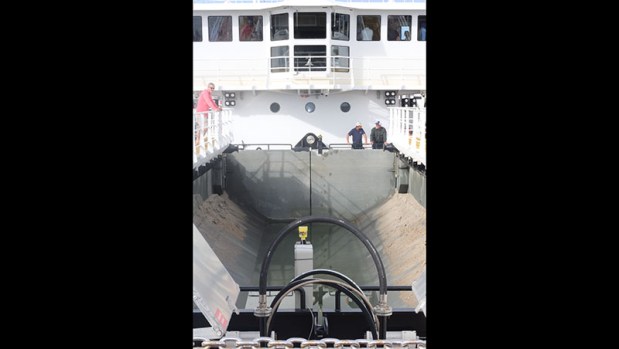 The Miss Katie can be run up to 12 hours a day. The hopper has capacity of 512 cubic feet and takes only thirty minutes to fill. Summer Stevens photo 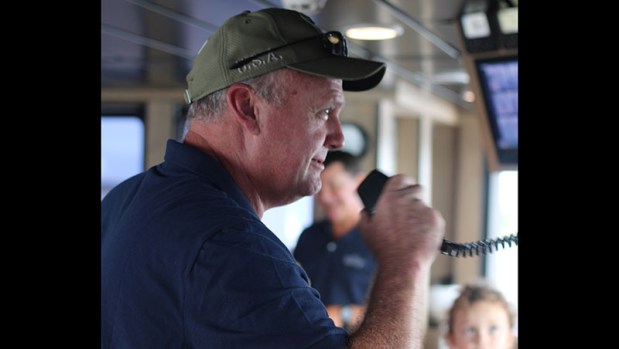 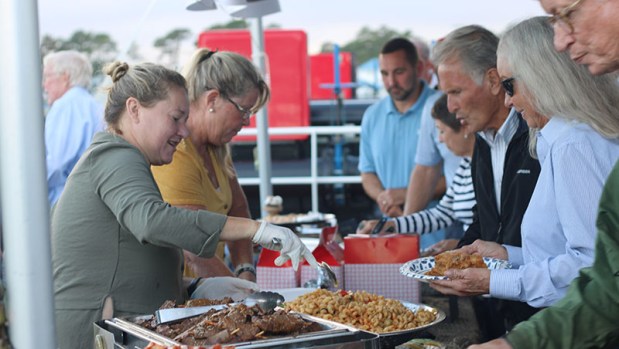 Guests celebrated the christening with a ceremony and remarks from local, state and national politicians. They enjoyed a meal and live music. Summer Stevens photo 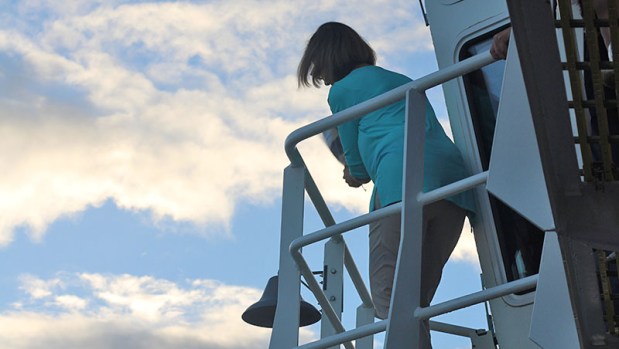 Brooke Burr, wife of U.S. Senator Richard Burr, performed the traditional christening of breaking a bottle of champagne over the boat’s hull. It was a sturdy bottle and required several tries and a little help from the vice president of EJE Dredging Service, Jordan Hennessy. Summer Stevens photo 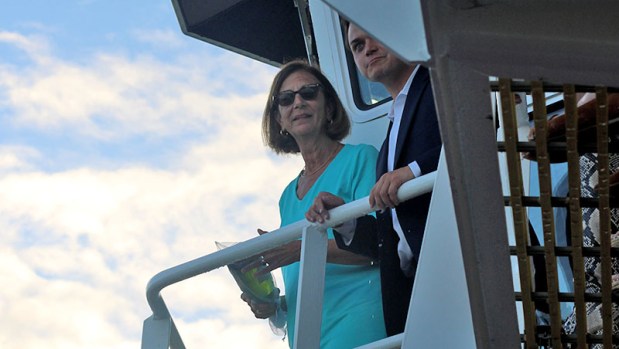 Brooke Burr, wife of U.S. Senator Richard Burr, performed the traditional christening of breaking a bottle of champagne over the boat’s hull. It was a sturdy bottle and required several tries and a little help from the vice president of EJE Dredging Service, Jordan Hennessy. Summer Stevens photo

The much-anticipated “Miss Katie” shallow-draft hopper dredge was open Thursday, October 13 from 10 a.m. to 4 p.m. for a community open house, followed by a christening ceremony.

The public was invited to explore all levels of the 156 foot vessel, including the engine room, the control center and all decks overlooking the hopper, which has a capacity of 512 cubic yards and can be filled just half an hour. Miss Katie can run up to 12 hours per day, weather permitting, which is a “game changer,” according to Dare County Board of Commissioners Chairman Robert Woodard.

Dare County’s waterways are crucial to its economy. Commercial and sport fishing, seafood packing and boat building contribute hundreds of millions of dollars to the county each year. The shoaling that happens beneath the surface of the waters makes navigating the waters a constant challenge. About 1.2 million cubic yards of sand move across the inlet every year, affecting recreational and commercial fishing businesses.

The risk of running aground or getting stuck has led to a vast number of commercial fishermen taking their catches north to Virginia or farther south out of the Outer Banks. It’s estimated that undredged or inconsistently dredged waterways could be contributing to a potential loss to the economy of about $500 million; with a fully opened inlet, the economy could see increases up to $1 billion.

Dredging the federally authorized channels is the responsibility of the U.S. Army Corps of Engineers, but a lack of time and resources has delayed many much-needed dredging projects. Shoaling happens quickly, particularly after a hurricane or tropical storm, making waterways unnavigable and sealing off some waterways to boats that need deeper water.

The dredge was built with a public-private partnership between Dare County and EJE Dredging Service out of Greenville at a cost of more than $15 million. North Carolina General Assembly financed the project with a forgivable loan grant that Dare County administers.

After the open house, visitors enjoyed live music and beverages until the christening ceremony began. Woodard gave the welcome, followed by the invocation by Senator Norman Sanderson (NC State Senate District 2), and the leading of the Pledge of Allegiance by Dare County commissioner Steve House.

“I saw the same vision that everybody else did,” Burr said. “This was an opportunity to say to recreational and commercial fisherman, ‘Wanchese is open 365 days a year, 24 hours a day.’”

After thanking the many entities that have made the project possible, including the Coast Guard and the Army Corp of Engineers, Burr thanked the community.

“It’s the community that’s part of the partnership. It took the community behind this one. This is unique and it’s so relieving to me to be able to spend state money,” he said, drawing laughs from the crowd. “But listen, this is actually money that was collected through fees that’s now going to invest in the future.”

“We’ve been doing it with Band-Aids, and now we have the opportunity to build it from the ground up,” Burr added.

Following Burr’s remarks, his wife Brooke Burr performed the traditional ritual of breaking a bottle of champagne over the hull to christen the vessel.

The evening’s festivities concluded with a catered meal and live music.