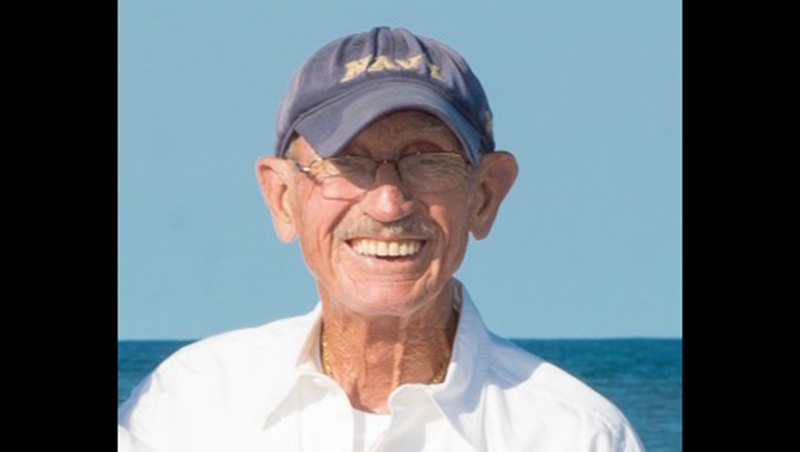 Nags Head, NC – John Palmer Newbold, 90, passed away peacefully at home on Sunday, October 16, 2022. He was the eldest of two sons of the late Ruth Fulcher and James Little Newbold of Bozman, Maryland. John was preceded in death by his brother James William Newbold of Westmoreland, Tennessee.

Born in 1931 in Highland Park, Michigan, John’s family moved to the Washington, DC-Baltimore area where he was schooled and then attended Washington College in Chestertown, Maryland. In college, John was manager of the Lacrosse Team, was a member of Lambda Chi Alpha Fraternity, and was elected Senior Class President. He graduated in 1954 with a business degree.

After college, John fulfilled his military obligation enlisting in the Navy. He attended Officer Candidate School, was commissioned as an Ensign and served aboard the Diamond Head where he served as Communications Officer, Operations Officer, and qualified as Officer of the Deck underway and Command Duty Officer.

Upon release from active duty, John joined Moore Business Forms as a salesman, later serving as a Sales Supervisor and then as a Senior Account Executive, working in the Eastern shore of Maryland area. He ended his career in Tidewater, Virginia after 35 years of service, earning membership in the Moore Achievement Club by meeting and exceeding his assigned sales quotas. John was Master Mason belonging to Concordia Lodge No. 13 AF & AM located in the Towson, Maryland area.

In the 1970s’, John had a cottage built on the Outer Banks where he spent weekends pursuing big blues and stripers in the surf. He was passionate about ORV beach access and joined the North Carolina Beach Buggy Association where he served for over thirty years as a director, later as Vice-President, then as President. He also captained the Beach Drummers Surf Fishing Team and was considered a very accomplished surf angler.

Special thanks to Dr. Charles Lisner and his staff at the Dedicated Care Center in Norfolk for all the special care they provided John over the years. Without their care and the care of his loving wife Sharon, John would have never lived as long as he did!

John is survived by his beloved wife, Sharon, whom he met on the Outer Banks and also loves surf fishing. John is also survived by daughters in Virginia Beach, Katharine Anne Newbold­Walker and her husband David, Susie Newbold Puente and her life-partner, Juan Garcia, a step-son, Andrew MacBlane and his wife Beth who live in New Hampshire, along with six grand­children and five great grand-children.

A Celebration of Life will be held at a later date. In lieu of flowers, please make donations to the NCBBA. Tight lines and bless the fish!