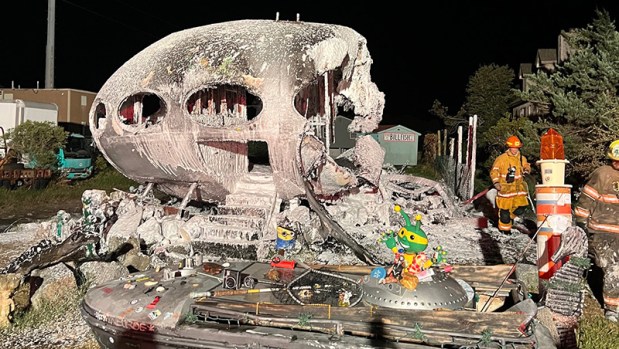 Fire Marshal John Risoldi with Kill Devil Hills Fire Department declared the Frisco spaceship structure a total loss. He said the cause of the fire is still under investigation. Courtesy Frisco Fire Department 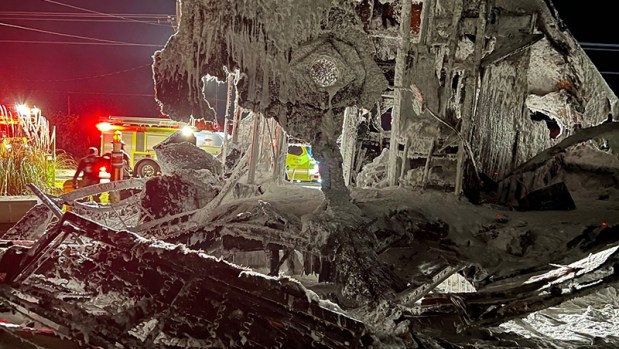 The call went out around 10 p.m. The Frisco “spaceship,” called a Futuro house, was completely engulfed in flames when the 10 Frisco Fire Department volunteers arrived with an engine and ladder truck.

Hatteras village firefighters came with six volunteers and another engine.

Frisco’s chief Dave Davidson, who arrived in his personal vehicle, took the command. The wind was blowing straight back. Other structures were not harmed.

No one was injured, reported John Risoldi, fire marshal with the Kill Devil Hills Fire Department. Dare County’s fire marshal Steve Kovacs was at a training class in South Carolina.

It was reported the building was made of fiberglass over metal.

Initially, firefighters used water from a close-by hydrant and hooked up five-inch hose across NC 12 to the Frisco engine, which required NC 12 to be closed.

From the engine, firefighters deployed two, inch-and three-quarter hoses and a two-and-a-half inch for standby.

After the attack with water, Class A compressed air foam was used to smother the fire.

Risoldi declared the famous building a “total loss.” The cause of the fire is “still under investigation,” reported Risoldi.

The Outer Banks History Center posted on Facebook that “the Futuro House has been an icon to some, and an eyesore to others, since it first landed on Hatteras Island around 1972.”

Over the almost 50 years, the structure has been used as a residence, an office, a hot dog stand, the Monitor Newsletter office and, most recently, a roadside attraction, stated the History Center post.

Originally conceived as the House of the Future back in the late 1960s, the Futuro house didn’t sell well, the History Center continued. Less than 100 were ever produced, and less than 20 still exist today.

Frisco Fire Chief Dave Davidson posted on Facebook: “Sad to report, Frisco lost a piece of history last night. The ‘Spaceship’ is no more. Thank you to all the Firefighters for a job well done! Chief 42”