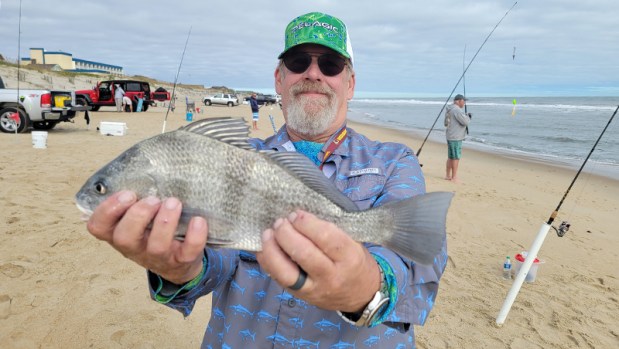 Wyatt Owens of Charlottesville, Va. shows off a nice black drum he caught and released during the tournament. Daryl Law photo 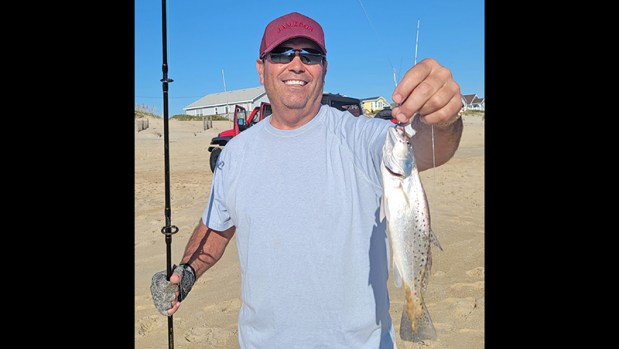 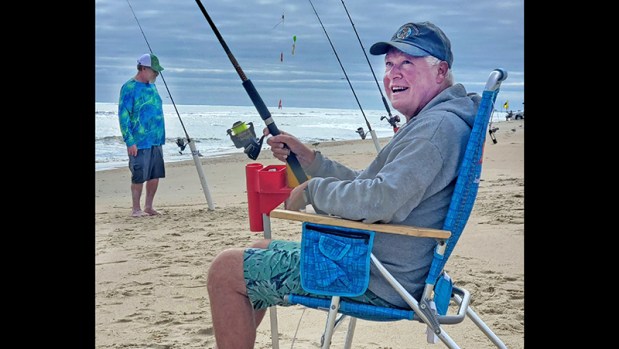 Barry Clark of Charlottesville gets comfortable during the four-hour session on tournament Thursday. He’s a member of the Extreme Team who celebrated their 25th straight tournament this time around. Daryl Law photo 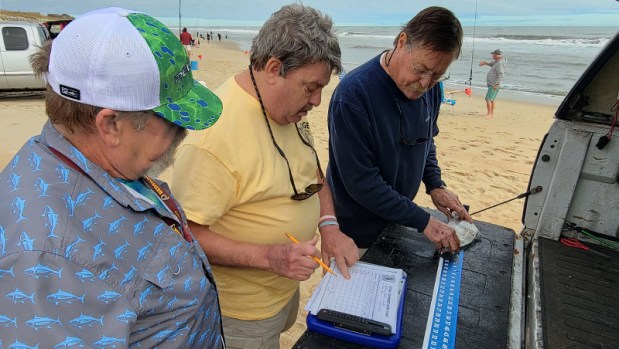 Extreme Team member Wyatt Owens, from left, looks on as judges Chris Wood and Cliff Blakely work together to measure and record a black drum that was 15 inches long and worth five points. Daryl Law photo

Around 480 anglers on 80 teams battled for bragging rights and some heavy-duty hardware during the 70th Annual Nags Head Surf Fishing Club Invitational Tournament Oct. 6-7. During three sessions totaling 10 hours of competition, big fish were caught and tall tales were born.

In the end, it was the Island Life Realty Fishing Team with Gale Johnson as team captain who took first with 26 fish for 69 points. They took home the big trophy and plenty of fishing gear prizes. The Fish Hawks took second overall with 14 fish and 67 points.

From there, “lady luck” played a big role in the year’s top teams, according to tournament director Dave Masters Jr. of Nags Head.

“Three of the top five were female or mixed teams,” he said. T.W.’s Mullet Mamas with Robin Stewart took first for female teams and third overall with 10 fish and 61 points. The Showstoppers were second for females and fourth overall with 16 fish and 53 points.

Heading into the tournament the weather was “challenging,” with high tides threatening beach driving, Masters said, but in the end, everything worked out.

“We had two beautiful days,” he noted.

After the pandemic made the evening socials difficult the past two years, having three straight nights of food and fellowship was awesome, fisherman said.

Because two other venues fell through late in the game, the tournament board felt fortunate that the hundreds of hungry and thirsty anglers wound up at Keeper’s Galley at Haven on the Banks in Nags Head, Masters said. Both inside and outside were comfortable mingling areas.

Another new development was the membership drive. Masters said that since it was the 70th tournament, the club decided to give memberships to everyone who participated.

“Anyone in the tournament got a free membership for 2023!” he said. “New memberships are $10, and renewals are just $15 so its economical.”

Masters said there was more than $8,000 in door prize and raffle giveaways thanks to community donations. Despite the time and energy that goes into the event, he noted they’re all ready to do it again.

“The board looks forward to doing it again next year!” Masters said.

For more on the club, go to www.nagsheadsurffishingclub.org.