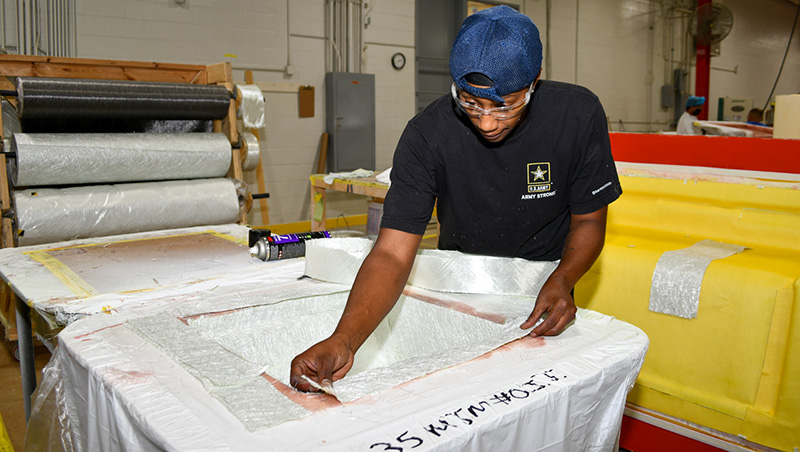 The dedication to their craft shows up in the work of Pamlico Yachtworks employees like Monshell Hill. The company will put eight new hires through an apprenticeship program at BCCC to ramp up its production line. Courtesy BCCC

Large boat orders have picked up and manufacturing companies are frantically trying to keep up with the demand. Eastern North Carolina yacht builder Pamlico Yachtworks, LLC (PYW) has found that it needs all its skilled workers on the production line, cutting into its labor-intensive training process, even as it brings on new employees to accelerate production. The company approached Beaufort County Community College with a novel way to train its new employees. PYW will send up to eight new hires through an apprenticeship program at the college. Employees taking part in the apprenticeship will be paid full wages while taking classes at no expense to them. The program will require new hires to attend class three days a week while working at the PYW facility for the remaining two days of the week. Prospective students who would like to take advantage of this offer must first be hired by Pamlico Yachtworks, LLC.

With luxury items like the 45-foot yachts that retail for over one million dollars apiece, there is little room for error. New PYW employees will practice building parts while in class and transfer those obtained skills to build small parts in the infusion department.

“We’re supporting [the BCCC boatbuilding] program and giving them some of the resources they need, which we have already committed to doing. It’s better for them to make a mistake in class, than to make a mistake out here on the production floor while building a million-dollar yacht,” said training and development manager Jerry Townsend. “But if we put them in that smaller, controlled environment where you can press pause, go back and re-lay this particular piece of fiberglass with resin so they really get the fundamental techniques down, they will apply that technique and allow us to increase their overall performance.”

The certification is geared toward the infusion process of PYW. Apprentices will take a 16-week course to space out class times with time in the plant. Apprentices will then work under Walberto Medina, small parts team leader, who brings over 20 years of experience to the field. The patient team leader will work with them to build their confidence as they craft small parts.

“We’re going to take that basic knowledge gained and turn it into finer points of detailed knowledge applicable to our processes,” said Townsend. “You learn the basic fundamentals [in the classroom], but you really don’t learn your job until you’re in the field. Here it’s going to be faster paced, and they’re going to see issues that come up and learn how to react and correct any mistakes that were made.”

This kind of controlled learning has already helped recent boatbuilding graduate Dustin Everett go straight into hull and deck construction instead of starting out in small parts, where many employees start on the shop floor. Everett said that even though he was not working on boats of that scale in the classroom, the exposure and the experience helped him start out ahead of other new hires.

PYW prides itself on having a tight-knit, familial workplace, encouraging new employees to “bring your ideas,” noted a press release from BCCC. Throughout the production line, dedication to their craft shows up in the work of employees like Monshell Hill. She was a chemicals specialist in the United States Army and worked in pressure washing and solar installation afterwards.

As a small parts producer at PYW, Hill is cheerful and thorough as she lays fiberglass textiles down that will be infused with epoxy, careful not to use too much adhesive, as she says that will cause problems. She prides herself on quality and wants to see a happy face on the future owners of the yachts she helps build.

Ideally, PYW would provide the opportunity for more of their employees to take advantage of this opportunity, but first, they need a backfill of talent from outside of its current workforce to keep up with customer orders.

“We’re getting a better quality of employees,” said Townsend of the apprenticeship, “because if they are willing to take the time to go to school and put forth that effort, then they’re really going to put forth that same effort here, so we’re growing our long-term employee pool.”

The company’s floor is packed full of boats in various stages of production, with teams of three to five people working on boats at each station as they move through the production process. The dedication to quality and craftsmanship is labor-intensive, so PYW has a stake in keeping its shop floor fully staffed.

The new apprenticeship program will keep production moving and infuse the shop floor with a new surge of talented employees.