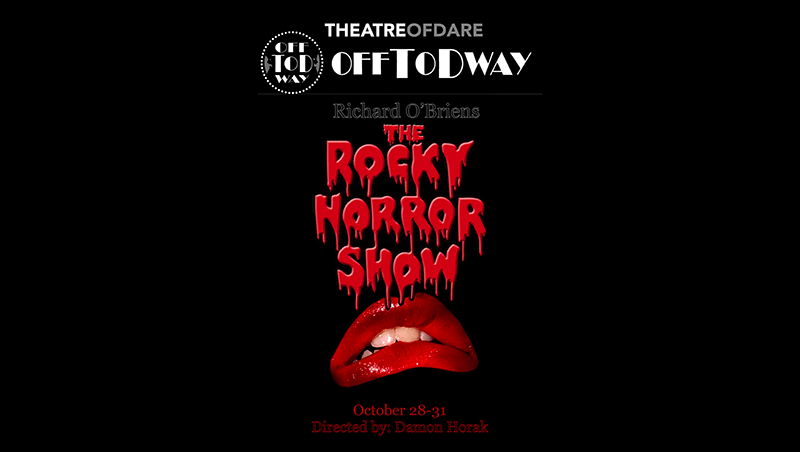 No one knew what to expect when Theatre of Dare stepped out of its comfort zone and into the high-heeled boots of The Rocky Horror Show in 2018.

“We had no idea whether our audiences would embrace the wild R-rated raunchiness of the show,” said Stuart Parks II, who played the lead role of Frank N’ Furter at the Lost Colony Sound Stage four years ago. “But we got an overwhelmingly enthusiastic response, so it seemed like a great time to bring it back into our new theater.”

Parks will revisit the role in this season’s revival, which is billed as a “Halloween extravaganza,” complete with costumed ushers and “goodie bags” to encourage audience participation.

“It’s going to be big bad bawdy fun,” said director Damon Horak, who is putting several new touches on the familiar show. “We’re encouraging anyone attending to wear costumes and to interact with the action on stage.”

For those that haven’t seen the show, or the 1975 cult-classic movie based on it, the comedy horror rock musical is a humorous tribute to science fiction and horror B-movies of the past. It involves sweethearts Brad (Evan Tillett) and Janet (Kelsey Thompson) who get stranded in a storm and seek shelter in the eerie mansion of Dr. Frank N. Furter (Parks II) and meet a house full of wild characters, including a rocking biker (Lara Parks) and a creepy butler (Rob Jenkins). Through elaborate songs and dances, Frank N. Furter reveals his latest delight: a muscular creation named Rocky (Logan Stem).

The deliberately kitschy show has become a staple of midnight cinemas and theater companies around the world, with audiences yelling, singing and dancing along to songs like Sweet Transvestite, Touch-a Touch-a Touch-a Touch Me and, of course, The Time Warp.

And for Theatre of Dare, four years was a long enough wait to do The Time Warp … again.

The Rocky Horror Show Halloween Extravaganza will perform Oct. 28, 29, 30 at 7:30 p.m. and Oct. 31 at 8 p.m. at Theatre of Dare, located at 3848 N. Croatan Highway in Kitty Hawk. Tickets are $20 and available online at www.theatreofdareobx.com. Advance purchase is highly encouraged, as seating is limited and will likely sell out. The show contains adult language and subject matter, so Theatre of Dare advises leaving the little ones at home.