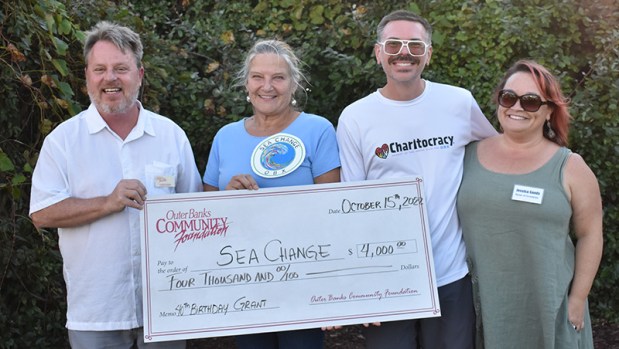 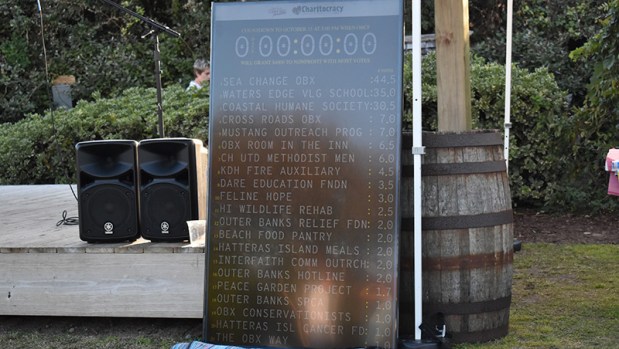 2. The final standings on the leaderboard after attendees had cast their votes on which local nonprofit would receive the coveted grant from OBCF. Danielle Puleo photo

The Outer Banks Community Foundation celebrated its 40th birthday at the Outer Banks Brewing Station on October 15. To honor the change it has brought to the OBX community, the Community Foundation partnered with Charitocracy Corporation to award a $4,000 grant to a local nonprofit organization. At the “Backyard Bash,” the power was placed in the community’s hands as to who would receive the grant. I

Community Foundation president and CEO Chris Sawin was excited to explain how the partnership with Charitocracy had been in the works for a while. “It is a real full circle,” he said to The Coastland Times during the birthday celebration. Charitocracy co-founders Jessica Sands and Benj Lipchak were part of the foundation’s giving circle in the early 2010s, which gave families the opportunity to get involved in giving back to their communities. The couple had approached Sawin about the possibility of bringing such a concept back, but through their online donation platform.

Each month, Charitocracy allows donors to contribute any amount to their favorite local nonprofit. With the donation comes a chance to vote for a nonprofit organization that will be entered into a running to win a grant for their cause. Those nonprofits that do not win will keep their votes from the prior month and continue to partake by means of votes from the community to win a grant.

“They were really an inspiration,” said Sawin in regard to the philanthropic couple. “We like working together. We’re hoping that for Charitocracy, our place in the nonprofit sector can help celebrate these monthly winners.”

“We started talking a year ago,” Lipchak said, “and started to think about the 40th anniversary and how we could bring in a new initiative. This was a game-changer.”

The Community Foundationhad an endowment left over from the giving circle, and offered those funds to Charitocracy to begin using on future costs. “Our plan is to take a distribution from it each year and make each award a little bigger,” Lipchak explained.

“Charitocracy has more of a younger base, more digital,” said Sawin. “The Community Foundation is more legendary, with some titans of business on the Outer Banks to put something back into the community. We are entirely independent … we like working together.”

Lipchak noted, “The foundation has been very generous and it’s been a really fun collaboration.” The co-founder shared in just that day alone, he felt their donor base had probably doubled.

Throughout the course of the celebration, attendees had the chance to listen to small speeches from over 20 local nonprofit organizations. The representatives shared what their nonprofits were doing to make a difference and votes were cast. The leaderboard was displayed so everyone could see who was winning live on the screen.

Towards the end of the event, Sawin, Sands and Lipchak took to the stage to announce the winner. The countdown began at the final 10 second mark, which culminated in Sea Change OBX becoming the first recipient of the $4,000 grant.

Sea Change OBX is run by Kay Minis and Jessica Loose; Loose was present to receive the award on stage and speak about what their mission is in the community. “Sea Change is a Latino outreach program that I started after I retired from teaching in Dare County Schools,” she explained. The goal of the nonprofit is to offer English instruction to adults to help both themselves and their children. Loose shared that every Tuesday night, she and her volunteers head to Nags Head Elementary School to teach those that are signed up.

“One post on Facebook and we have had enough shares that we’re expecting 70 people to show up on Tuesday night,” Loose shared with the crowd. “As a result of the networking here today, I’ve already made connections with some other nonprofits like to share our services.”

Loose thanked all involved and was welcomed over to the side of the stage for a photo op with her grant award.

“The beautiful thing about this setup is that every month another nonprofit will win,” said Sands. “Don’t lose faith, keep getting people to sign up and keep voting.” Sawin added, “We set this contest up just to let other people do what we do and get involved in philanthropy. Jessica told me that this isn’t something that would help her budget, this may be her budget. And the work that they’re doing in the Hispanic community, it’s just wonderful that you’ve won.”

To learn more about how to take part in giving back to the community, visit www.obx.charitocracy.org.