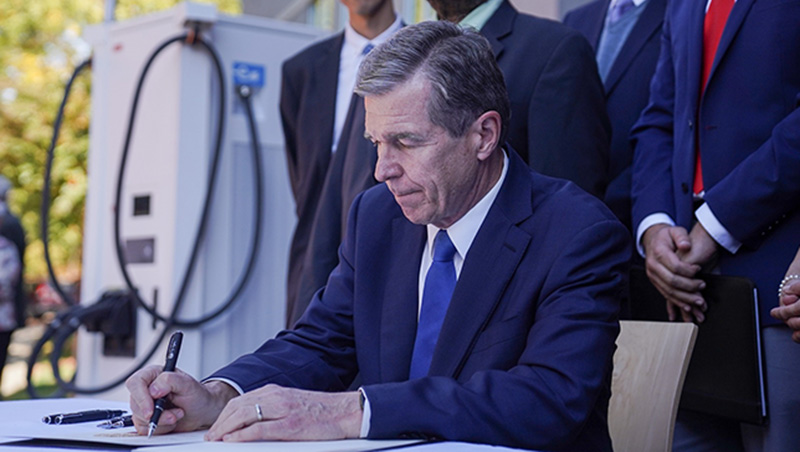 Signing an executive order at the North American headquarters of electrical equipment company ABB, Cooper said the proposed rule and other activities he directed would help cut pollution from medium- and heavy-duty vehicles and promote charging and fueling infrastructure needed.

“North Carolina is already a national hub for truck and bus manufacturing and supply chain development, and we should not miss the opportunity to lead the market-driven transition already underway to cleaner and increasingly cheaper zero-emission technologies that benefit our economy and our communities,” Cooper said in a news release.

The anchor of last Tuesday’s order tells the Department of Environmental Quality to propose the Advanced Clean Trucks Program to the Environmental Management Commission by next May. The commission then would have to sign off on any proposal to make it enforceable.

Six other states have adopted such a program including California, New York and Massachusetts, Cooper’s office said.

Cooper’s office said the program would apply to what’s called medium- and heavy-duty vehicles, whose gross vehicle weight rating is at least 8,500 pounds (3,856 kilograms), such as delivery vans, garbage trucks, school buses and semi-tractors. It said zero-emission vehicles can include hybrid plug-in vehicles that do have internal combustion engines.

The required sales shares of zero-emission vehicles by manufacturers under the program would increase over time from 10-13% in 2026 to 40-75% in 2035, depending on vehicle sizes, the governor’s office said.

The vehicles targeted for replacement in the program compose just over 3% of registered vehicles in North Carolina, but they emit 26% of smog-forming nitrous oxide emissions. according to Cooper’s office.

The order comes several months after the Democratic governor unveiled another series of clean-vehicle initiatives, such as directing his Department of Transportation to create a “Clean Transportation Plan” to reduce carbon emissions.

There are now more than 125 medium- and heavy-duty zero-emission models available in North America, Cooper’s office said. Federal laws in 2021 and 2022 include grants and loan programs to support manufacturing as well as some tax credits to replace commercial gas or diesel vehicles that offer up to $40,000 per vehicle.

Low-income neighborhoods and communities of color are more likely to be near transportation corridors and freight hubs, according to Cooper’s office.

Any final Environmental Management Commission rule would be subject to additional scrutiny by a state rules panel. It’s also possible that the General Assembly could formally vote to block any rule.

In a tweet, Republican House Speaker Tim Moore said that while the executive action was being reviewed, “I can’t help but think that now is not the time for expansive, burdensome new mandates for our trucking industry while inflation and supply chain issues continue to crush NC families.”

Cooper joined a multistate memorandum of understanding in 2020 that would seek to increase sales shares of zero-emission medium- and heavy-duty vehicles to 30% by 2030 and 100% by 2050.