Cape Hatteras soccer wins 3-2, goes to second round in states 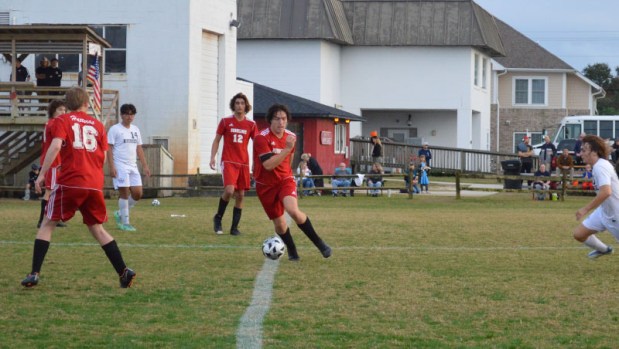 Cape Hatteras senior Gavin Thompson (No. 8) defends against Riverside-Martin in the first round of state playoffs held on the Buxton soccer field on Halloween night. Mary Helen Goodloe-Murphy photo 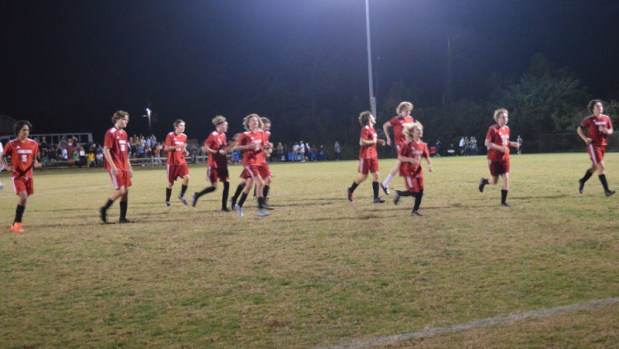 Cape Hatteras soccer players run off the field after defeating Riverside-Martin 3-2 in the first round of state playoffs. Mary Helen Goodloe-Murphy photo

Cape Hatteras Secondary’s boys soccer team advanced to the second round of state playoffs after a closely contested first round match against Riverside-Martin from Williamston.

The Hurricanes will play again Thursday, November 3 at Perquimans High School in Hertford at 6 p.m.

The Cape Hatteras Hurricanes defeated Riverside 3-2 on the soccer field in Buxton on Halloween, October 31.

In the first 20 minutes, Riverside played aggressive soccer and with just over 19 minutes left in the half, Allen Vazquez scored the Knights first goal.

The scored kicked up the play of Cape Hatteras. With 4:25 left in the first half, senior Dylan Watters came roaring down the sideline avoiding the opposition and scored the Hurricanes first goal.

Cape Hatteras struck first in the second half. Three minutes in, senior Lucas Blankenship pushed the ball into the net for the go ahead 2-1 goal.

The teams battled with both making shots on goal. Riverside’s Champ Tice denied the Hurricanes shots on goal, as did Noah Baker for Cape Hatteras.

With 10 seconds to go, Teigan Augustson took a shot on goal. The referee signaled goal to put the Cape Hatteras Hurricanes ahead 3-2. Ten seconds was added to the clock and the two teams finished the game.

During the match, two Riverside players were injured. In the “good game” lineup at the end of the match, Cape Hatteras players went to the Riverside bench to include the injured players.

It was Halloween and fans wore costumes. A raffle was held at half-time with items and gift certificates from island businesses.