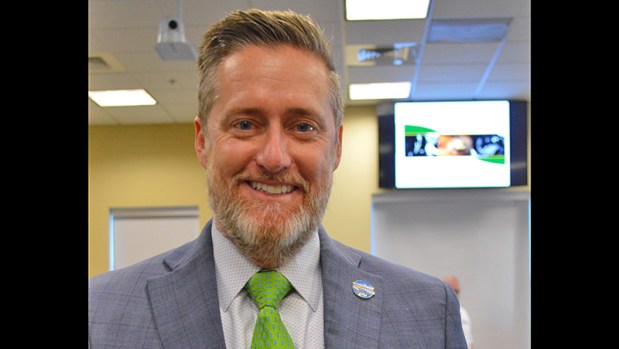 Rob Williamson with Evergreen Solutions, LLC presented a comprehensive salary and classification study to Dare County Board of Commissioners on October 27, 2022. Action by the commissioners is expected at the November 7 board meeting, which starts at 9 a.m. Mary Helen Goodloe-Murphy photo 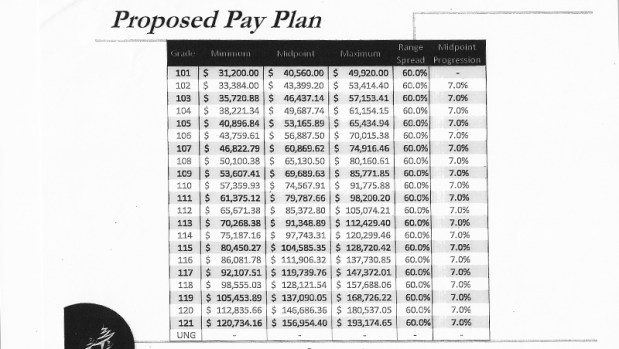 The proposed pay plan as presented to Dare County Board of Commissioners on October 27, 2022. Evergreen Solutions recommended 21 grades. The proposed plan has consistent range spreads and progression between grades.

On Thursday, October 27, the Dare County Board of Commissioners received a much-anticipated salary study prepared by Evergreen Solutions.

Board action on the study is expected at the November 7 meeting of the commissioners.

The study found that 72.8% of all employees are below their pay grade mid-point.

The study also found that the county is behind market in salaries.

The consulting firm recommended an adjusted pay plan with a total of 21 pay grades and reassigning positions to pay grades based on internal equity and market results.

The recommendations include a hybrid pay plan that corrects wage compression. Such a plan would establish a plan that is internally and externally equitable, states the presentation.

The hybrid parity plan will require $3.5 million in salary-only increases annually. The estimated amount with fringe benefits is $4.4 million annually.

Finance director David Clawson told the commissioners that implementation was possible in January 2023 as estimated funding was included in the current fiscal year budget. About $562,000 will need to be covered out of the General Fund and varying amounts out of six other discrete funds such as water and sanitation.

The study distributed a job assessment tool survey and reported that 88.17% of all employees and 90.42% of supervisors participated. Two days of in-person employee meetings were held and included five orientation sessions, 15 focus groups and seven senior leadership interviews.

Positive comments emerging from the employee meetings as summarized in the presentation were:

“Benefits – The opinion was mixed but most viewed the benefits as a main reason for originally seeking employment and remaining with the count.

“Culture – Several employees described the quality of people and the quality of the relationships with their coworkers as an important reason they’ve stayed with the organization.

“Community Impact – Many employees felt that by working for the county they could make a difference for their community, which was widely valued.

“Location – Employees commented on the unique beauty of this area as a benefit.”

Concerns that emerged from employee meetings were:

“External Equity – Employees generally felt that their starting pay is lower than in neighboring municipalities and that it is becoming increasingly difficult to recruit and retain talent.

“Internal Equity – Many employees shared their concern with wage compression as new employees are brought in at a higher rate than tenured, more experienced employees.

“Housing Affordability – Several employees mentioned the lack of affordable housing as having a significant impact on the ability to recruit talent.”

Rob Williamson with Evergreen Solutions told the commissioners that in the competitive labor market a shift has been noted as to the type of work wanted.

As to compression, Robert L. Woodard, board chairman, commented “we’ve not done a COLA [cost of living adjustment] on a regular basis. That might have added to compression.”

County manager Robert L. Outten commented “we don’t have a mechanism to move someone up grades.”

Under the proposal, once the grades are reset, compression will be managed with cost of living adjustments and performance merit.