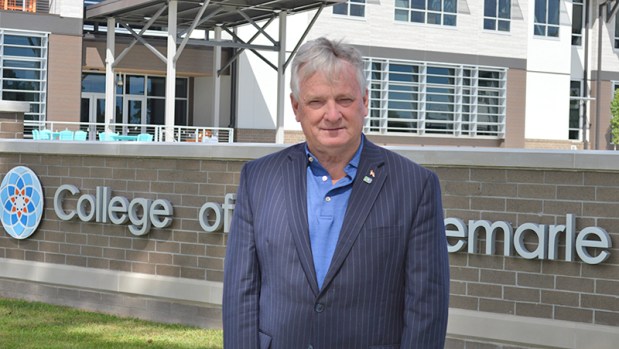 On his September trip, State Treasurer Dale R. Folwell toured the new College of The Albemarle building on Roanoke Island. In his role as state treasurer, Folwell twice approved the financing for the new facility: once at the State Board of Community Colleges and again at the Local Government Commission. M.H. Goodloe-Murphy photo 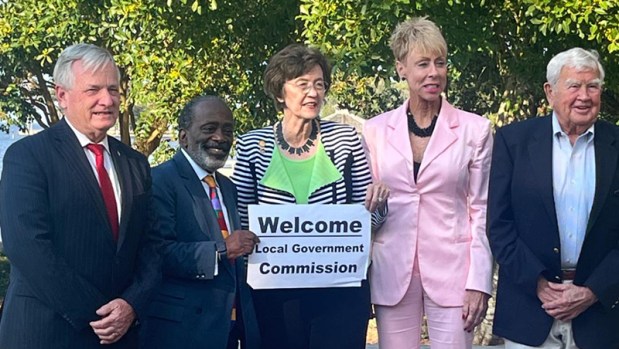 In late September, Folwell brought the Local Government Commission to Tyrrell County for a regularly scheduled meeting. It was the first time the commission has met outside Raleigh. The commission will hold its November meeting in Cullowee in western North Carolina.

Folwell chairs the Local Government Commission as one of his duties as treasurer.

His second visit to the region was Oct. 17. This visit was to Elizabeth City where he talked about introduced legislation titled Medical Debt De-Weaponization Act.

He has also released the report “Overcharged: North Carolina Hospitals Profit on Medicare.”

Folwell and the staff in the Department of the State Treasurer oversee the health care plan for 740,000 current state employees plus retired public employees.

The supplemental bonus is an additional 4% of the retirees’ annual benefit and was included in the October check.

Folwell and his staff oversee the $122 billion in the state retirement fund of the North Carolina State Retirement System.

Go to ncable.nc.gov for lots of information.

The commission now oversees at least 1,100 units of local government.

Commission members include elected officials Folwell; State Auditor Beth Woods; Secretary of State Elaine Marshall; and Secretary of Revenue Ronald Penny. All were in attendance at the Tyrrell County meeting at the Eastern 4-H Center.

Five public members are appointed. Three appointed by the governor are John Burns, former Wake County commissioner; Vida Harvey, vice president and assistant general counsel, Novant Health; and Nancy Hoffman, current member of Greensboro City Council. Paul Butler Jr., former county manager of Sampson County and former chair of NC Parole Board, is appointed by the president pro tem of the NC Senate. Mike Philbeck, appointed by the NC Speaker of the House, is a real estate broker and former Mayor of Shelby. The governmental positions of appointees are dictated by Chapter 159.

The Local Government Commission is involved in all borrowing moves made by local governments and overseeing the fiscal health of county and municipal governments, hospital authorities and water and sewer districts.

Dare County’s finance director David Clawson regularly comes before the county’s Board of Commissioners with a date a limited obligation bond package will be on the commission’s agenda. In the case of recently approved phases for capital improvements for Emergency Medical Services stations, the date for Phase I is currently scheduled for February 2023. The next phase may be as late as February 2024.

When governments get in fiscal trouble, the Local Government Commission assumes responsibility for running the government until it is financially strong. Staff members make on-site visits and provide support to local governments in fiscal distress.

In 2020, Tyrrell County was very, very close to defaulting on payments for sewer lines installed for the Tyrrell County prison. In September 2019, the state’s Department of Public Safety completely shut down the prison. The county and Town of Columbia thought the department would conduct a slowdown in facility numbers. The prison was the largest customer of the water and sewer system.

With Tyrrell a few days away of declaring bankruptcy, Folwell asked Gov. Roy Cooper to pay the prison’s bill, estimated at $304,735.73.

Folwell argued “the state should hold harmless local governments like Tyrrell County and the Town of Columbia.” The state paid its bill.

For three years, the state has continued to pay debt service, reported Clegg.

Since 2019, Tyrrell County has remained on the Unit Assistance List. Evaluation of the county’s internal control issues and financial issues with water and sewer fund are now listed as low risk. However, high risk is assigned to the category “Financial Issues General Fund.”

The problem is the fund balance has not met the required 8% set aside.

Clegg responds, what is an appropriate amount for fund balance? The county has 3,134 people and can only tax 47% of its land. The county has a $6 million budget.

The matter has been resolved using COVID funding. The general fund balance now stands at 13% to 14% reports Clegg.

As of July 31, 2022, the list indicates that Hyde County had not filed its annual audit for the fiscal year ending June 30, 2021. That has been resolved said Corrine Gibbs, finance director for Hyde County.

The Engelhard and Swan Quarter Sanitary Districts have also failed to submit audits for both fiscal year 2021 and 2020. The two Hyde County districts are among five on the Unit Assistance List.

Some 740,000 current state employees and retired public employees depend on the Department of the State Treasurer to run a massive health care system, the North Carolina State Health Plan for teachers and public employees.

Making the decisions is a 10-member Board of Trustees with Folwell chairing the group. The board is made up of “experts in medicine, health administration and education.” The board designs employee health benefits.

Naturally, Folwell is interested in talking about medical costs.

“The report found huge disparities between the Medicare losses claimed by hospital executives and the numbers that hospitals reported to the federal government,” states a media release. “This raises serious concerns over hospitals’ commitment to their patients and their charitable mission, and the steep costs passed on to the nearly 740,000 members of the State Health Plan.”

North Carolina was in the top 10 states with the highest average hospital Medicare profit margins for five years, according to Medicare Cost Report data.

“Only 15 hospitals consistently lost money on Medicare, while 35 hospitals posted profits over all six years in North Carolina,” according to Medicare Cost Report data.

In the report, five years of data from the hospitals’ federally-reported Medicare Operating Profit Margin or the Medicare Cost Reports show The Outer Banks Hospital with profit margins running from 1.3% to 1.9% over the five years.

In another effort, Folwell pushed for the introduction of legislation called the Medical Debt Protection Act, H.B. 1039, filed May 24, 2022. The legislation seeks “to limit the ability of large medical facilities to charge unreasonable interest rates and employ unfair tactics in debt collection …”

The department under Folwell’s leadership has another function. It pays the state’s bills and accounts for all funds deposited and invested. And it is charged with maintaining the state’s AAA bond rating.