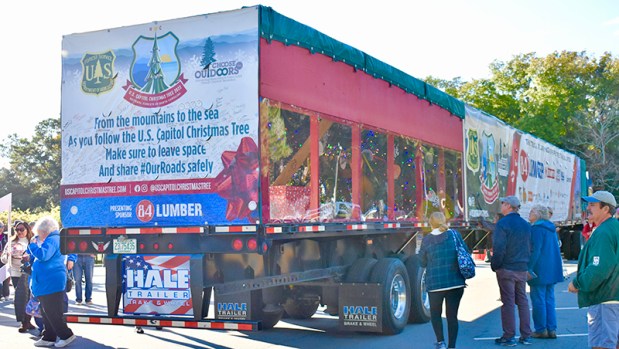 Ruby the red spruce tree is the third tree from North Carolina to serve at the nation’s capital since the tradition was started in 1964. Danielle Puleo photo 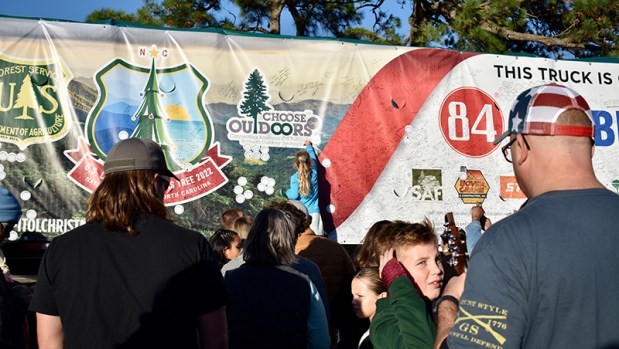 The Outer Banks community was welcomed Sunday afternoon to take a peek at this year’s U.S. Capitol Christmas Tree and sign the truck that will bring the tree to its final destination. Danielle Puleo photo 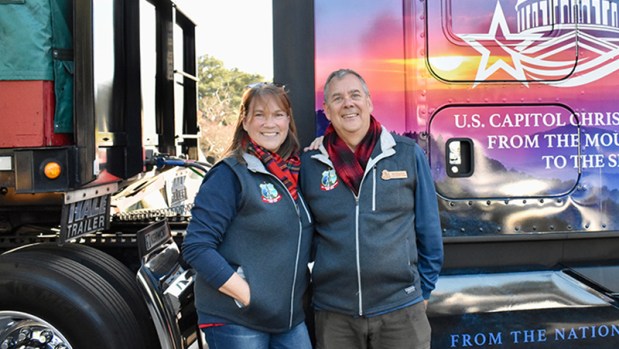 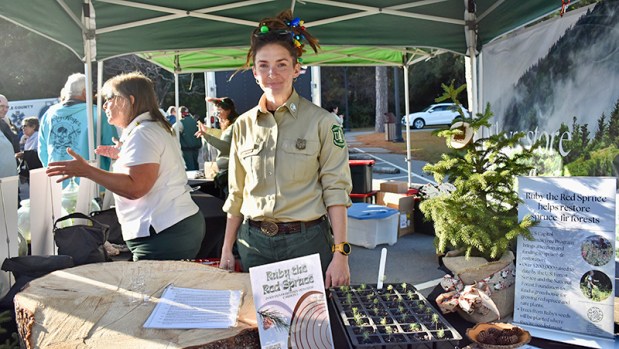 Pisgah National Forest zone silviculturist Rachael Dickson, who climbed “The People’s Tree” many times before she was harvested to look for endangered species. Danielle Puleo photo 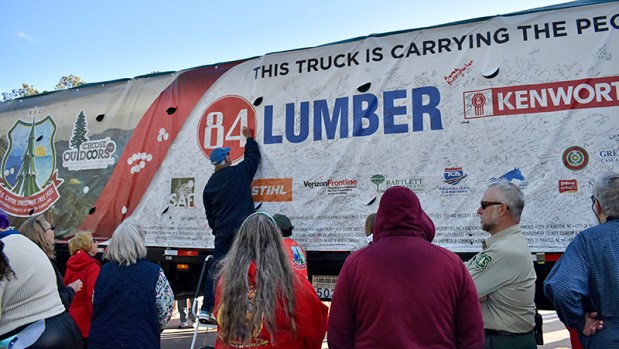 Those who came to see “The People’s Tree” on Sunday afternoon at Fort Raleigh National Historic Site had the chance to sign the 102-foot-long Hardy Brothers truck that has carried the red spruce across the state, from the mountains to the sea. Danielle Puleo photo

The 2022 U.S. Capitol Christmas Tree made its 14th stop at Fort Raleigh National Historic Site Sunday afternoon before hitting three other communities on its way to the U.S Capitol Building. While marveling at the beauty of “Ruby,” this year’s choice of tree from the Pisgah National Forest, attendees enjoyed a performance by the Manteo Elementary School Choir, ornament making, a visit from Santa and Mrs. Claus and the chance to sign the truck that will carry Ruby nearly 1,000 miles to its final destination.

Each year, a different national forest is chosen to provide a tree that will light up the West Lawn of the U.S. Capitol building for the holiday season. Ruby is the third tree from North Carolina to serve at the nation’s capital since the tradition was started in 1964. Ruby was one of eight candidates from Pisgah National Forest to be selected as this year’s Capitol Christmas Tree. Her 78-foot-tall picturesque frame, long cascading needles and gorgeous green coloration stand out through the see-through back-end of the Hardy Brothers 102-foot-long truck that has transported her along her journey.

Ed and Deborah Kingdon with Hardy Brothers Trucking were approached in July with the unique task of hauling this special tree through the mountains and valleys of North Carolina. After retiring from the military in 2019, Ed convinced Deb to her CDL so they could team drive trucks together and spend time out on the open road.

“I’ve always wanted to drive a truck, what little boy doesn’t want to drive a big truck?” Ed told The Coastland Times. The couple readily agreed to drive the red spruce across the state without knowing much about the journey. “We didn’t realize all of the stops that were involved,” said Deb, “but we’re really enjoying it.”

After completing a dry run with the truck in September, Ed and Deb met the National Forest team out in the spruce-fir forest nestled in the southern Appalachians of western North Carolina.  There, Ruby was harvested, but not before being cleared for the trip.

This year’s Capitol Christmas Tree has been through the rolling hills of western North Carolina, the parkway tunnels and now the bridges that connect Roanoke Island to the mainland. Not only have communities all over the state been able to see Ruby in all her glory, but this trip has spread the word about red spruce restoration.

“Ruby is going to live on,” Ed shared excitedly. “Her branches are going to be used for biofuel, the trunk will come back to North Carolina because red spruce makes beautiful instruments – violins, mandolins, things like that – and they are harvesting her seeds.” Red spruce restoration has been underway for years now, and the reason for choosing a red spruce to serve at the U.S. Capitol was in part to “bring to light” the need for more of this tree species.

“There’s a lot of energy and enthusiasm for red spruce restoration,” Dickson said. “This is one of the rarest ecosystems in the country and restoration has been going on for the last 10 years.” Within the last year, funds have been raised for a greenhouse to aid in red spruce restoration. Ruby’s seeds will live on to start more red spruce trees in an effort to combat extinction.

Awareness has spread across county lines. Along the way, people from all over the state have signed the vehicle that will transport Ruby to her final destination. Roanoke Island was full of holiday cheer while the red spruce was on display in the brightest of Christmas lights.

After the pit stop in Fort Raleigh on Sunday, Ruby went on her way to Suffolk, Va., North Chesterfield, Va. and finally Joint Base Andrews, Md. before she arrives in Washington D.C. on November 18. To learn more and to track Ruby’s journey, visit uscapitolchristmastree.com.