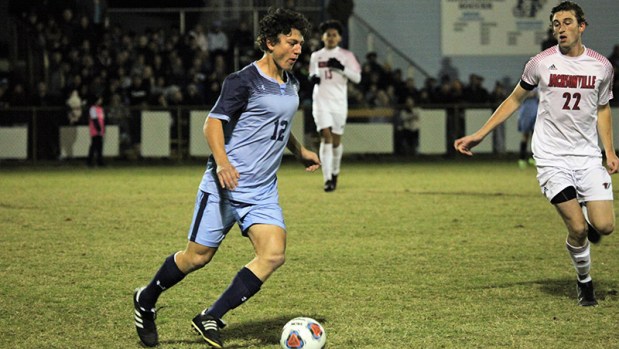 First Flight’s Kai Reece moves the ball down field during the first half of play Wednesday night. Daryl Law photo 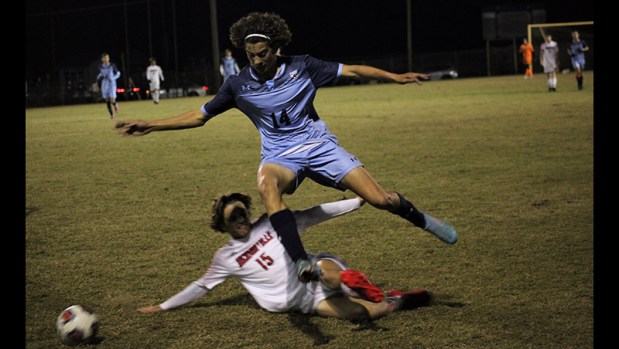 Nathan Tsonev leaps over a Cardinals defender while pushing the ball down field. He had the opening goal in the match, which First Flight lost 2-1. Daryl Law photo 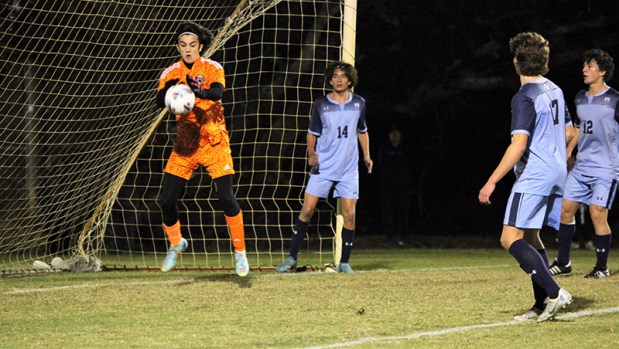 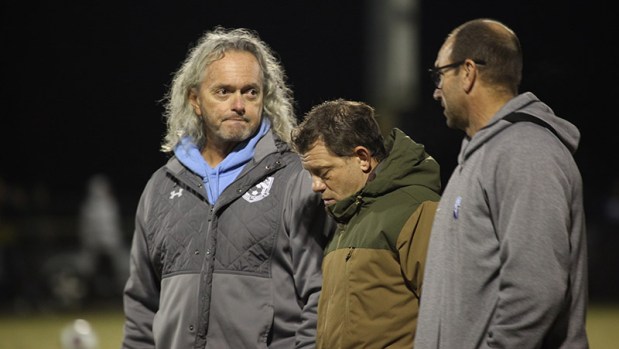 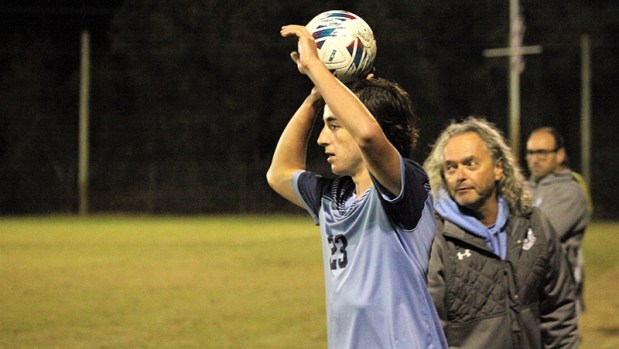 In the closing minutes of the game, Taylor Summerton looks to throw the ball in while Juan Ramirez coaches him the background: “Take a deep breath, take a deep breath.” Daryl Law photo

Energized by a large crowd and a crisp, cold night, the First Flight Nighthawks jumped out to an early one goal lead over visiting Jacksonville during the Eastern Regional 3A Championship match in Kill Devil Hills on Wednesday.

“Let’s go boys!” their battle cry rang out all night.

The first minute goal by sophomore Nathan Tsonev created a 1-0 score and pumped up the crowd. There were hundreds there, perhaps more than a thousand fans. Curren Breiholz had the assist.

The ’Hawks held off the aggressive Cardinals squad until halftime thanks to some excellence defense and goal keeping by junior Ben Stamp.

But eventually, Jacksonville did put two shots in the back of the net and claimed the championship with a 2-1 score. After the game, some of the defeated First Flight players hung their heads, but coach Ramirez said otherwise.

“Get your heads up high, you played a heluva game!” he said. “The ball didn’t bounce our way – no tears!”

The coach also offered positive comments with Stamp, who played his heart out in the match.

“You got us here, you got us here,” Ramirez said and gave Stamp a hug. Coach was referencing Stamp’s excellent post-season play, especially protecting the goal against Carrboro during a shootout that decided the game last week.

After the guys accepted the runner-up trophy, coaches Ramirez and Jason Breiholz shared their thoughts about the game, the season and the soccer dynasty at First Flight.

As for the quick Tsonev goal just 15 seconds into the match, the coaches said they had that play ready to execute.

“You don’t expect it so soon, we had worked on that play to capitalize quickly,” Ramirez said.

In general, coach Breiholz said the match could have gone either way.

“We had our chances,” he said. They agreed two critical mistakes hurt them. For Ramirez, there’s always another season.

“We’re looking forward to next year, we have a lot of returning starters.”

First Flight went 17-3-2 this year and won the conference championship. In the 18 years since the school opened, the men’s team has captured two state 2A championships and won four of five of the nine regional championship they’ve been in. The women’s program has had similar successes.

“Everybody played well, like coach said, we just made a couple silly mistakes,” coach Breiholtz added.