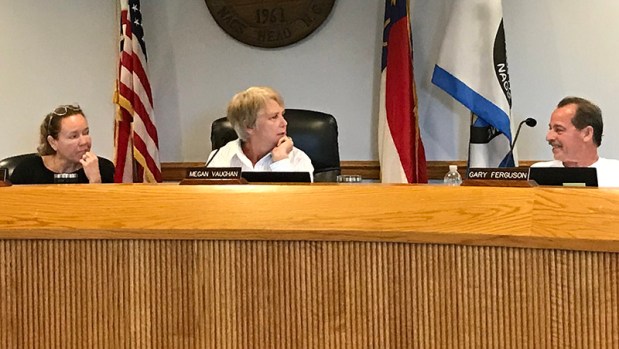 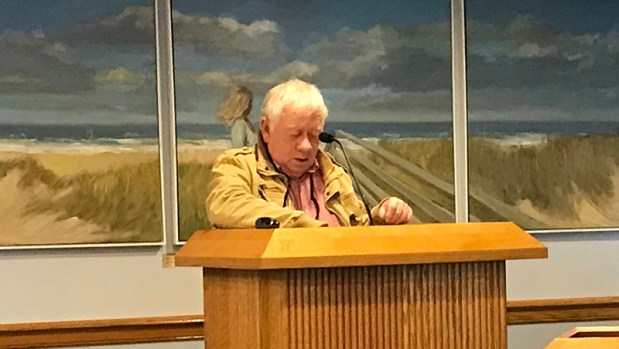 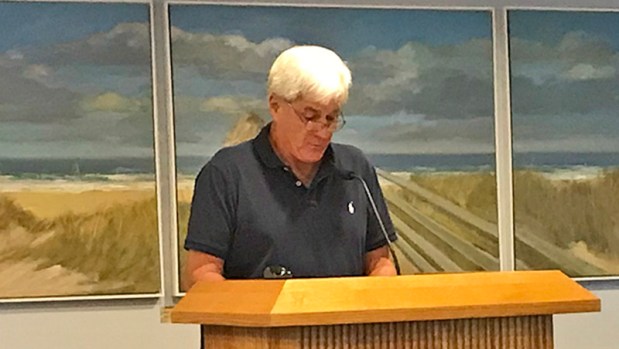 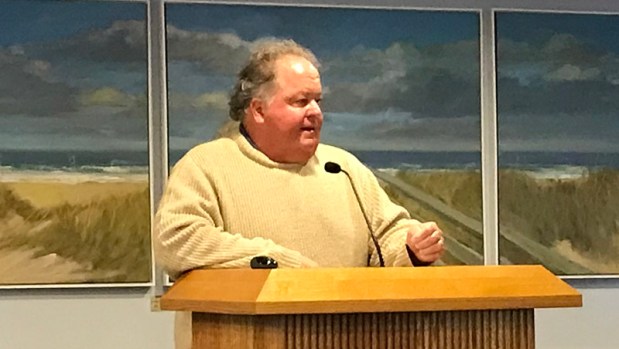 Basil Belsches, from the Old Nags Head Place neighborhood, expressed concern to the Planning Board that the affordable housing proposed does not match the spirit and character of the surrounding neighborhoods. Judy Stiles photo 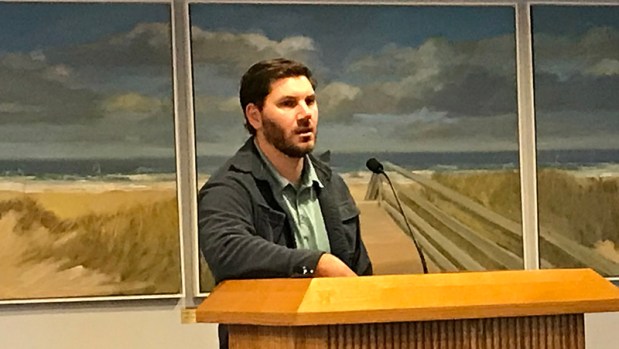 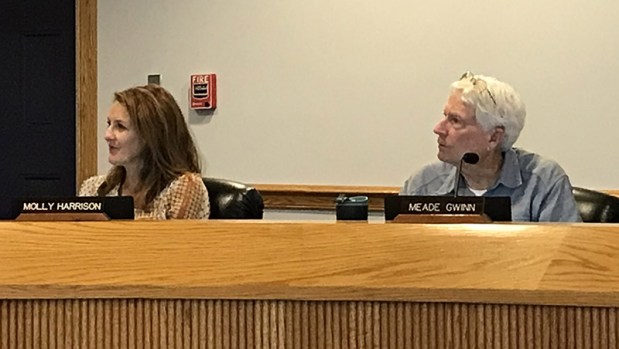 Nags Head Planning Board Chair Megan Vaughan called the November Planning Board meeting to order at 9 a.m. on Tuesday, Nov.15. All Planning Board members were present for the meeting. Following the approval of the agenda, audience members who wished to comment were invited to come forward.

Rick Arthur, who owns a house on S. Memorial Ave., expressed opposition to the affordable housing project proposed by housing developer Woda Cooper for the corner of Hollowell St. and U.S. 158 across from Jockey’s Ridge State Park. Arthur stated he had followed the Nags Head Board of Commissioners meetings and saw a presentation given by planning director Kelly Wyatt. He emphasized the area’s unique nature and character would significantly change if multi-story affordable housing buildings were built in the area. Arthur indicated that he and his wife Barbara support something of lower density that matched the spirit and character of the surrounding neighborhoods.

Basil Belsches, from the Old Nags Head Place neighborhood, echoed Arthur’s concerns. He pointed out that the 2017 Comprehensive Plan designated several areas as neighborhoods of character. He stated that a 54-unit apartment complex did not meet the intent of keeping the look or feel of the area. Belsches asked the Planning Board members to consider a more appropriate zoning designation away from commercial C-2 to a less impacted zoning designation.

Michael Mischou, who lives on S. Memorial Ave., spoke against zoning for an affordable housing project in his neighborhood. Mischou disagreed with zoning that would allow multiple housing units as he said it was a permanent solution for a temporary problem.

Chris Greening of TW’s Bait and Tackle submitted a consideration of special use permit\site review plan for the business located at 2230 S. Croatan Highway. The property is zoned C-2 General Commercial. The special use permit requested the reduction of three required parking spaces, to be replaced with three bicycle racks pursuant to Section 10.15.2.5 of the Unified Development Ordinance.

Nags Head planning director Kelly Wyatt stated the proposal is consistent with the applicable use and development standards and relevant land use policies and recommended approval of the permit.

Greening said the work will make it possible to accommodate bikers, who now often slant their bikes against the windows. Additionally, a renovation planned for the inside of the building will require five additional parking spaces which can be accommodated by the reworking of the parking area.

The Planning Board unanimously approved the plans.

Deputy planning director Kate Jones presented a draft of an appendix for the Nags Head tree preservation regulations that had been requested by the Planning Board. Jones presented the draft appendix and stated the regulations have not changed but the appendix synthesizes information and resources to make it clearer to understand.

Planning Board member Megan Lambert discussed the importance of trees in relation to stormwater management and supported the regulations to protect trees.

Vaughan asked for clarity on nuisance trees. Jones specified that pruning and cutting limbs to keep them off your house and deck is allowed. Situations which permit tree removal include a tree, on private property, that is likely to fall and cause injury; trees that are a threat to public facilities or services, or a tree that is in irreversible decline due to disease.

Planning Board members praised Jones for improving the clarity on the document and unanimously approved the appendix.

Discussion of the Historic Character Area

Wyatt introduced the discussion on the historic character area and provided background on the commissioners’ moratorium on most development located within the C-2 General Commercial Zoning District applicable to the areas from Danube Street north to Hollowell Street, between US Highway 158 and NC12.

The C-2 zoning district allows the broadest range and the highest intensity of uses in the town. Several of the town’s largest shopping centers are located in the C-2 District. The town’s comprehensive plan suggests that C-2 zoning is not appropriate in the historic character area and that further study is needed to establish appropriate standards for this area.

Any recommended ordinances or zoning map amendments will be forwarded to the Board of Commissioners for scheduling of a public hearing.

Wyatt stated that it is important preserve the character of Jockey’s Ridge and the Historic Cottage Row, which is a National Register Historic District consisting of 41 contributing homes along the oceanfront and two structures on the west side of NC 12.

Following Wyatt’s overview, Ferguson asked if multi-family housing is included in the list of businesses allowed. Wyatt responded it is allowed in the C-1 zoning, she continued, “when looking at the requirements of the C-1 in terms of square footage, some of the uses that are allowed in the C-1 might be difficult to actually develop in the C-1 because of the maximum allowable square footage.”

Planning Board member Molly Harrison asked what would happen to current businesses if the area is dropped to zoning C-1. Wyatt responded that the businesses would be in non-conformity but would be allowed to remain. The businesses could not expand beyond new regulations but actions occurring within the existing building footprint should be allowed and do not constitute an increase in the degree of structural nonconformity.

Ferguson asked whether planning staff had recommendations and Wyatt responded she does not have a recommendation but it is likely there will need to be a combination of C-1 and possibly amendments to the C-1, R-1 and other zoning districts and it is unlikely there will be a single zone for the entire area. It is possible an overlay will be needed for some areas.

As the discussion wrapped up, Ferguson summarized, he felt an important goal is to minimize nonconforming issues and speculated whether C-2 zoning should remain the same along Route 158. Elder encouraged Wyatt to develop a chart to figure out where there is unity and begin from the unity. Planning Board member Meade Gwinn indicated it is important to review the full situation to understand the issues.

Vaughan recapped the importance of the short timeline and thanked the residents who came forward to provide their thoughts about the Historic Character Area. Elder and Wyatt agreed and encouraged residents present at the meeting to reach out to their neighbors.

Wyatt provided an update on the short-term rental program.  In April 2019, the Board of Commissioners adopted amendments to the Town Code and Zoning Ordinance (now the Unified Development Ordinance) defining short term rentals (STRs) and establishing regulatory requirements and a voluntary registration program for short term rentals.

The town requested the information to:

Planning staff is working with the town attorney to better understand the outcome of this ruling and how it affects the town’s local regulations and put into place a process to continue to regulate STRs within the town.