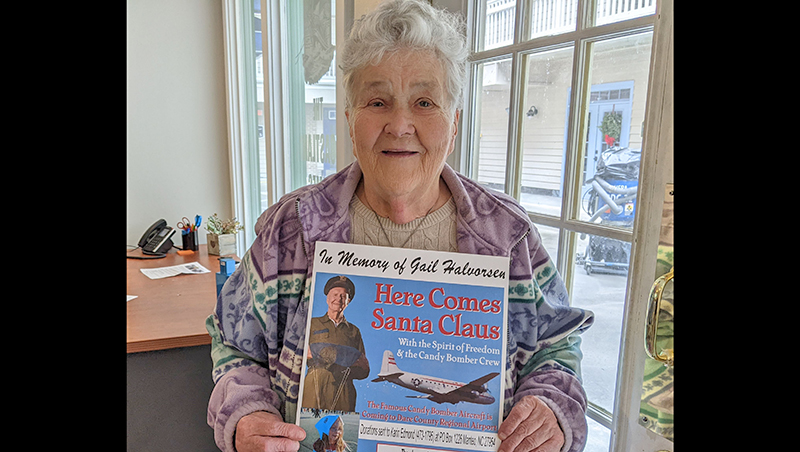 Karin Edmond with the poster for the Spirit of Freedom’s candy drop event in Dare County. Theresa Schneider photo

The well-known Spirit of Freedom “Candy Bomber” aircraft and crew are set to return to Dare County Regional Airport this coming weekend. This year’s flight will be in memory of Col. Gail Halvorson, the namesake of the Candy Bomber aircraft and reenactment.

The plane is set to arrive on December 16 and the crew will appear at the Virginia S. Tillett Community Center in Manteo at 6:30 p.m. for a get-together; the community is invited. There will be a flyover on Saturday, December 17 and the candy drops will occur Sunday, December 18, the first at 12:30 p.m. for younger children and the second at 1 p.m. for older children. The sponsor flight will be after the candy drop and afterwards, the aircraft it will be open to the public.

Information from Edmond follows about the background of the Candy Bomber and her experience as a child in Berlin during World War II:

In memory of Colonel Gail Halvorsen

Hi, my name is Karin Edmond. I was born and raised in Berlin, Germany. At the beginning of World War ll. It was a less-than-lovely time to be a child. When the war came to a standstill in May 1945, the city of Berlin was cut in two parts. One side East Berlin was under Soviet control, and the other side West Berlin was controlled by the allies.

Things changed drastically from this point on.

I remember sitting with my siblings and parents having a very meager dinner. We had quickly finished our meal but were still very hungry. We asked our mother for an extra half slice of bread each. She looked at us, walked over to the cupboard, opened it up to show us it was empty. She said, “we have no more food until we are allowed to get our rations.” We all went to bed hungry, and from then on, most nights my brothers, my sisters, and parents would go to bed hungry. With all the turmoil happening around me, my siblings and I often asked ourselves, “why were we even born?”

The Soviets gave West Berlin only three ways out: by rail, water, and by using the Autobahn. Surrounding all of Berlin was Soviet territory. This was the start of the Cold War.

The West Berliners started right away to rebuild their war-torn city. in May 1948, the Soviets saw how the West Berlin revitalization was coming along very well and they were not happy. The Soviets started making trouble for East Berlin at the checkpoints to purposely make revitalizing almost impossible.

One night, on May 12th, 1948 at midnight, they shut off the power, closed the railroad, the waterways, and the Autobahn. The power plant at the time was in East Berlin. There was a population of almost three million in West Berlin at this time. The Soviets wanted control of the city. We had food for only three days in the entire city. The Soviets wanted to starve us to death. But, thank God for the Americans, British, and French who came to our rescue.

Even after the Allies fought the Germans over three years prior, the Allies decided to fly in food, heating fuel, and whatever could be of use to help the West Germans. Every 90 seconds, one plane landed or took off. At first, they flew in fresh food but it cost too much and was too heavy to transport. To fix this issue, everything that could be was dehydrated: meat, eggs, milk, potatoes, and all other vegetables.

During this time one of my sisters had a birthday. Our aunt had gifted her with a loaf of white bread. All of us were surprised and excited. She looked up at Mama with wondering eyes thinking mama would use it for supper but she looked at my sister and said, “It is yours, you can do what you want with it.” So she looked at all us children and waved us into our bedroom where she broke off pieces so my siblings could have some.

Out of nowhere, a then Lieutenant Gail Halvorsen brought us children some enjoyment by way of two sticks of Wrigley’s Spearmint Gum. This started what is now his famous moniker, the “Candy Bomber.” He saw what joy it brought to the people of West Berlin, so he decided to take some handkerchiefs and the c-rations Hershey chocolate bars and he fashioned them together to make candy-toting parachutes! Each time he flew into Tempelhof airport, he dropped the delightful treats to the children. Before this kind act, most of us children had never had candy. Chocolate and chewing gum were all new to us. Then the other Airmen joined in. It was a candy drop almost every day!

For 23 years the Candy Bomber’s act of kindness has been reenacted here on the Outer Banks. This will be the first year without our hero, Colonel Gail Halvorsen. His journey in this world ended the 16th of Feburary 2022. Minutes before his passing had the blessing of being able to speak to him one last time. Hearing his breath over the phone, I thanked him for all he had done for so many children, for his service and commitment, for his love and kindness. I promised him that even though he may not be around the memory of the Candy Bomber will always live on.

This year as in previous years, I am organizing a reenactment of the candy drop in Manteo. Santa will also be there to greet the young and old alike. We will drop 900 candy-laden parachutes out of the plane. We will have a drop for the little ones, 5 years old and under, from the plane while it is stationary. Then afterwards we will have a second drop for everyone else while the plane flies overhead. This event also commemorates the 74th anniversary of the Berlin Airlift as well as the 24th annual candy drop in Manteo, North Carolina.

We are in great need of assistance in raising funds for this event. All donations are tax-deductible. The tax identification number will be provided upon request. We would be gratefully delighted if you choose to show your support for this wonderful event that brings joy to so many children in our community.

Please get involved this year and allow the Legacy to live on! The candy drop is funded through donations from individuals and businesses entirely. It cost $5,000 alone to fuel the airplane for this event. We take donations of any amount. Sponsors who donate $20 or more to the candy drop will receive a warm hat, hand-crocheted by Karin Edmond.

Sponsors who donate $500 or more will be able to ride in the Spirit of Freedom after the candy drop while having a bird’s eye view over historic Roanoke Island and the rest of the Outer Banks. This opportunity is limited to only 12 people at a time.

If you would like to get involved please make checks payable to: The Berlin Airlift Historical Foundation/Manteo Candy Drop.

Donations should be mailed as soon as possible to:

For more information about donating to this charitable event, please contact Karin Edmond at (252) 473-1795.

Thank you for your kind consideration, in advance.