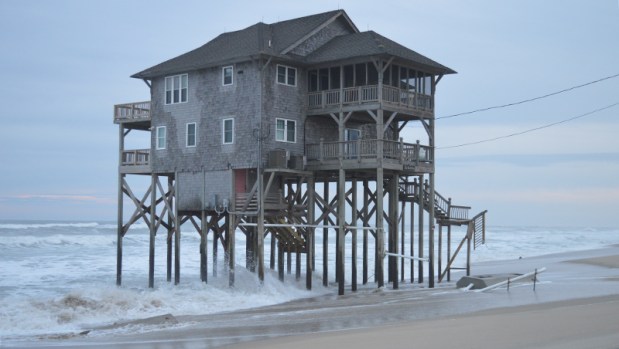 The Black Pearl in north Rodanthe. On Dec. 11, an angry ocean was sending waves under the house. Just past the house, a string of sandbags remains in place by design. The waves pushed sand onto the roadbed and carved out remaining dunes. M.H. Goodloe-Murphy photo 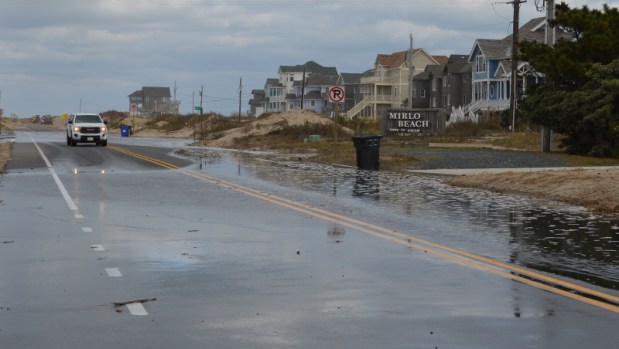 Since Friday, Dec. 9, 2022, high surf has sent Atlantic Ocean water onto the remnant of the former section of NC 12 in north Rodanthe. The road is now called SR 1558. On Dec. 12, ocean water is coming under the houses on Seagull Street and cascading through East Corbina, across the roadway on to West Corbina. The speed limit on SR 1558 is now 25 miles per hour. NCDOT trucks are pushing sand off the roadbed. Eligibility to participate in a Strategic Buyout Program has yet to be determined. M.H. Goodloe-Murphy photo

Dare County commissioners authorized staff to investigate participation in the Strategic Buyout Program from the North Carolina Office of Recovery and Resiliency.

The maximum sale amount is $470,000. The structure value would be determined by an appraiser.

The county is considering about two miles of oceanfront from the boundary line between Rodanthe and Pea Island National Wildlife Refuge through South Shore subdivision and 25 oceanfront houses accessed on Old Lighthouse Road in Buxton.

The properties were chosen based on first line of stable vegetation and/or historical impacts from storms. The Rodanthe map is not finely drawn and is clearly a draft. Staffer Barton Grover said the maps are “not locked in place.”

Once an agreement is finalized and buyout zones established, property owners adjacent to the buyout zone may be added on a case by case basis.

The state’s office of Recovery and Resiliency will cover all costs associated with property purchase and demolition costs.

County manager Robert L. Outten told the commissioners that some details remain to be worked out. He mentioned second homes.

Robert L. Woodard, chairman of the Board of Commissioners, described the program as a “short-term opportunity.”

Wally Overman, vice chairman of the board, indicated that the program would provide time to get money in place for beach nourishment, which is estimated to be four to five years.

In other action, Dare’s commissioners approved a resolution adopting a no wake zone at Oregon Inlet Fishing Center. The National Park Service has adopted the no wake zone after a hearing and after a presentation to the Oregon Inlet Task Force. No opposition was registered.

A hearing was held on the county’s fiscal year 2024 request for transportation funding. For operation grant funds to provide transportation for seniors and individuals with disabilities, the county is requesting $100,000. For administration expenses, the county requests $154,534. For combined capital expenditures, the grant request is for $102,838, which will pay for replacing a wheelchair-equipped van and for annual service for all revenue vans. The grant application states “Applicants should be prepared for the entire local share amount in the event State funding is not available.” The local share, if needed, totals $93,748.

No one spoke at the hearing. The commissioners adopted a resolution authorizing the submission of the grant request for federal and state funding.

Woodard suggested that the county investigate vehicle charging stations as a proactive move. As a result, grants administrator Grover brought a request to the board.

A grant request will be submitted to the Department of Environmental Quality to install publicly available charging stations for electric vehicles on government-owned property. The charging stations are only AC, not fast charged stations. A maximum of $25,000 can be issued per applicant. Grover estimates that cost per parking space and charging station, after a $5,000 rebate from the state agency, at $2,000. Dare County can set a fee for the use of the charging station. The installation is good for five years. Possible station locations are Dare Administration Building, Dare County Youth Center, Fessenden Center and the Frisco Satellite Office. The commissioners voted unanimously to approve the grant submission.

Outten brought a request to the commissioners about building a new Emergency Medical Services station in Kitty Hawk. The town has chosen not to move forward with a new fire station. Instead, Kitty Hawk has proposed to transfer title of land directly north of 4900 N. Croatan Highway to the county for construction of the planned EMS station to include a bay for a town fire engine to be used in storm events.

Oakley Collier has provided a pre-design estimate of $5.7 million for a 7,450 square foot building based on the designed Southern Shores station. The capital improvements plan has $6.5 million slated for the station with an early 2024 construction start. The county manager was directed to move forward if Kitty Hawk approves.

In the consent agenda, the commissioners approved a budget amendment adding $21,214 to the purchase price and related debt proceeds of three front loading refuse trucks. The sum presents price increases between the time the purchase order was issued and the refuse trucks were built. The total price for the three trucks is now $1,006,500.

Under county manager’s business, Outten brought the following maters to the board:

– The baseball fields behind Kitty Hawk Elementary require work on dugouts, press box, bathrooms, erosion on fields. The cost will be $65,000 and will come from contingency.

– Weeks Marine pulled off the Duck beach nourishment project to work in Norfolk. Weeks says it will be back in March. Duck wants to be made whole, so that if sand is lost during the time that Weeks is gone, Weeks must put back sand so that nourishment starts at the point where Weeks stopped. Outten was given authority to sign a contract change with Weeks if Duck approves.

– The commissioners renewed its contract with McGuireWoods Consulting under the same budget and same terms. McGuireWoods consults with Dare County on state government relations.

– The commissioners named Skyler Foley as deputy clerk of the Board of Commissioners.

Woodard raised the issue of opening recreation facilities on the weekend. Outten said the cost – estimated at $75,000 to $115,000 – would depend on which staffers or contractors were used to keep facilities open from 9 a.m. to 5 p.m. on Saturdays and noon to 5 p.m. on Sundays. He told the commissioners funding could probably come from contingency for this budget year, but would be layered in for next year. The commissioners unanimously said, “do it now” and authorized budget amendments to facilitate the new programming.

The State of the County will be presented Wednesday, Jan. 25, 2023 at Captain George’s for a breakfast meeting starting at 8 a.m.

Dare County has a newly-redesigned website. Note the address has changed to darenc.gov.

The commissioners made the following appointments:

The board concluded its meeting with a closed session “to establish, or to instruct the public body’s staff or negotiating agents concerning the position to be taken by or on behalf of the public body in negotiating (i) the price and other material terms of a contract or proposed contract for the acquisition of real property by purchase, option, exchange, or lease; or (ii) the amount of compensation and other material terms of an employment contract or proposed employment contract.”

Outten in requesting the closed session indicated the meeting was to consider the Schiffman property. At the end of the closed session, Outten announced that the board had discussed negotiations and took no action.