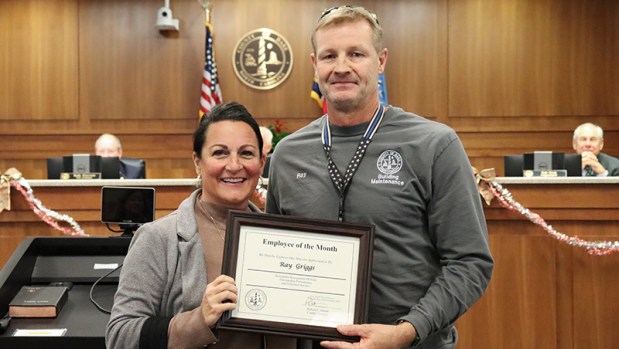 Ray Griggs stands with Shanna Fullmer in front of the Dare County Board of Commissioners. Courtesy Dare County 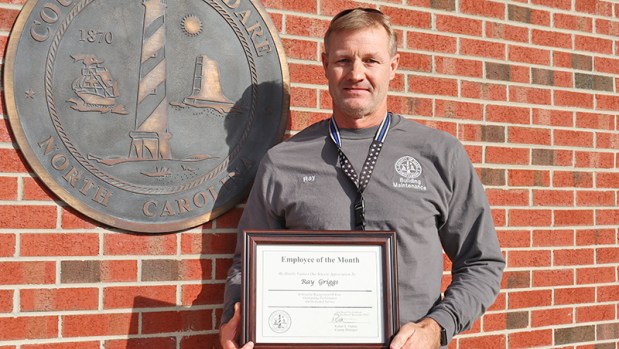 Griggs began working for Dare County on July 7, 2014, when he was hired as a carpenter for the Buildings and Grounds Division of the Dare County Public Works Department. He was then promoted to his current position of lead carpenter on March 11, 2018.

“He started as a carpenter and has since been promoted to lead carpenter, but don’t let that title fool you as to what his job entails,” said Fullmer. “He has taken on the responsibility of becoming a locksmith, and he is in charge of most keying and security for county facilities. If you could see Ray’s key room at the facilities maintenance department, then you’d understand and be able to see how involved and complicated it actually is, so we appreciate that very much.”

Fullmer also commented on the county’s heavy reliance upon Griggs and the unique set of skills he possesses when it comes to working on new county projects, such as the recently-renovated Dare County Department of Health & Human Services building in Manteo and the brand-new College of The Albemarle academic building located on the community college’s Dare County campus, both of which were officially completed earlier this year.

“The facilities maintenance department takes care of all county facilities, and as you all know, that list is growing every year for the number of facilities that we tend to,” said Fullmer. “This allows these employees to encounter different departments and interact with many, many county employees. It was one of these employees in another department that nominated Ray for this award. The words that he used to describe Ray are: ‘always has a smile on his face, gets along with everybody, keeps everybody well-informed when he’s in the building and communicates what he’s doing, and basically is a great example of what a county employee should be.’”

In addition to Fullmer, Griggs has also received a considerable amount of praise for his hard work and dedication to his duties from the colleagues who work very closely with him on a regular basis.

Spencer Gregory, who serves as leisure programs supervisor for the Dare County Parks and Recreation Department’s Roanoke Island/Mainland Division, wrote the following in his nomination form recommending Griggs for the November 2022 Employee of the Month award: “Ray always does a great job when called upon. Ray always has a smile on face and a great attitude with any project he is asked to do. Ray gets along with all the staff and always has a great story to share. His attention to detail is second to none. He communicates with those at the building so everyone knows the status of any project. Ray is an excellent county employee and a great example to all employees.”

Griggs is a two-time winner of Dare County’s Employee of the Month award, having also received the honor in March 2018, when he was working in his former position as carpenter for the Buildings and Grounds Division of the Dare County Public Works Department.

As she concluded her remarks and presented Griggs with his certificate for the November 2022 Dare County Employee of the Month award, Fullmer said, “I tend to agree with all of these attributes used to describe Ray. This is actually the second time in his eight-year tenure that he’s been nominated for [and won] Employee of the Month, and I think that goes to show what his resolve is for continuing to maintain a positive attitude and just being the best employee that he can be. I appreciate everything you do for the county and for our department. Thank you, Ray.”

For more information about the Dare County Public Works Department, go to darenc.gov/departments/public-works.