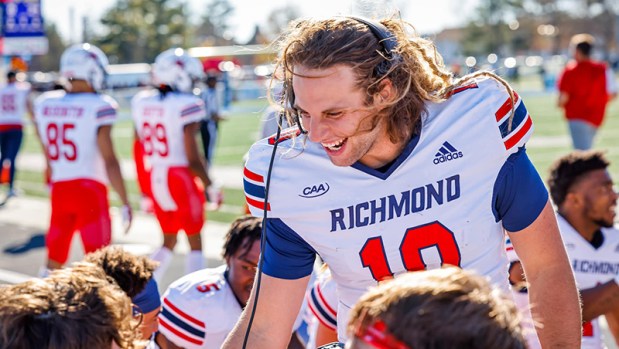 Braxton Hughes visits with “his boys” on the sidelines, flashing an infectious smile. Courtesy University of Richmond Athletics and Spiders Football 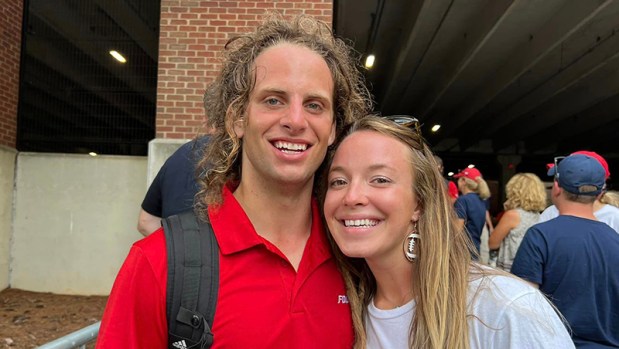 Braxton Hughes and Ellie Gardill are each striving to get their educations complete and begin their careers. Courtesy Ellie Gardill 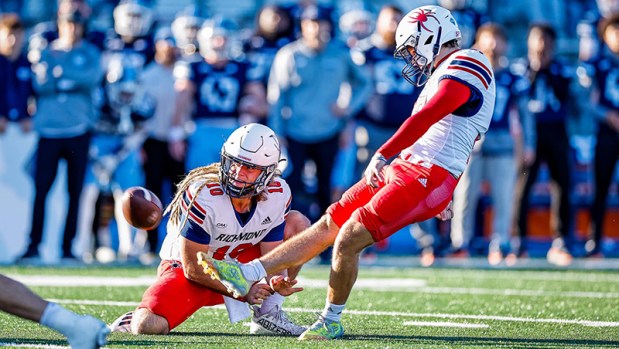 Placeholder Braxton Hughes watches the ball fly for the goal post after an Andrew Lopez kick during the Maine victory this season. Courtesy University of Richmond Athletics and Spiders Football 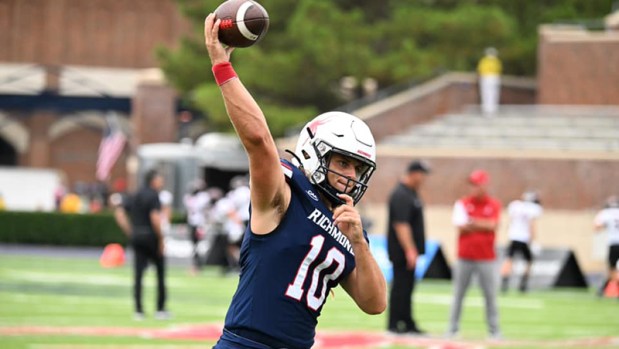 Braxton Hughes loosens up on the sidelines. He signals the offensive coordinator’s play call to the Richmond quarterback in the field in the huddle during games. Courtesy University of Richmond Athletics and Spiders Football 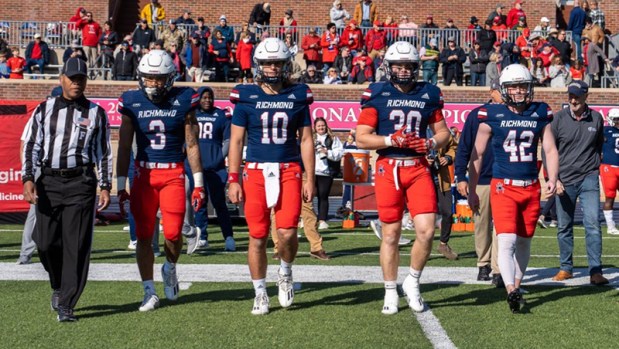 The Spiders coaches named No. 10 Braxton Hughes as one of four captains for an important home game against William and Mary out of Williamsburg, Va. back on Nov. 19. The Capital Cup is known as the “oldest rivalry in the south” and third oldest in Division 1 football. The two team first met back in 1898. Courtesy University of Richmond Athletics and Spiders Football

Braxton Hughes feels blessed. Health, wealth and happiness are all on his side.

By all accounts, Hughes has a big heart and he loves all the guys on his University of Richmond Spiders football team.

Hughes is a back-up quarterback and place holder. Against Sacramento State in the second round of conference playoffs on Saturday, Dec. 3, he had three successful holds for points after touchdowns.

A fourth one for a field goal flew wide during a heavy rain that drenched the game. The Spiders lost to the Hornets 38 to 31. Hughes is back on the Outer Banks for the holidays.

With his long dreadlocks and big smile, he’s great at connecting with people and he forged a solid bond with Nighthawks football coach Jim Prince back in high school.

“Braxton is as sincere of a young man as I’ve ever run into,” the veteran coach said. “And he’s the best quarterback ever at First Flight.”

“He’s just an eclectic guy with so many different interests,” Prince said. “He learned Spanish so he could communicate with a player [on our team], now it’s his major.

“He does rap music and an on-going life video,” the coach noted.

A wiz at remembering stats, Prince listed Hughes’ resume – he was the starting quarterback his sophomore, junior and senior years at First Flight.

“He was outstanding all three years averaging seven wins a season,” coach said. “He had the most passing yards, 1,800, in a season his senior year.”

Like many other athletes across the county, Hughes was awarded two extra years of eligibility due to the COVID pandemic.

And what’s really cool about that, Prince noted, was that the Richmond coach awarded Hughes a scholarship for his fifth year. Before that, he was a walk-on.

In addition, his character earned him the coveted Spiderman Award for the Best Outstanding Character during the SPIDYS Athletic Award Ceremony in April 2022.

Next came the scholarship.

“They put him on a full scholarship, 70K a year,” Prince said. “He’s just about everything you’d want in a young man.”

Another First Flight graduate who think Hughes is a special guy is Ellie Gardill. The couple got together when their college careers began.

She attends East Carolina University and works for Duck Surf Rescue when back home in Southern Shores for summers. She graduated First Flight in 2019.

Gardill has supported Hughes and his passion for playing football for all five years. He graduated a year earlier than him in 2018.

She’s passed on Pirates’ Purple and Gold football even though her dad Greg played there himself so she could take off and drive 175 or so miles for Richmond gridiron Saturdays instead. Her mom, D.A. Gardill also graduated from ECU.

“Honestly, it’s been awesome watching him,” Ellie said. “I go all fall.”

It hasn’t always been easy, she admits. He leaves early during the summer season to get back to Richmond for football practice. They live in different states, go to different schools.

There have been “adjustments” in their relationship, but in the end, Ellie still feels good about it all.

“Watching him succeed has made it all worth it,” she said.

So, when the Spiders kicked off to Sacramento State that Saturday, Dec. 3, Ellie was watching on ESPN Plus. Hughes was pumped and ready.

“It’s going to be great,” he said. “The second round of the playoffs – it’s a blessing.”

Before talking about the game, Hughes shared his excitement about the academic side of school, too.

“I was a walk on,” he said “and they gave me a scholarship for fifth year of grad school, which is huge for me!

For his undergrad, the quarterback and place kick holder majored in Latin American, Latino and Iberian studies with a minor in anthropology and women, gender and sexuality studies, she noted. He’s seeking a teaching degree now.

Hughes has had such a positive impact on his teammates that they all consider him a leader. He’s become a role model for the Spiders recruits and young players.

In fact, the coaches named him as one of four captains for an important home game against William and Mary out of Williamsburg, Va. back on Nov. 19.

“I was named a captain in this year’s Capital Cup which is coined the ‘oldest rivalry in the south’ and third oldest in Division 1 football,” he said. “The first Richmond and William and Mary game was played in 1898.”

“Football is so important to me,” Hughes said heading into the Sacramento State game. “Being here for four years and never making the playoffs has been rough.”

But that all changed when they shut out Davidson 41-0 on Nov. 26 and then traveled to California a week later for the second round of the Colonial Athletic Association playoffs.

Unfortunately, steady rain made for a sloppy game, handing Richmond the 38 to 31 loss to the undefeated Hornets.

The Spiders finished third in the CAA conference with a 6-2 record and went 9-4 overall.

Over the years, Hughes has emerged as a role model due to his dedication and positive vibes.

“Everybody bought in and I’ve been one of the leaders,” he said. “An older guy leading the younger guys.

“We had three losses, two were tough,” he said. “We were working hard all year.

“It’s just been a blessing; we’ve all bought in and its awesome to see how far we’ve gone,” he continued. “The guys all love it … it’s a privilege.”

As for the dreadlocks, they’ve become part of his identity. And yes, he once was tackled by someone pulling on a dread by accident during practice and it ripped out.

“In high school my senior year I had a few locks mixed in with my hair,” he said. “Before my visit to Richmond, I cut those out and my mom, Brande, spent all night combing them out.”

Now they have become something he’s known for.

“The dreadlocked football player – it hangs down to just about his glutes,” Ellie said.

“I’ve always liked it, so I said, ‘when I go to college, that’s what I’m gonna do,’” Braxton said. “I have the longest hair on the team – they all love it.

“I’m almost sitting on it at this point,” he said. “My teammates keep me from wanting to cut it.”

Braxton hasn’t forgot the one time he got one snatched.

From here, it’s hard to say where Braxton will go. He’s sure to finish up his masters and perhaps go into teaching.

The determined young man has one year of eligibility left and he could enter the portal to transfer to a college or university that needs a seasoned quarterback like him, an idea Prince supports and his Braxton’s dad Paul does, too.

Braxton may also develop his music interests and has news on that front as well. He plans to release a new song and video soon. Braxton said his music has changed a lot.

You can find him on You Tube, Spotify and Apple Music.

Just type in his rapper’s name, “Kid Harbour,” a nod to his old stomping grounds in Colington Harbour.