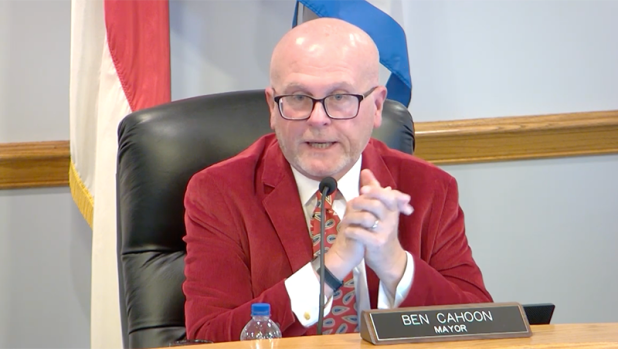 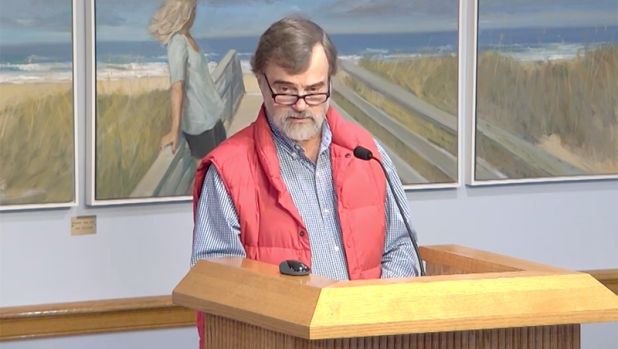 Realtor Bobby Harrell explained the cost of buying a starter home in Nags Head in an effort to encourage commissioners to promote essential and workforce housing in town. Nags Head meeting video still

Accompanying the approval of the bid, commissioners also approved a budget amendment for over $1 million for the project. Town manager Andy Garman said even though it’s a large budget amendment, there was about $800,000 in unused funds from last year’s budget.

Garman then updated the board on his meeting with the Soundside Road working group, which includes residents and town employees. The radar speed limit signs and speed cushions seem to be working to decrease speed in the neighborhood. Garman said the 85th percentile speed is 24 mph, and only slightly higher when the radar signs are off but still recording speeds.

Regarding the sound beach, the group still expressed concerns about the overall volume of traffic that visits the access. “I think the general consensus from the community is they would really like to see a ranger stationed over at the access during the peak season,” Garman said. “Obviously that’s not something we have control over but it’s something that I have passed along to [Jockey’s Ridge State Park] Superintendent Joy Greenwood.”

The board discussed whether to still read submitted letters during public comment. This was allowed during the COVID-19 state of emergency, but since that has expired, town attorney John Leidy said it was up to the discretion of the board. Commissioners were in agreement that, moving forward, submitted letters would be added into the record but not read publicly.

During her monthly report to commissioners, planning director Kelly Wyatt said that Woda Cooper Development Company has submitted an appeal for the unified development ordinance administrator’s interpretation that was issued on October 31. Wyatt said the board of adjustment will hear the appeal on Thursday, January 12.

Residents remained divided during the public comment portion of the meeting about the continuing town issues of the location of essential and workforce housing and the location of a proposed museum dedicated to the accomplishments of Francis Rogallo.

Regarding the proposed Woda Cooper housing development at E. Hollowell St., Nags Head resident Basil Belsches said, “…No kind of high-density project is suitable in the historic character area between Danube and Hollowell streets. A three-building, 54-unit apartment complex does not meet or fit in with the look and feel of the designated historic character area where the 4.7-acre lot is located. It doesn’t matter if the complex is affordable housing apartments or luxury counter luxury condos – they just don’t fit.”

Donna Creef, government affairs director for the Outer Banks Association of Realtors, said that with the finite amount of privately-owned land in Dare County, the need to incorporate mixed housing in Nags Head neighborhoods was essential: “If zoning regulations are amended to limit multi-family structures in your historic character area of Nags Head, we hope the town will also offset that option by adopting regulations to encourage year-round housing development elsewhere in the town.”

Creef cited policy from the Nags Head comprehensive plan that states the need to promote and expand the types of housing and accommodations for varying income levels, aging populations and the seasonal workforce within the town.

Realtor Bobby Harrell, of Harrell & Associates, made the mathematical point to commissioners that young people starting out in the workforce can likely not afford to live in Nags Head. He estimated typical land and development prices for a 1300 sq. foot starter home would cost about $470,000, equaling payments of about $3100, plus more for taxes and insurance.

“I think Dare County does an excellent job educating our students and preparing them for college. Most of us would agree that when our children go off to college we hope they come back to our community, and serve and work in our community. If you have ever been to these school board ceremonies, you’ll see literally hundreds of thousands of dollars of scholarships awarded to the students – very deserving. But for those students to come back here, it’s almost impossible for them to afford to come here particularly when looking at housing,” Harrell said.

Regarding the Rogallo Foundation, Susie Walters said, “Of course while it is unlikely that the damage to the Rogallo Foundation is reparable, I ask that you please rescind your letter [to State Parks and Recreation Deputy Director Brian Strong] which included some inaccurate information … Truth, facts, and integrity have always been the hallmarks of the Town of Nags Head and I hope you will consider rescinding the letter.”

Billy Mosely, a member of Friends of Jockey’s Ridge, said, “I wish to reiterate that the Friends of Jockey’s Ridge has issued a resolution, and that the North Carolina State Parks director Dwayne Patterson has expressed, that Jockey’s Ridge State Park is not a suitable location for the Rogallo Museum. This is simply an effort to prevent development within the park. This is in no way an attack on the Rogallo Museum or Mr. Harris or anybody involved in this effort. I am hopeful that with this statement The Town of Nags Head and the Rogallo Foundation will support and respect these decisions now and for the future.”

Commissioners were scheduled to discuss the topic at the meeting. However, due to commissioner Kevin Brinkley’s absence, Mayor Ben Cahoon requested that the agenda item be pushed to the December 21 meeting to allow for unanimous action.