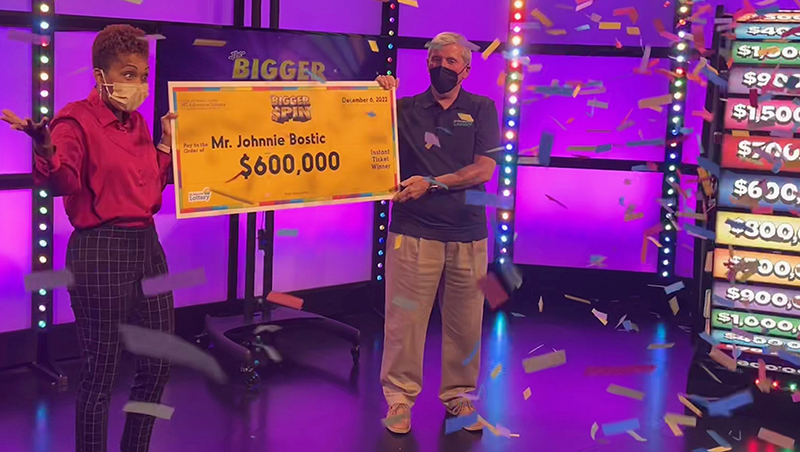 The North Carolina Education Lottery has reported a huge win by a Cleveland County man in the recent Bigger $pin Live Event.

Johnnie Bostic, a 75-year-old housekeeper from Polkville, had a chance to spin a giant prize wheel Tuesday, December 6, 2022 at the Bigger $pin Live Event and he watched in excitement as the wheel landed on a $600,000 prize.

“It’s a game changer for me,” Bostic said. “I didn’t even care what I hit. I was just happy to win anything.”

Bostic’s first stroke of luck came when he entered his $10 Bigger $pin scratch-off into a second-chance drawing and won the chance to spin the prize wheel at the live event.

“I just always felt like I would win one day,” Bostic said.

As Bostic stepped up to the big wheel to spin, colored lights flashed all around him and the crowd watching cheered him on in anticipation. When the wheel finally stopped at $600,000, he beamed as he received his big check. After required state and federal tax withholdings, he took home $426,060.

“I’m just happy to know my funds will be secured from now on,” he said.

Bostic said he plans to use his winnings to renovate his home and take a cruise to the Bahamas.

“I never thought the time would come where I could actually go,” Bostic said. “I feel like I deserve it after 75 years.”

Bostic worked as a manager at PPG Industries for 41 years before retiring in 2007. He went back to work as a housekeeper at Gardner-Webb University because he has “a passion for work.”

Bostic became the last person to get a chance to spin the prize wheel. In the first four Bigger $pin events, five players won prizes ranging from $400,000 to $2 million.

For details on impacts made from lottery funds, visit www.nclottery.com and click on the “Impact” section.