New members and new leadership for Dare County school board 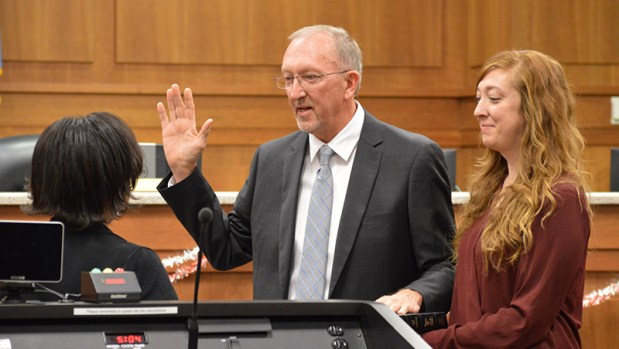 Ron Payne was sworn in as a member of the Dare County Board of Education on December 12, 2022. Courtesy Dare County Schools 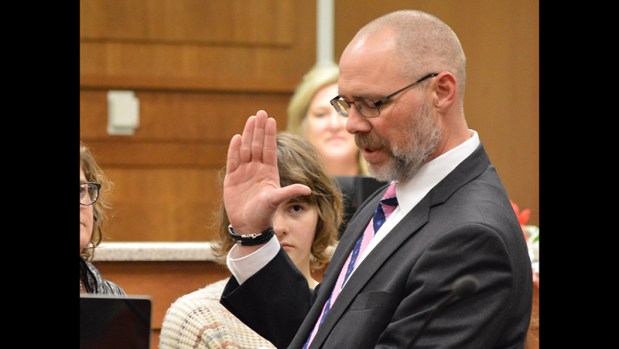 Matt Brauer was sworn in as a member of the Dare County Board of Education on December 12, 2022. Courtesy Dare County Schools 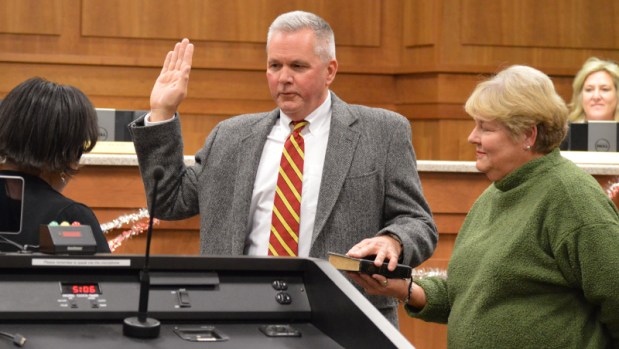 Barry Wickre was sworn in as a member of the Dare County Board of Education on December 12, 2022. Courtesy Dare County Schools

Three new members of the Dare County Board of Education were sworn in Monday, Dec. 12, 2022 and immediately took control of the board.

Basnight called for the election of board chairman.

The newly-elected chairman conducted the election of vice chairman. Twiddy was nominated as vice chairman, as was Wickre. Wickre was elected by the same 4-3 split.

After the elections, Payne said “it’s an exciting time for Dare County public schools.” He said, “the tide has changed. We have three new board members.”

He said the school system has a “great team in the central office.”

Paul Carson with Anderson, Smith and Wike PLLC delivered the audit report to the board.

He presented the firm’s opinion that the audit was clean and unmodified. In the compliance report, Carson again said the three reports were clean, unmodified. He had no difficulties or disagreements with staff.

He stated that Dare County Schools was in good financial condition, well managed and transparent.

Carson said, the balance sheet of all government funds closed at June 30, 2022 with a balance of $5,071,888. Carson said it is important to have cash funds and that rising costs will weigh heavily.

However, the over $5 million is not the true cash balance. A total of $3,563,223 is assigned for subsequent year expenditures, commitments that can be carried forward and additional set aside funding for increased utility costs.

When additional state-required deductions are made, at June 30, 2022, the Dare County Schools had $952,330 in cash, which is under the Dare County Board of Commissioners policy limit of $1 million for fund balance.

Food Service finished with $479,220, about $31,000 less than last year. Carson said Food Service “appears to be in a good financial position.”

The board accepted the audit as presented.

Twiddy thanked Anna McGinnis, who returned as interim finance director after her retirement to help Dare County Schools after the previous director resigned.

The board approved additional capital outlay in the amount of $9,000 to replace the sound system in the Manteo Middle School gymnasium.

In updates, Basnight told the board that 57% of Elementary and Secondary School Emergency Relief (ESSER) funding had been spent on 20 salaries and ESSER funding for the next two years is pegged to support those salaries. ESSER funding in Dare County was planned to fund interventionists and literacy and math specialists.

School board attorney Rachel Hitch delivered a report on home-schooled student participation in athletics. She said consultation with school administrators was completed and that a draft policy should be ready by January 2023.

The Aviation Project at First Flight High School received a go-ahead from the National Park Service to build an airplane in a structure on Wright Brothers National Memorial grounds.

Over two years, 24 seniors and juniors will build a single prop, two-seater, low wing plane from Van’s Aircraft kit RV-12iS. All metal parts come pre-cut. Once the plane is built and Federal Aviation Administration tested and approved, all students who worked on the plane will take a ride.

Depending on the schedule, First Flight students in the program will either take a three-hour course every other day or a 90-minute class every day. The curriculum, which costs $15,000, comes from Tango Flight, an educational, non-profit organization working to develop engineers, pilots, aviation mechanics and technicians. Students apply classroom lessons to build an airplane.

A new policy 7360/8225 is titled Crowdfunding with forms for project approval and parent consent form for crowdfunding. Hitch said the new policy was to bring about uniformity online and establish parameters.

In the consent agenda, the board approved a grant from the Hatteras Island Youth Education Fund for Cape Hatteras Secondary School. The $5,500 grant will purchase microphones, monitors and additional lighting for theater upgrades.

The board also approved the Amended Government and Education Access Channels Interlocal Shared Use Agreement.

Under a new policy, the personnel list is not included in the agenda packet distributed in advance of the regularly scheduled meetings. Once approved by the board, the personnel list is available. On the Dec. 12, 2022 list were five resignations, one termination, three leaves of absence, five internal transfers, eight new hires, 13 new substitutes, one bus monitor and 72 coaches for the winter sports season.

After a closed session, the board attorney Hitch announced that the board had granted a waiver to Green Power and authorized the superintendent to sign an agreement. The company works to place LED lighting in all schools.