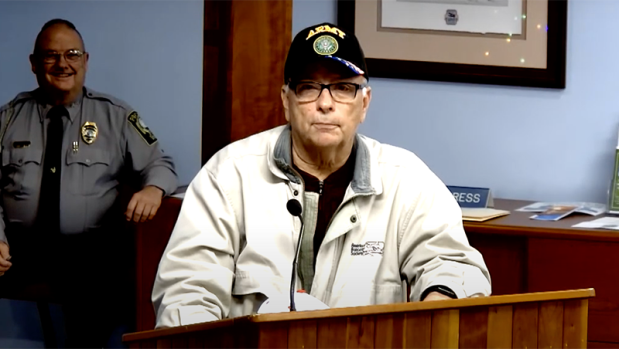 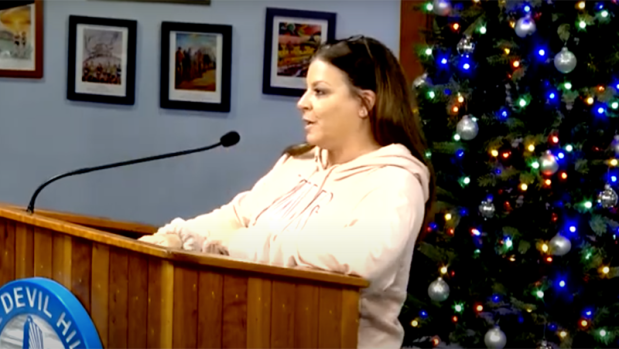 Kill Devil Hills commissioners discussed the possibility of lowering the speed on west side neighborhoods from 25 mph to 20, but ultimately voted to keep the speed the same and invest in speed radar display signs.

The board heard from two residents who expressed support in lowering the speed limit. “It’s not even safe to send my child out to get the mail from the mailbox,” said Marie Ruggiero, who lives on West Martin Street and said people are regularly clocked in the 40s, 50s or higher.

Resident Laura Swisher was also in support of a speed reduction, saying that she regularly encounters cars at high speeds on when she walks her dogs throughout the day.

Pete Burkhimer spoke as both town engineer and as a resident of Kill Devil Hills. In his official capacity, he agreed that the town could do a speed study and adjust the speed if the science indicated a change is needed.

On a more personal level, with kindness and clarity Burkhimer shared his opinion that it’s really those far exceeding the speed limit that are the problem. Going 25 mph may perhaps be an appropriate speed for those roads, but lowering it to 20 in an effort to bring down the speed of people going 40 or 50 mph may not be the most effective solution, and in effect may be a drudgery for law-abiding citizens.

“Even 40 miles an hour in a 25, much less 50 or 64 is incorrigible, and nothing we do in a civilized proceeding like this is going to help us with that. Reckless driving enforcement is all you can do for somebody like that,” Burkhimer said.

Commissioner Terry Gray was fully supportive of a reduced speed for west side neighborhoods. “Is it going to deter it all? Probably not, but it might cause people to lower [their speed]. I support it a hundred percent. We’ve got to do something to try to slow people down because they’re just going too fast,” he said.

Mayor Ben Sproul said he was unconvinced based on the surface research he’d conducted that reducing the speed limit to 20 was going to achieve the results the town was looking for. “We have dangerous drivers – some number of them – and we’re trying to figure out how we change that behavior. And you know, I’m not fully convinced that changing the speed limit accomplishes that. It doesn’t have a good track record that I could find online quickly,” he said.

The board discussed other options such as speed bumps (which nobody liked), additional stop signs (which are not allowable as a speed reduction use) and radar speed display signs. Solar-powered radar stationary speed signs run about $5300 each.

All commissioners agreed that speeding is a problem in town, but the board was unusually divided in the final vote.

Commissioner Gray made a motion to approve the speed reduction to 20 mph and it was seconded by commissioner John Windley. However, the remaining three votes – from Mayor Sproul, Mayor Pro Tem Ivy Ingram and commissioner BJ McAvoy – were no. The motion did not carry.

Following the vote, the mayor directed town staff to research the purchase of speed radar display signs in bulk.