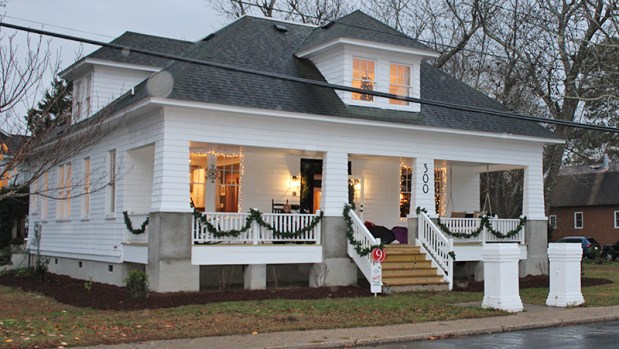 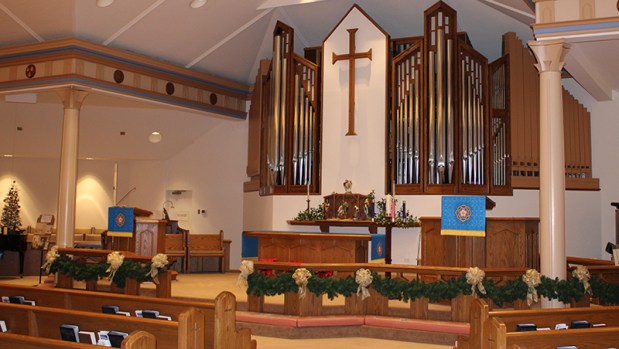 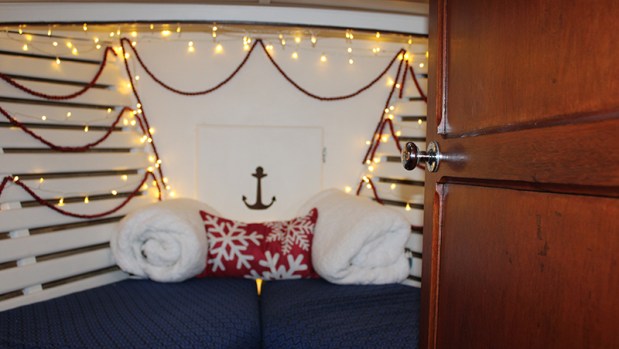 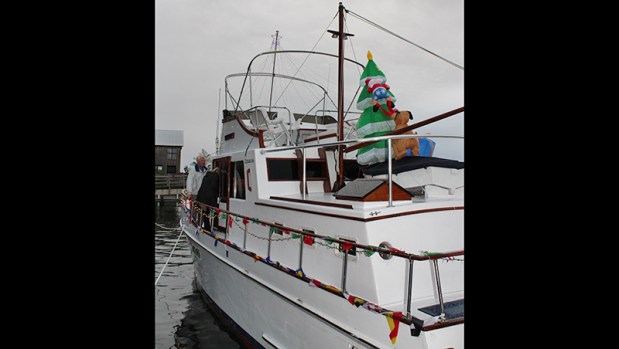 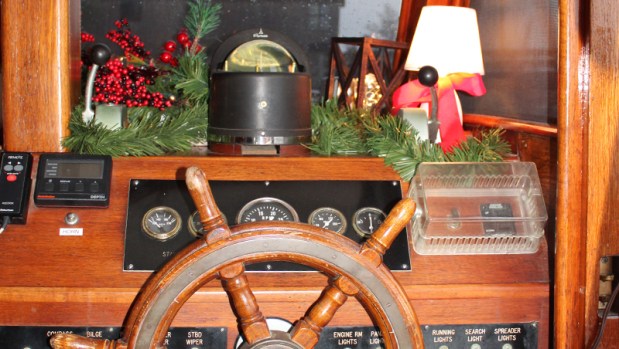 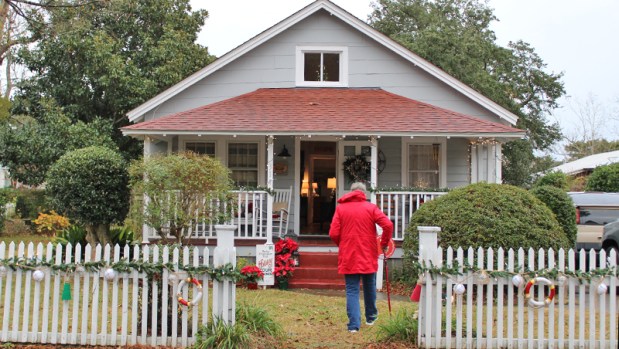 The Jenkins McDowell Cottage was all dolled up for the 2022 Holiday Tour of Homes. Tour participants brought raincoats and umbrellas for the light afternoon sprinkling. Summer Stevens photo 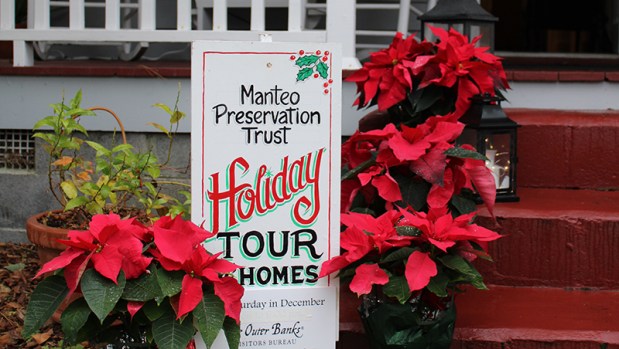 The tour was from 1 to 6 p.m. Saturday, December 3. This was the first tour since 2018. Summer Stevens photo 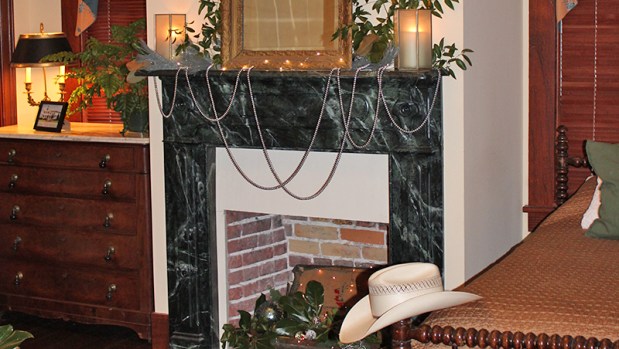 The Basnight Evans House on Sir Walter Raleigh was all aglow for the 15th Holiday Tour of Homes. Summer Stevens photo 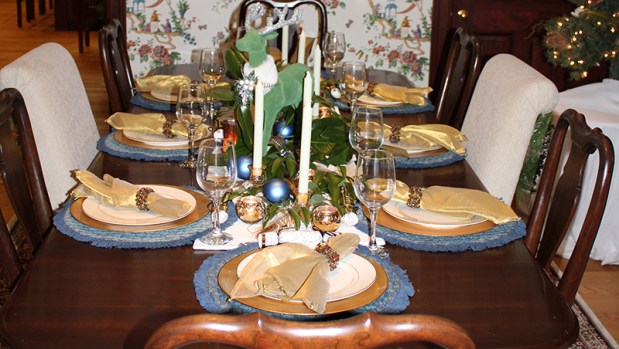 The dining room is all ready for Christmas dinner at the Basnight Evans House. Summer Stevens photo 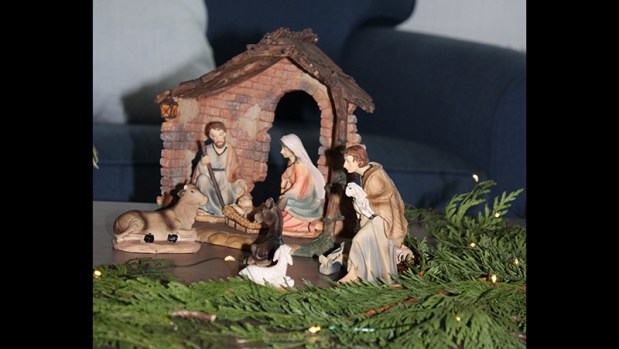 One of the many nativity scenes at the Hoffer House on Dartmoor Avenue. Summer Stevens photo

The Manteo Preservation Trust held the 15th Holiday Tour of Homes on Saturday, December 3, highlighting multiple homes, a church and a yacht.

The tour began at Outer Banks Distilling on Budleigh Street, where visitors could purchase tickets, pick up a map and begin the festivities at the historic S.W. Twiford Building. Over 500 people participated in the tour this year, which hasn’t been offered since 2018.

Manteo Cyclery provided bicycles for those who wished to tour on two wheels, though most people brought rain boots and umbrellas and enjoyed traveling on foot. The afternoon weather may have been gray, but the mood was merry and bright.

The second stop was the Hoffer House on Dartmoor Avenue, owned by Don and Karen Hoffer. The most modern home on the tour, this lovely two-story construction in the Marshes Light community featured an elegant kitchen and an impressive collection of nativity scenes. “I collect them from everywhere we’ve traveled,” Karen Hoffer said. Between her husband’s time in the Navy and her children’s mission trips, the Hoffers have a variety of nativities from Peru, Italy, Ireland, Ecuador and Norway.

The third stop was the Jenkins McDowell Cottage, located at 314 Agona Street. This historic cottage was built in 1900 and remodeled in the 1990s by Terry McDowell. Her daughter Sydney Jenkins inherited the house after her mother’s death last year and now rents it to visitors seeking a getaway in the heart of Manteo. The quaint cottage was bursting with Christmas cheer from floor to ceiling, including the ledges of the living room’s vaulted ceiling.

A short stroll down the road led one to the Borland House, or affectionately referred to as “Dot’s Cottage” after the original owner’s wife, Dorothy Stetson. The home was a private residence until last year, when it transitioned to a rental through Roanoke Island Inn.

The Starry Banner Yacht, moored at Shallowbag Bay downtown, was the next stop on the tour. Festive and nautical bundled together, the boat creatively utilized the small space, such as placing greenery and a nativity scene in the cubby holes and hanging lights from the mast.

Heading north a couple of blocks to Devon Street, the tour continued at The Croaker House, so named after the original owner had a particularly good catch of croaker fish. The 1945 Cape Cod-style house was charmingly decorated to reflect the warmth and joy of Christmas.

Stop number seven was Admiral’s Quarters Inn and Cottage at 504 Wingina Avenue, built in 1899. The home is believed to have been owned by the Midgett family for over a hundred years. In 2002, new owners began restoration while maintaining the historic character. This unique home is divided into two residences – the larger, main portion of the home is rented, while the smaller but no less charming apartment is reserved for the owners. Both sides of the home were open and decorated with local greens from magnolia trees, as well as pine cones, apples, oranges and pineapples.

Continuing on to Budleigh Street, visitors stopped in at the perfectly cozy and remodeled Forslund House. The property holds a rich history, as home to the Roanoke Island Academy built in 1894. The Creef family built a 10-room house on the site in 1919. The Town of Manteo purchased the home in 1983 and used it as the Town Hall for five years until it was purchased by private owners and converted it into a bed and breakfast. The owners’ daughter Hannah and her husband Philip purchased the home and once again lovingly restored it into a single family home that they enjoy with their two daughters. The home combines modern farmhouse style that seems like it was made for Christmastime and adds elegant features like an oversized kitchen island and gorgeous master suite. The original hardwood floors and stairway banister retain the charm of the early 1900s charmer.

The show-stopper of the tour was the Basnight Evans House at 210 Sir Walter Raleigh, recently purchased by Manteo native Michael Basnight. Both the original portion of the house and the addition added in the 1990s were decorated with such nostalgic appeal that it made visitors wish it could be Christmas all year round. Using fresh greenery, holly berries, candles and traditional reds, greens and golds, the home sparkled with holiday warmth.

A short walk up the street took the visitor to the eleventh home on the tour, The Fenninger-Allendorf House, a lovely home on the Manteo Preservation Trust list of historic structures. Built in 1900 or earlier, the home retained its original features but added modern conveniences. Holiday cheer abounded in the downtown Manteo home.

The final stop in the 15th Holiday Tour of Homes was the delightful Mee House. It was so perfectly constructed to blend in with Manteo style that one would be surprised know it was built in 2000. The home is full of custom built-ins including shelves and kitchen cabinetry, made only more beautiful by the Christmas décor tastefully adorning each room.

Holiday Tour of Homes co-chairs Bill Husted and Jeanne deCamps said that all the visitors they talked with “had a wonderful time.”

“We laughed a little bit because some people were gushing that they loved the tour so much they want to move to Manteo,” Husted said.

The mission of the Manteo Preservation Trust is to preserve the historical, cultural and architectural heritage of the town, so “showing homes – some of them older homes – is a great way to fulfill the mission of the Trust,” deCamps said.

The tour is the major fundraiser of the year. Money collected is used for projects around town, for example, participating in the restoration of the belfry at the Historic Courthouse/Dare County Arts Council building. Beyond ticket sales, money was raised through memberships for the Trust and raffle tickets. Dozens of local businesses in Manteo and throughout the Outer Banks donated items to the raffle baskets including jewelry, restaurant gift cards, massages and a fishing trip.

“People were really, really generous,” she added. “I don’t know why I’m always surprised, but the generosity of people and businesses in Manteo and on the beach, it’s a wonderful thing.”