Memories and Musings: The old tree lights, a fable 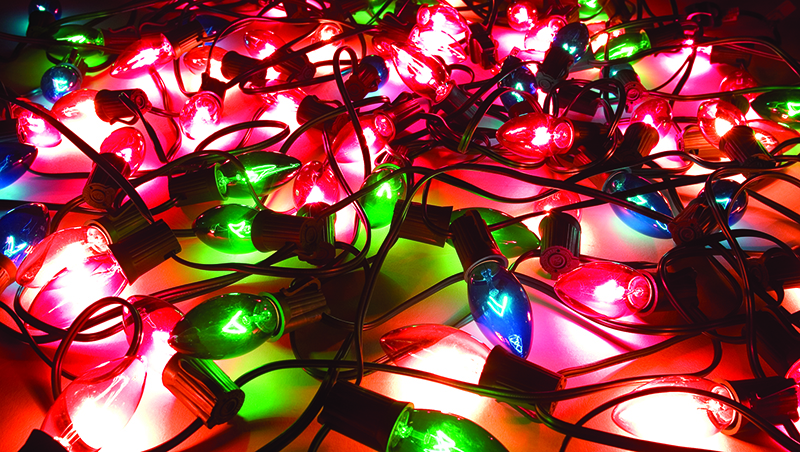 Vincent seemed to be in everyone’s way as his family worked around him trying to decorate the Christmas tree.

“Get out of the way, Vinnie!” barked his nineteen-year-old brother, Tony, who was home on leave from boot camp after enlisting in the Army during the early days of the Korean War. Tony was a graduate of his hometown high school where he lettered in basketball and baseball and was vice president of his senior class. Tony was Vinnie’s hero and after hearing his brother’s harsh reprimand he began to cry.

“Go up in the attic, Tony,” said their father, “and bring down that tiny fake tree from his school play for him to decorate.” After hanging one of his favorite ornaments toward the top of their Christmas tree, he added, “And … get that old windup train for him to fuss with and put around that old tree.”

Looking a bit confused their mother said, “That old, threadbare tree? And, that train hasn’t worked since Tony overwound it and broke the spring.”

Vinnie was listening intently to the back-and-forth conversation and getting more excited about the tree and train by the minute.

Tony headed for the stairs, feeling a little guilty for not inviting his little brother to accompany him, but knowing Vinnie would ask questions about everything in the attic.

While Tony fumbled around in the attic, his dad continued hanging ornaments on the tree situated in the bay window of the front room where, when lighted, could be viewed from the street.

“Daddy,” said Vinny, “why does that striped red ornament have a silver paper hanger, when the others are metal?”

Vinnie’s mom answered, “We bought that ornament during the Second World War when metal was very scarce and was saved for use in the War. It’s very special to us, especially now that your brother is soon going on active duty.” Young as he was, Vinnie sensed an unmistakable sadness in his mother’s voice.

“Look what I found!” said Tony as he hurriedly came down from the attic with the old tree and train and a string of very old and big Christmas tree lights dangled around his neck. “The lights don’t work but they’ll look pretty on Vinnie’s special tree.”

Everyone was smiling as they watched Vinnie dash with his newfound treasures to the area his dad had given him near the big tree.

“If you need help, let me know,” said Tony, “but you have to make the ornaments by yourself. So, just be careful with the scissors, glitter, and glue.” (Not five minutes later, Tony was on the floor with Vinnie, surrounded by glitter and glue and laughter.)

By the end of the day the final ritual was complete – the slow and meticulous placing of fake silver icicles, one-by-one, on the family tree – followed by everyone plopping exhausted on the sofa, or in Vinnie’s case, cross-legged on the floor.

When it was dark enough outside, Tony had the honor of plugging in the two-pronged cord to the tree lights while everyone else prayed they all would work. Thankfully, they did.

In the days following the tree episodes, with Christmas only weeks away, the mood in the house grew somber as the family prepared to say goodbye to Tony when he left for active duty.

On a bitter-cold December morning, the train platform held three waving, crying figures – resembling a Norman Rockwell painting – in motion as mom, dad and little brother watched the puffing train grow smaller and smaller until it disappeared on the cold horizon.

When Christmas Eve arrived and the family had finished a large, traditional dinner, there came a knock at the front door. Dad thought it might be his mother with a large tray of Christmas cookies. Mom wondered if it was her sister returning the roasting pan she had borrowed. Vinnie hoped it was a neighborhood friend wanting him to go out and play in the snow.

Dad answered the door and was surprised to see a Western Union employee with a telegram in his extended hand. His heart sank as he read the telegram from the Department of the Army notifying the family that Tony had been deployed and was missing in action.

That night, Vinnie was tucked into bed by his mom and dad and reassured that Santa would be coming and that the cookies had been left out for Old Saint Nick to enjoy and share with his reindeer.

Mom and dad then went downstairs and in each other’s arms sat on the sofa cried for long minutes. Soon after, they smiled and lovingly put all Vinnie’s Santa gifts, with a few from mom and dad, under the Christmas tree.

It was just after midnight on Christmas morning when a high-pitched, whirring sound downstairs awoke Vinnie. He immediately believed it was Santa delivering his toys. He sneaked down the stairs to have a look, hoping to catch Santa in the act. Instead, Vinnie found the room alive with lights and sound.

By now, Vinnie’s mom and dad, having heard the racket, came down the stairs and joined Vinnie in the living room. What they beheld caused them to pause and stare in awe.

There in Vinnie’s space, his old, paper-chained tree was brightly flashing the old lights Tony had brought down from the attic. Miraculously, the whirring sound was coming from the broken train that was circling the tree on golden tracks and rhythmically puffing plumes of gray smoke.

At that moment nothing mattered to Vinnie and his mom and dad except the magic of a brother’s love that had transcended time and space.

Brothers, too, are the Magi.

Gene Gallelli was associate superintendent of the Dare County Schools for eight years. He received his doctor of education degree from East Carolina University, where he taught and supervised students studying to become school administrators.