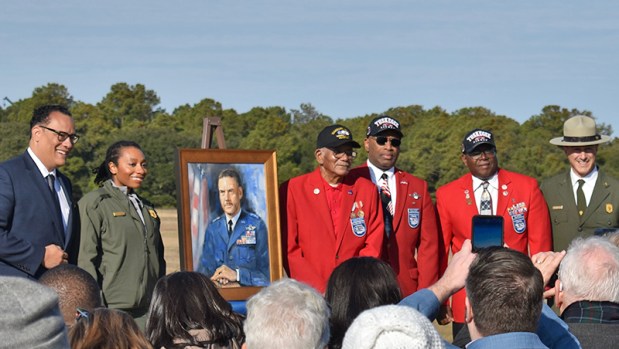 Doug Melville is joined by Maria Tinker, David Hallac and members of the Tuskegee Airmen for a photo with the portrait General Benjamin O. Davis Jr. that has a new home in the Wright Brothers National Memorial Museum. Danielle Puleo photo 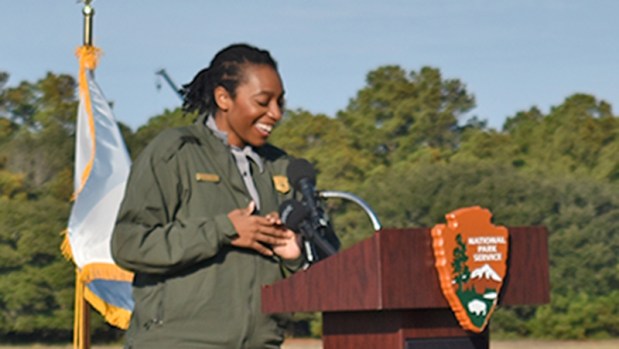 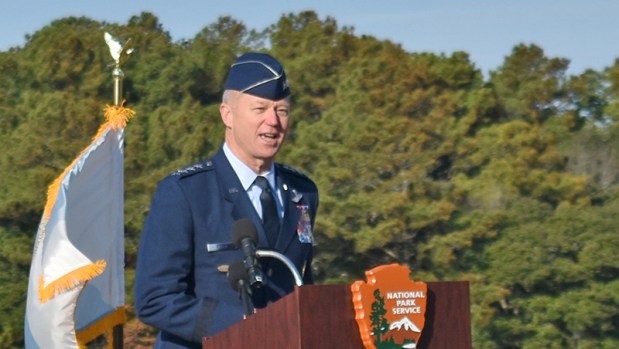 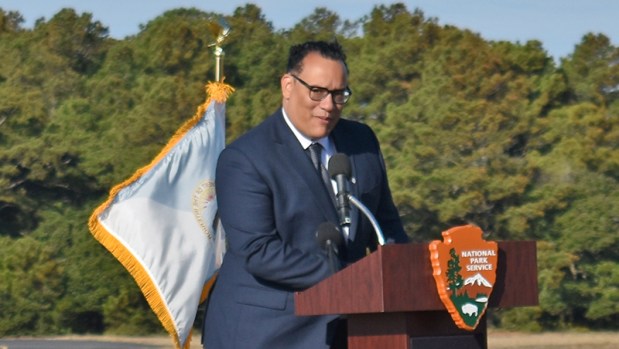 Each year, Wilbur and Orville Wright are recognized at Wright Brothers National Memorial for achieving one of the first flights with a powered, sustained and controlled airplane back in 1903. While commemorating the achievements of the Wright Brothers, an aviation honoree is also named.

“Every year we have a celebration of the legacy of the Wright Brothers and we honor somebody who embodies that legacy of pushing the field of aviation forward,” explained Elizabeth Hudick, north district interpreter and supervisory park ranger. This year’s Paul E. Garber First Flight Shrine inductee was the first black general in the air force. General Benjamin O. Davis Jr. was the commander of the Tuskegee Airmen and a veteran of WWII, the Korean War and the Vietnam War. “He served more than 35 years in the Air Force and left an incredible legacy behind,” Hudick shared.

Karen Wilson, chief of civic outreach and community engagement for Air Combat Command, expressed her excitement for the opportunity to highlight the 75th anniversary of the US Airforce while commemorating a hero such as General Davis. “This is something that we look forward to doing the entire year,” she smiled. “We have a lot of accomplishments that have happened over the past 75 years, and one of the heroes of our aviation story, and actually one of the heroes of history, is General Davis. So, to be able to come here and participate in this program that is inducting him on this historic day of the 119th anniversary of the first flight is the reason we got up to get over to witness this.”

As the crowd gathered outside of the museum for the morning ceremony, the First Flight High School band serenaded guests. The program opened with a presentation of colors by Camden County High School Coast Guard JROTC and Pastor Marc O’Neal of Mt. Olivet United Methodist Church gave the invocation.

There to give the welcoming remarks were both David Hallac, superintendent of National Parks of Eastern North Carolina, and Michael Fonseca, president of the First Flight Society, Inc. Hallac touched on the preservation and impact of such a special national park like the Wright Brothers, while Fonseca paid homage to the First Flight Society, from its inception 95 years ago to the growth it has witnessed leading up to present day. Hallac eagerly announced a new partnership in the works between the park service and Dare County Schools, where a high school class will have the opportunity to build a real, powered, FAA certified airplane right on the grounds of the memorial. Once completed, the plane will make its first flight on location.

The event continued with words from Maria Tinker, supervisory park ranger at Tuskegee Airmen National Historic Site, honoring the legacy of honoree General Davis. “One of my favorite quotes comes from General Davis himself when he said, or rather wrote in his autobiography, ‘The privilege of being an American belongs to those brave enough to fight for them.’ I love this quote because for me it is very powerful in its simplicity and sums up the legacy of General Davis Jr. – a legacy of resiliency and determination.”

Captain Paul Carr, a pilot with Delta Airlines, told the story of the Wright Brothers from Wilbur’s perspective, captivating the audience with the details of a life many have heard very little of. Following Carr was the keynote speaker of the day, General Mark D. Kelly, commander of USAF Air Combat Command. “General Kelly is the featured speaker and we’re just thrilled to be a part of this,” spoke Wilson of Kelly. “It really is meaningful to him, especially as a pilot coming up through the ranks.”

“Just as the Wright Brothers tested here in the Outer Banks with over one thousand test flights and a glider before that famous first flight, imagine what the Wright Brothers would say if they saw the technology and accomplishments of our airman today,” Kelly said as he took to the podium. He spoke on the Air Force and its ability to adapt and modernize over the past 75 years, while noting that its anniversary theme – “innovate, accelerate, thrive, your Air Force at 75” – was the theme General Davis epitomized throughout his life. “No one embodied the idea of striving and the warrior spirit of our air force, whether past or present, more so than our honoree today.”

Kelly shared many “firsts” of General Davis: He was the first black cadet to graduate from the United States Military Academy at West Point in 1936 since 1889. Captain Davis was assigned to the first aviation cadet training class at Tuskegee Army Airfield when the Roosevelt administration ordered the War Department to create a black flying unit. He was the first black pilot to solo a U.S. army aircraft. The four-time recipient of a General’s Star and his father, General Benjamin O. Davis Sr., were the first two black generals to serve with the United States military. Kelly noted: “Davis permanently changed the nature of our military, our Air Force and our nation.”

Doug Melville, great-nephew of the 2022 First Flight Shrine inductee, finished out the morning’s event with a personal tribute to General Davis: “Ben was always a loving centerpiece of our family.” Melville shared how his great-uncle had bought him his first car, taught him how to golf and gifted him a blank check upon graduating high school, to be used for a university of his choosing. “He changed my trajectory.”

Melville spoke of his great uncle’s humility, always operating under the radar, as though he was invisible. “Ben and his dad lived their lives as though they were invisible,” he said, remarking on how the two had to keep a low-profile due to the nature of the “race conversation, and the conflict and the double victory.” He added, “… to not cause problems, but to use the system to diffuse the system and work quietly and operate as if he was invisible, just so he could help make the change that we all wanted to see.”

In an effort to make their stories heard, Melville changed his career to become a diversity officer, to ensure corporations would help to make the “invisible” people visible. Melville unveiled the portrait of General Davis after he remarks and invited members of the Tuskegee Airmen up to join in the photos.