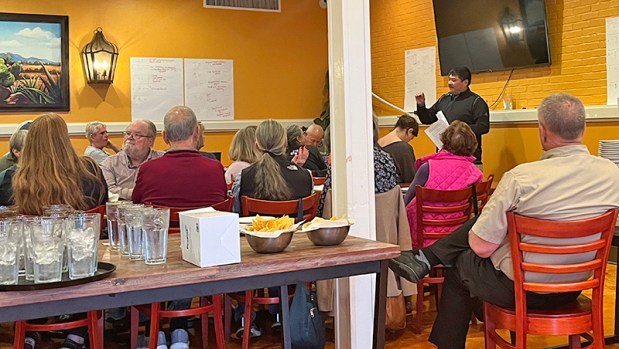 Major Jason Hughes with the Salvation Army and Chuck Roe with Arthur, Alley & Associates spoke to a group of about 40 representatives from various nonprofit organizations in Dare County. Danielle Puleo photo 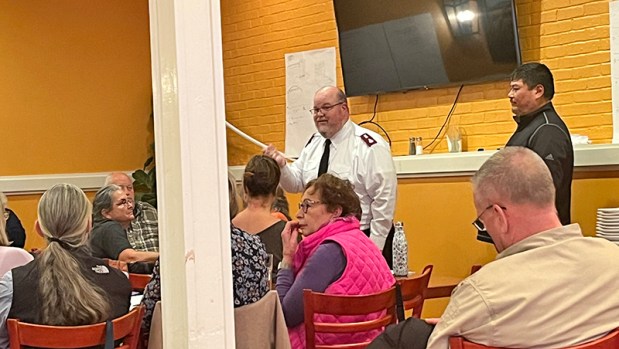 Major Jason Hughes with the Salvation Army and Chuck Roe with Arthur, Alley & Associates spoke to a group of about 40 representatives from various nonprofit organizations in Dare County. Danielle Puleo photo

A group of about 40 representatives from various nonprofit organizations in Dare County came together on Thursday, December 8 to meet with Major Jason Hughes and Major Angela Hughes with the Salvation Army as well as two representatives from Arthur, Alley and Associates consulting firm to partake in a mission study regarding of the partnership between the Salvation Army of the Albemarle Region and Dare County.

Shortly after Thanksgiving, a number of nonprofit CEOs received an email from the majors regarding a meeting to discuss the partnership between Dare County and the Salvation Army of the Albemarle Region. “The Salvation Army is looking to move to a physical location in the Outer Banks Region and we need your help to guide us to be the partner, you want us to be. We have a Mission Study group, Arthur, Alley, and Associates, that is helping us in this process. I would like to invite you to a meeting next week to discuss The Salvation Army and how we can best serve, alongside of you,” Major Jason Hughes stated the email.

Elisabeth Silverthorne, executive director at Beach Food Pantry, was one of the recipients of the initial email. Silverthorne shared that she had first met Major Jason Hughes right around Thanksgiving at an emergency food and shelter board meeting. “After that meeting there was a conversation where he said, ‘We are coming,’” she shared while noting that there is an agreement in place to share space with the Food Bank of the Albemarle. “If they can’t find enough space, they would do a joint capital campaign to build something suitable.” Silverthorne shared the email that came shortly after the board meeting with other Dare County nonprofit CEOs and executives, as was offered by the majors.

Over 40 individuals RSVP’d, and the meeting was moved from the Kill Devil Hills library to 3 Tequilas Mexican Restaurant. The group gathered at the restaurant around 2 p.m. Major Jason Hughes opened: “The Salvation Army has been serving out of Elizabeth City now for over a hundred and five years, and we’ve been serving this geographic region for quite some time … but one of the things we want to look at from time to time is how are we doing as a partnership agency … Our focus is how can be a better partner.”

The Salvation Army of the Albemarle serves eight counties, from Dare to the upper Albemarle region and out to Hertford. Last year the organization served over 11,000 persons. Major Jason Hughes noted that his branch has already partnered with Dare County on several fronts, such as supplying school supplies, working with social services and providing toys for the community youth. “Through these partnership opportunities, we continue to take and serve as more partnerships continue to unveil themselves,” he said.

The organization brought in Arthur, Alley, and Associates to conduct a mission study on the needs of the Dare County community and how the Salvation Army could potentially partner with the county in ways it has not already. The local stakeholders gathered at the meeting on December 8 served as an opening focus group for Dare.

During the meeting, each person was handed a survey in which they answered on a scale of 1 to 10 how well a certain need in the community was being met. Other questions “tested the waters” in terms of each representative’s knowledge and feelings regarding the Salvation Army and the potential programming they would provide within the county. Participants were then broken up into smaller groups to discuss their ratings.

Charles Nutt with Arthur, Alley, and Associates assured the survey was just to gather ideas. “Nothing will be happening anytime soon.” He added, “And we are also going to talk to a lot individuals. Our contract calls for 40 people that we should talk to throughout the service area; that will be some of you.” A final report will be delivered to the Salvation Army by April 1, 2023, consisting of demographics, statistics, observations and recommendations on how the organization should best proceed.

Once the groups took their seats after the survey discussion, several individuals expressed their questions and concerns. “I think being very transparent about what the plans are, that is extremely important to this community,” Silverthorne offered. “I do think that we have seen in the past where there were groups that came in and under the guise of partnership, there was confusion about how much they were actually benefiting the county and county services and that makes people more anxious here than they may be in another place.”

Terry Gray, commissioner of Kill Devil Hills and director of Dare County Motorsports Charity Group, voiced his concerns regarding the current increase in nonprofits and the potential for donors to become sparser with such a large organization making its way into town. Manteo’s Michelle Lewis, founder and executive director of the Peace Garden Project, spoke on behalf of the nonprofit leaders that were not yet a part of the conversation: “For you to not try to talk to as many people in this room as possible will do this community a huge disservice … The effort needs to be made … to represent the agencies that are in this room but also the agencies that aren’t in this room.” Dare County commissioner Ervin Bateman backed Lewis in informing the majors that there are 327 nonprofits in Dare County who have organized and raised funds tremendously well throughout the years, own their own without having much to start. He added: “Give us what we need … give us not what you want.”

In a follow-up call after the meeting, Major Jason Hughes said the goal of the meeting was to serve “as an opportunity for persons to express themselves. I heard the heart and passion of each board member … I heard a heart and passion to serve the people of Outer Banks and to protect the integrity and resources of those that need to be served. I appreciate that fact.” The next step is for Arthur, Alley and Associates to conduct individual interviews with representatives from Dare County as they work through the mission study. The final report will serve as a framework for the next steps to be taken by the Salvation Army in Dare County.