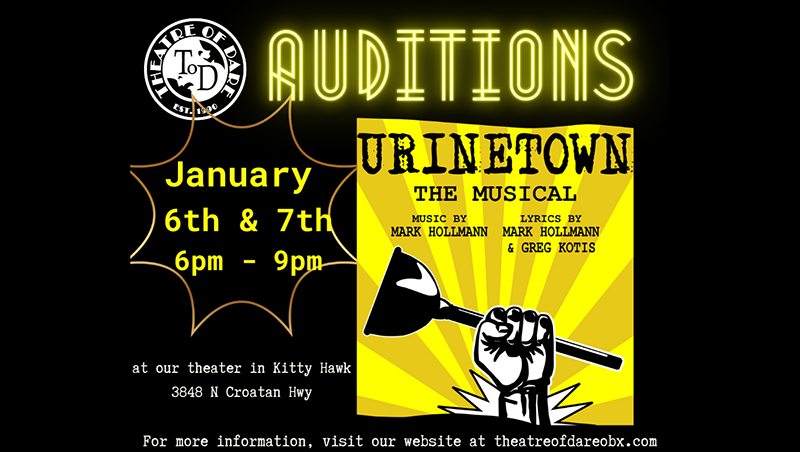 A popular comedy musical is coming to Theatre of Dare this spring and open auditions for the production will be held January 6-7 at the theatre in Kitty Hawk.

“Urinetown: The Musical” was a Broadway hit when it debuted in 2001, getting nominated for 10 Tony Awards and winning three. “The story involves a dystopian town in the midst of a 20-year drought, where private restroom facilities are outlawed and bodily functions come with a fee, charged by a malevolent corporation called Urine Good Company,” stated a Theatre of Dare press release. “Amid the chaos, a hero decides that peeing should be free, and leads a revolution to accomplish that goal.”

“Obviously, the entire show is a satire of politics, big business, social responsibility, and even musicals themselves” says director Gail Hutchison. “It has a message, but it’s wrapped up in great music, dance and a lot of laughs.”

Urinetown: The Musical involves a cast of at least 19 people, with added parts for ensemble. Those who would like to be a part of the production should prepare a song from the show and be prepared to learn a short piece of choreography. Once cast, rehearsals will begin in mid-January and run through the show dates of March 9-19. Theatre of Dare will also be on the lookout for backstage help with the production.

Auditions will be held from 6-9 p.m. on January 6 and 7 at Theatre of Dare. For more information and a list of roles, go to theatreofdareobx.com/urinetown.