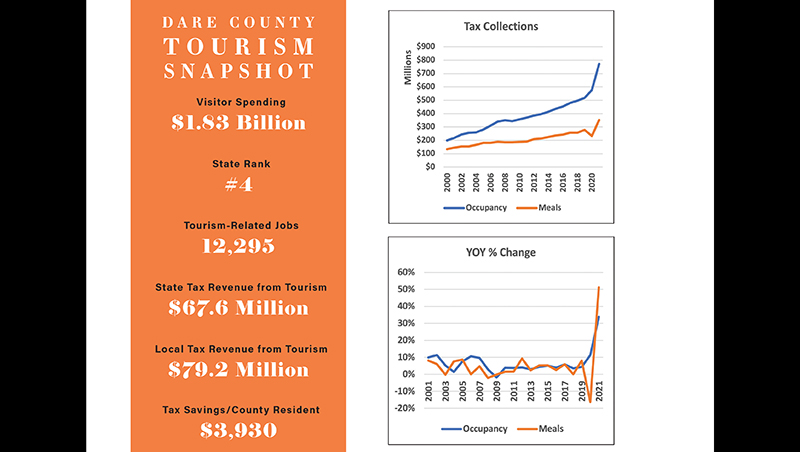 In Rodanthe, Dare County tourism officials provided information about the business of the Dare County Tourism Board and Outer Banks Visitors Bureau before launching into an explanation of the proposed Event Center.

Tim Cafferty, Tourism Board chairman, and Lee Nettles, Visitors Bureau executive director, made back-to-back presentations in early December. The first presentation, entirely on the Event Center, was to the Town of Manteo Board of Commissioners. The second night, Dec. 8, the duo started with basic information about the workings of the board and bureau.

Dare County’s business is tourism based on the hospitality of welcoming guests to the Outer Banks. That business generated $1.83 billion visitor dollars last year and ranked Dare County fourth among the state’s 100 counties. Ahead of Dare are Charlotte (Mecklenburg County), Asheville (Buncombe County) and Wake County.

The Dare County Tourism Board has 13 members, one from each incorporated town, plus members from the Outer Banks Hotel/Motel Association, the Outer Banks Chamber of Commerce, the Outer Banks Association of Realtors and the Outer Banks Restaurant Association. Two members are labeled at-large. One of the at-large members must be from Hatteras Island. The membership is set forth in the board’s enabling legislation passed by the General Assembly as Session Law 1999-177 on May 30, 1999.

The bureau is funded by a 1% tax on overnight accommodations and a 1% tax on prepared meals. The legislation dictates that, after paying for an audit, the board must spend 75% of the revenue on promotion and 25% on programs and services needed due to impact of tourism.

Some 70% of that revenue is collected in June, July and August. “We’ve got to flatten that out,” said Nettles, who pointed out that attracting visitors in less than peak months will increase stability in jobs and, possibly, in housing.

Restricted fund tourism-impact grants are offered to local non-profits and governmental units. The application window is September of each year. For the 2022-23 fiscal year, the Tourism Board with consent from the Dare County Board of Commissioners awarded eight Tourism Impact Grants, three of which are on Hatteras Island. For the island, $200,000 is slated as matching funds for a grant for the Frisco-Buxton Pathway. Some $34,595 is allocated to Outer Banks Forever to replace the Historic Weather Bureau Signal Tower in Hatteras village and $132,000 will help fund the Cape Hatteras Lighthouse Pathway, another project of Outer Banks Forever.

In addition, from Long-term Unappropriated funding, the Frisco-Buxton Pathway has another $200,000 and the Friends of the Graveyard of the Atlantic Museum received $250,000 for new exhibits.

Over the 20 years that the Outer Banks National Scenic Byway and partners have built or proposed to build pathways on Hatteras Island, the Dare County Tourism Board has provided $900,000 in funds for matching grants and over $300,000 for construction, for a total of $1.2 million.

Over the last six years, the Tourism Board has pumped a total of $1,589,199 into projects on Hatteras Island, said Nettles.

Briefly, the Event Center, planned for the existing Event Site in Nags Head, will have an event hall of 26,000 square feet, a 15,000 square-foot meeting room, a training/test kitchen and almost 18,000 square feet in lobby, bathrooms, etc. A retractable wall is featured and numerous sport venues are possible, including basketball, pickleball and volleyball. The capacity runs from 300 to 2,500 people.

The facility is anticipated to operate at an annual deficit of $312,000. The projections show 14,000 new room nights, $1.17 million in new tax revenue with $25.15 million in new spending and 191 new jobs with nine full-time employees at the Event Center.

Nettles didn’t wait for someone to ask “what’s in it for Hatteras Island?” Nettles answered additional tax base, a venue for recreational sporting events, new jobs and a year-round tourism economy.

The meeting was attended by about 20 people from Hatteras Island’s northern villages.