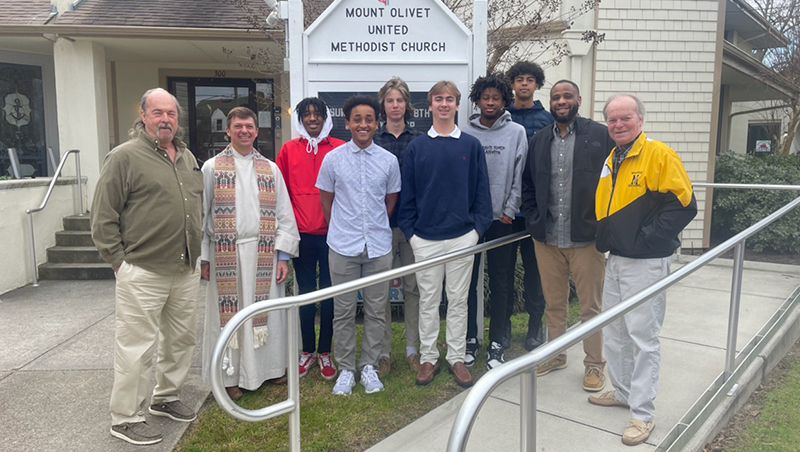 Players and coaches from the Manteo High School varsity boys basketball team have been attending different area churches as they are able to on a voluntary basis. Attending Mount Olivet United Methodist Church in Manteo on Sunday, January 8 were, from left, coach Eric Pruitt, Pastor Mark O’Neal, Amyas Kenyon, KaDu Close, Taylor Granitzki, Will Waughtel, DaShay Brickhouse, Kaleb Spencer, coach Tim Charity and Hunt Thomas. Churches have been donating bag lunches for the team when they have away games. Tonda Pruitt photo

The Manteo Redskins boys basketball team traveled to Pasquotank on Friday, January 6, 2023 to take on the Panthers. According to a game report from Manteo coach Eric Pruitt, the game “turned out to be the most mentally, emotionally and physically challenging game thus far.”

Redskins starters struggled in scoring and faced several fouls early in the second quarter. With three Manteo starters with three fouls each, the bench was called on to keep the Redskins in the game.

Third quarter play began with non-starting players. They had the lead until 53 seconds left to go in the quarter, when Pasquotank went up for the first time 31-29.

Starters were back in the game for the fourth quarter. Manteo was down 35-32 with 2 minutes 22 seconds left in the game when Amyas Kenyon hit two 3-pointers and one free throw to secure the win for the Redskins, 39-37.

“The team members played great defense in the face of adversity,” noted Pruitt.

Manteo now stands in first place in the conference with a record of 4-0 and 10-1 overall.