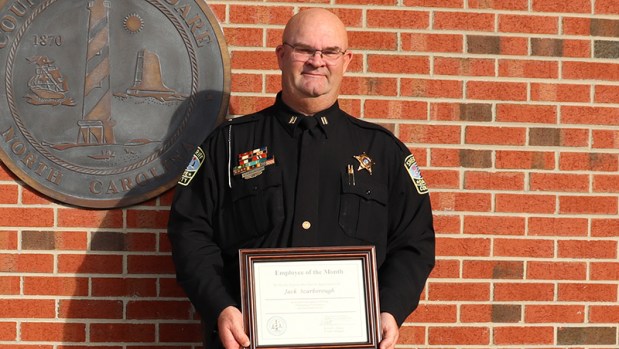 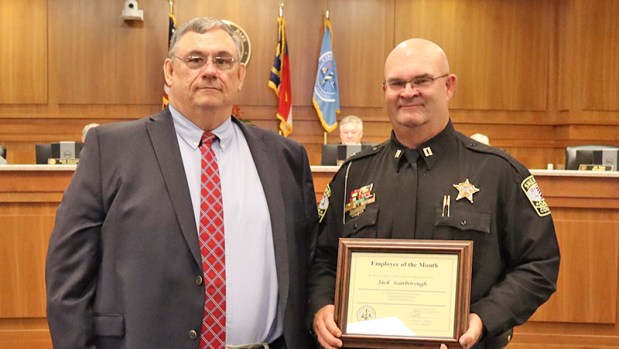 Born and raised in Avon on Hatteras Island, Scarborough began his career with Dare County on December 14, 1998, when he was hired as a deputy sheriff for the Dare County Sheriff’s Office.

“I like to hire homegrown,” said Doughtie during his award presentation. “He was born in Avon and grew up down that way – fished, hunted and made good friends – but somewhere, I believe, as real police officers or law enforcement do, he knew what he wanted to do at an early age. He wanted to be a police officer.”

After earning his associate degree at Wilson Tech, Scarborough accepted a position with the Wilson Police Department, where he served until he was old enough to return to the Outer Banks and seek employment with the Dare County Sheriff’s Office.

“At that point in time, you had to be 21 years old to be a deputy [for Dare County],” said Doughtie. “When he got to be 21, he came down and got sworn in, so it was a win-win for us – and for the Dare County people – because he knew everybody down there. He was a perfect fit in the community.”

As a sworn law enforcement officer in his native Dare County, Scarborough earned a series of promotions over the course of the next 25 years with DCSO that reflected his passion, hard work, dedication and service to the residents and visitors of the Outer Banks.

In his role as director of the 911 Communications Center, Scarborough is tasked with overseeing the day-to-day operations of the 911 Communications Center in Manteo and managing its staff of telecommunicators who are responsible for receiving and responding to both emergency and non-emergency calls, as well as dispatching the appropriate police, fire and emergency medical services personnel throughout Dare, Hyde and Tyrrell counties.

Despite having had some initial hesitation regarding his recent transition from deputy sheriff captain to director of the 911 Communications Center, Scarborough received numerous nominations for the Employee of the Month award, portions of which were read by Doughtie during his presentation at the Board of Commissioners meeting.

“When he hears what a couple of these people wrote about him, he’ll know that he made the right decision and that he jumped into the right place – and that he’s very well appreciated for what he does, and I’m very appreciative of what he does,” said Doughtie.

Doughtie then proceeded to read some of the words Scarborough’s colleagues wrote on their nomination forms:

“Jack Scarborough excels in his role as [911 Communications] director and is very deserving of the Employee of the Month award,” Doughtie read. “From the first day he started this position, he began improving the infrastructure, workflow and employee morale at the Communications division. Jack led the charge for modernizing our VHF paging system, facilitating the upgrade to more robust hardware capable of getting critical information to our first responders. He is a boots-on-the-ground kind of supervisor. When it came time to reprogram all the public safety radios in the county, he grabbed a laptop and went to work. He is always willing to step in and help in any way possible. He is the kind of person that is an absolute pleasure to work with and to be around. He is easy to talk to. In the face of adversity, he remains calm and focuses on finding a solution. I enjoy every day that I get to work with him. Jack is more than just a supervisor; he is a friend and a true leader deserving recognition.”

Doughtie then continued by reading from another nomination form that praised Scarborough for his exceptional leadership, his dedication to learning new skills and his willingness to jump in to provide assistance to his colleagues when needed:

“Jack is a true leader who knows how to inspire his team and is trusted due to following through with his words and actions,” Doughtie read. “He provides support and focuses on developing the skills needed to achieve objectives. Jack came into the [911 Communications Center] and immediately sat down and worked in the center to understand the challenges, concerns and needs of the 911 telecommunicators. He has even attended [telecommunications school] and is a certified telecommunicator. When needed, he will put on a headset and fill in on shift.”

In addition to those who work alongside him within the 911 Communications Center, Scarborough also received considerable praise for his efforts and abilities from other colleagues, including county manager/attorney Bobby Outten, who noted how he had made such a smooth and seemingly effortless transition from deputy sheriff captain to director of the 911 Communications Center following the retirement of former director Trey Piland.

“When Trey retired, [Sheriff Doughtie] called me and said, ‘Trey’s retired.’ I said, ‘Oh, my gosh. What are we going to do?’ Because whether you know it or not, our communications system is one of our more complicated departments that we have, and you can’t just walk in there and do that – or so I thought,” said Outten. “I have to say, it has been seamless. For someone who wasn’t the communications person and was a law enforcement officer out on the street to walk in the front door and take over a department like that, that is as complicated as that – not just operationally but financially – I can tell you that it has been seamless. It has been as smooth a transition as it can be, and that’s a testament to Jack. It’s amazing to me that he can walk in there from scratch and hit the ground running like he did. So great job, and we’re glad to have you.”

In addition to his service to Dare County, Scarborough also works with the Hatteras Island Rescue Squad and the Governor’s Highway Safety Program, which promotes efforts to reduce traffic accidents throughout North Carolina and encourages highway safety awareness through a variety of grants and safe-driving initiatives.

Upon receiving his January 2023 Employee of the Month award at the conclusion of Doughtie’s presentation, Scarborough thanked the Dare County Board of Commissioners while also noting that the exceptional and essential services that are provided at the 911 Communications Center are ultimately a team effort.

“Everything I do over there, it’s not me – it’s the 28 other folks that are over there,” said Scarborough. “It’s a great team. We’re all in it together. It’s not one person, but thank you!”

For more information about the Dare County 911 Communications Center, go to darenc.gov/departments/sheriff-s-office/divisions/communications-911.