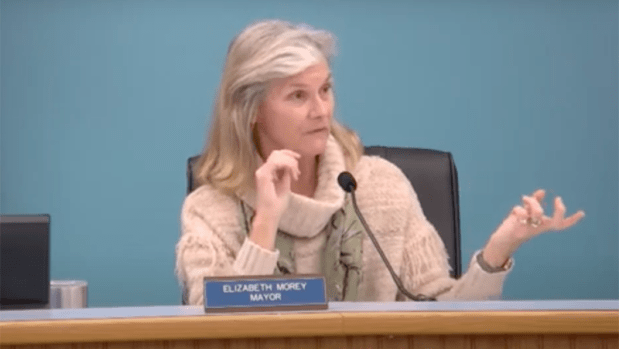 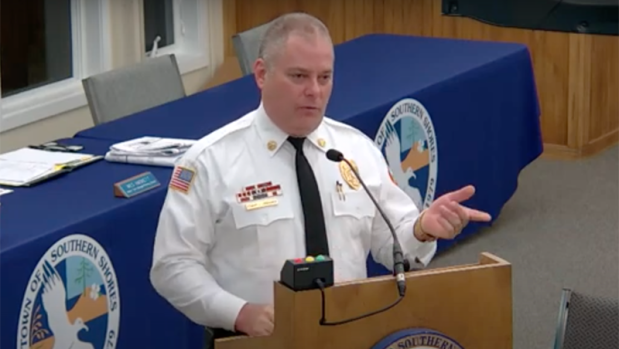 Southern Shores Fire Chief Ed Limbacher reports to the board about an unexploded ordnance found in a resident’s backyard. Southern Shores video still

The Southern Shores town council meeting on January 3 opened with a presentation from Kitty Hawk Elementary Principal Dr. Lisa Colvin and parent Kelly Flock about their plan to replace the playground structures at the school with the goal that all children be able to play together.

The school has obtained a grant for a more accessible playground Walmart for $30,000. Dare County Schools allocated $90,000 to each elementary school to update their playgrounds as part of its capital outlay budget – Kitty Hawk Elementary School requested to hold their allotment in reserve for this project.

The cost of the two separate playgrounds will total about $800,000.

The playgrounds will have solid surfacing over all playground areas and several adaptive swings, ensuring that all school children can play together on the structures.

The school’s PTA has created a website (khesplayground.com) with information and fundraising options. The project leaders hope to break ground by the end of 2023.

Next, town manager Cliff Ogburn gave council members good news about the resolution to the beach nourishment project. Ogburn said Weeks Marine will return in March to place 37,500 additional cubic yards of sand to the northern beaches, bringing every station north of Fifth Avenue to 22 cubic yards per foot.

He said the town contracted for 894,500 cubic yards of sand and received in excess of that. “We’ve got all the sand we paid for it just wasn’t in those northern few stations that we felt it needed to be,” he added. Ogburn noted that part of the issue was natural erosion and sand loss from the time the bid was put out in November 2021 to the time the project was begun in October 2022.

During staff reports, Fire Chief Ed Limbacher gave an update about an unexploded ordnance that was reported by residents while their children were digging in their backyard on January 2. After examining it, Limbacher called in the Department of Defense, who detonated it on scene. Limbacher said there was about a five-foot hole caused by the detonation. “Most of the time it’s the practice flares … but you do come across this stuff. This is the first one I’ve actually had to explode. This is not a rare occurrence by any means but it’s not an everyday occurrence either,” he said.

Said Mayor Elizabeth Morey, “It’s true to say that basically most of the footprint of our town is a former practice range from World War II, just like up in Duck. And so there’s entirely a good chance that these things are still out there.”

Limbacher reminded the public: “if you find something like that please don’t touch it.”

Council moved on to hold a quasi-judicial hearing for a special use permit request to construct a new EMS fire station at 28 East Dogwood Trail and Highway 12. The project will replace the existing EMS and fire station and include a new septic system as well as improved parking for visitors and staff. The request was approved.

Council also approved a town code amendment to add a section that includes a conflict of interest statement. This state requirement says town staff or voting members cannot have a direct substantial and readily identifiable financial impact on a matter.

Town attorney Phillip Hornthal gave a brief update on the Mid-Currituck Bridge litigation: “The oral arguments took place on the fourth circuit about the Mid-Currituck Bridge and I learned a long time ago not to read juries or judges by what was said or what was not said. But the questions that were posed … there were a lot of good questions asked that allowed our lawyers to say things that were helpful.”