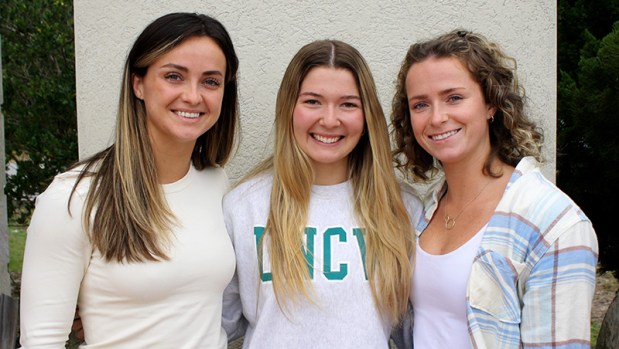 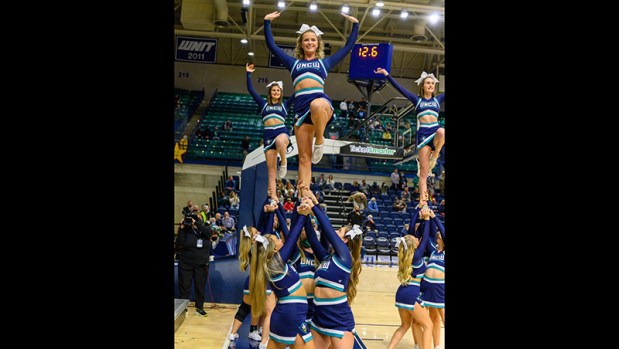 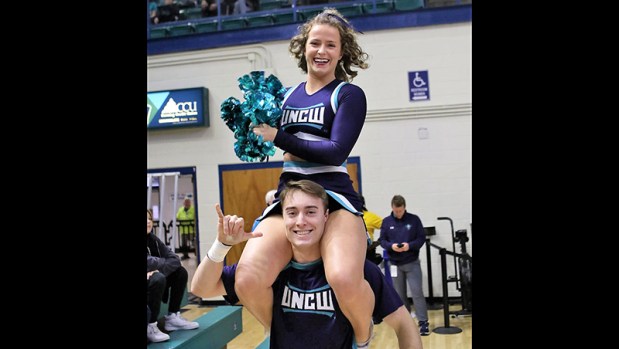 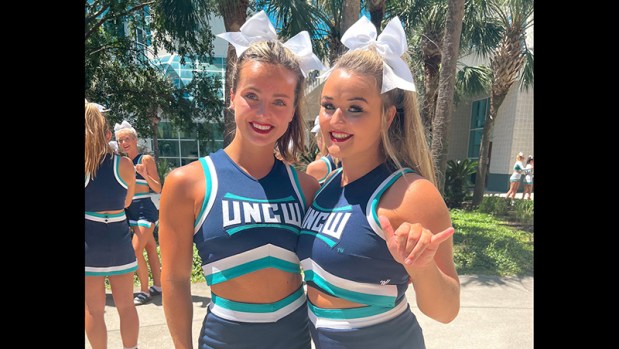 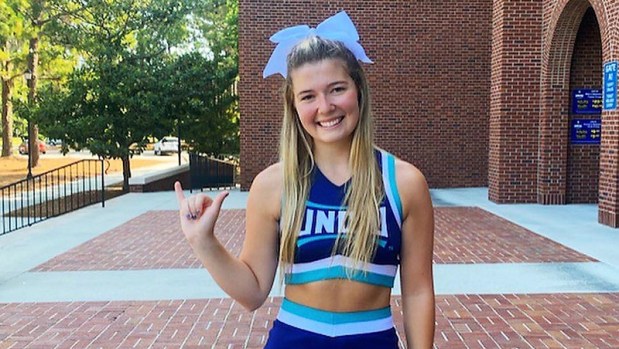 Shelby and Hayley Miller are flying high as Seahawks cheerleaders at the University of North Carolina Wilmington. With the men’s basketball team having a great run this season, these two “beach kids” led the cheer squad.

Their stunts, tumbles and pyramids thrill the raucous crowds in Trask Coliseum during home games. In fact, the twins, in navy blue uniforms, cheered everyone on last Wednesday night, Jan. 11, when the Seahawks lost to College of Charleston 71-69.

The loss broke UNCW’s 13-game winning streak, which was the longest in program history and best in Division I basketball nationwide so far this season.

It’s in these heated, sold-out games that Shelby and Hayley shine. Videos posted online by their mom, Beth Morrell Miller, show the girls – who are both seniors – atop tall pyramids or doing flips all the way down the long length of the court.

“The crowd likes to see as many as you can do!” she noted.

They explained that cheering at UNC-W isn’t a varsity sport but considered a spirit group like band, Shelby said. In fact, there are two squads of cheerleaders – the coed Blue squad and an all-female Teal one.

Another former First Flight High School cheerleader made the Teal squad this fall, class of 2022 valedictorian Brylie King. An environmental sciences student, King hopes to move up to men’s basketball next year.

She explained the program is set up like varsity and junior varsity with all Teal squad members being first year students. After graduating from First Flight last June, King first thought about ending her cheer career.

“’I’m done,’” she said to herself. “Then I saw open tryouts … I’m glad a I did!” Her freshman year is going well and she likes all of her classes. It’s been nice to get a break from work at Publix in Kill Devil Hills, where she’s worked since age 14.

King’s also pretty good at lacrosse and she has considered playing club ball at UNC-W. Hayley also mentioned that another First Flight cheerleader alumni, Koral Tucker, also made the Seahawks team but took this year off.

So why do student-athletes from the Outer Banks and First Flight do so well in cheerleading at this university? Yes, the Nighthawks coaches and program is strong but is there something else?

“I think Outer Banks kids have a good work ethic,” Hayley said. “A lot of kids in Wilmington haven’t worked a day in their life.

“I think the Outer Banks made us people with strong work ethics,” she added.

And the Miller twins, as they’re sometimes called, have made the most of this trait in their daily lives at school and the court cheering on the Seahawks.

This new coach was hired last July and has been more involved in general and has worked on important projects such as on campus housing for her athletes, Hayley said.

But both Shelby and Hayley are proud of what they’ve contributed to the squad, which includes males, too.

“It’s a lot of work for us,” Hayley said. “We’re in charge of the choreography.”

While most college students enjoyed their final week of Christmas break visiting ski resorts or in tropical locales, these cheerleaders were back in Wilmington for a full week of practice.

But again, hard work is the norm for all three of these cheerleaders. Shelby knows she’s headed back to working six nights a week for her family’s restaurants after graduation in the spring.

She works at American Pie Pizza and Homemade Ice Cream and Hayley works at Miller’s Seafood and Steakhouse across the street in downtown Kill Devil Hills.

Eventually, Shelby hopes to open her own counseling practice after completing her master’s degree. Hayley plans to return to Miller’s full time where additional members of her family also work six nights a week, including her dad Brian.

It’s inside these restaurants that are full of hungry sun-burned vacationers that some of the lessons about hard work are learned. Others, such as cheerleading or lacrosse, are learned in other ways including on travel teams.

“We have to work hard to get what we want,” Shelby said. “If that means driving to Virginia then go get it!”