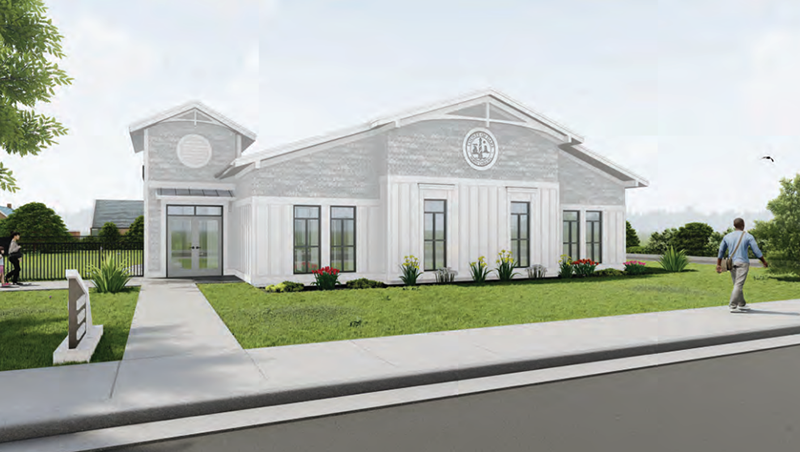 The Manteo Board of Commissioners approved two special use permits, a modified zoning text amendment and appointed advisory boards at its January 4 meeting.

Dare County is proposing to build a new 4,318 square-foot youth center on three-quarters of an acre bounded by Agona Street, U.S. Hwy. 64/264 and Fernando Street. The property in Manteo is zoned B-2 General Business.

The town’s Preservation and Architectural Review Committee reviewed the proposed plans twice and developed an eight-item list of comments, such as roof pitch being an issue, the building is too small to meet the needs of 40 young people now attending with 40 more on the wait list. Additionally, it was said the building does not follow the Manteo Way of Building.

The Planning Board recommended approval based on the project meeting the town code.

In board discussion, Commissioner Sherry Wickstrom expressed concern about the roof pitch.

“The county has always been a good partner,” said Wickstrom, who recommended asking the county to take another look at complying with Manteo’s recommended roof pitch.

Dustin Peele, the county’s project and purchasing manager, responded “We will do what we can.” He commented that a sign will be placed in front of the building and the county’s seal will not be affixed to the building. Rafter tails will be considered as will changing the roof pitch, as long as it is cost effective.

The motion made by Commissioner Betty Shelby granted the special use permit with the conditions recommended by town planner Matt Farmer. Those conditions are:

—Hours of exterior construction activities, including operation of bulldozers and other earthmoving equipment shall be limited to 7 a.m. to 7 p.m. or dusk, whichever occurs first.

—Parking lot lighting shall be directed to minimize glare on public roads and adjacent properties. The parking lot has 15 spaces.

—Place handrail or fencing placed along the southern walk between the drainage basin and Fernando Street.

—Install a natural landscaped buffer/screening or privacy fence located on the property line to the east adjacent to the residential dwellings.

—Use rafter tails similar to the ones on the College of The Albemarle building.

A field house for softball is proposed for Manteo High School. The high school operates under an existing special use permit so the field house requires an amendment.

Town staff found the “proposed use consistent with the Manteo High School Special Use Permit, the Town’s Zoning Ordinance, and the Comprehensive Land Use Plan” and recommended approval, which was unanimously granted by the commissioners.

In December, the commissioners reviewed changes to the text of zoning district B-1 Village Business District. The changes recommended by the Planning Board were define retail services and building height; replace the word commercial from B-1 language and replace with retail; add yoga studios, wine shops and breweries; and reduce lot coverage percent.

Unlike the two special use permits, this board action brought public comment. Malcolm Fearing said the proposed tweak could make existing buildings non-conforming.

Town attorney Ben Gallop announced two changes to the draft that were regarded as typographical errors.

The board adopted proposed changes except the staff-recommended change for lot coverage was eliminated. Lot coverage remains with no restrictions, meaning buildings can be built up to the set-back lines.

In other action, the commissioners:

—Approved budget amendment 4 which recorded revenue from the transfer of American Rescue Plan funds into the General Fund. These resources were use as revenue replacement for salaries and benefits in town administration, police and public works in fiscal year 2022-23.

In the same motion, the board approved transfer of $10,000 to travel and training to cover leadership training for an investigator.

—Adopted a resolution naming town manager Melissa Dickerson and finance director Heather Doughtie as employees who may access, make decisions regarding and process the contents of the Town of Manteo’s safe deposit box currently located the Manteo PNC branch.

The board made the following appointments:

—Board of Adjustment: reappointed Douglas Backman and Jackie Myers

Planning and Zoning Board: two positions available and four people that have expressed interest in being appointed for a two-year term: Hal Goodman (re-appointment); Fields Scarborough (re-appointment); Douglas Backman; Sheila Garrison. The Board of Commissioners will also need to appoint a chair for the Planning Board. The commissioners delayed these appointments to Feb. 8, 2023.