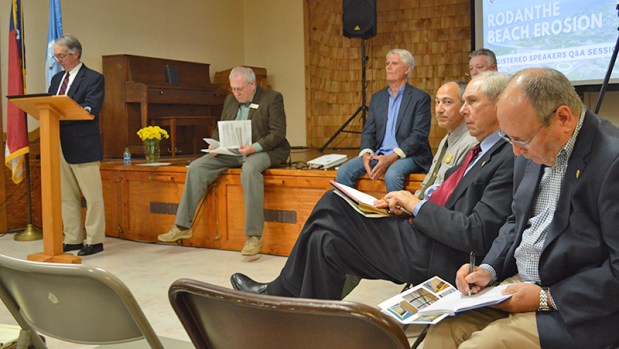 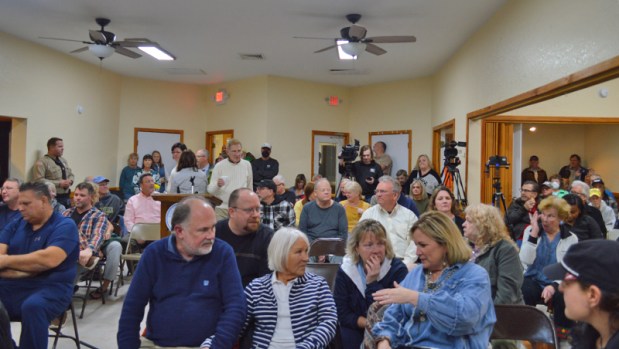 A crowd gathered for Dare County Town Hall meeting in Rodanthe on beach nourishment. Over 100 people were in the Rodanthe-Waves-Salvo Community Building and another 160 people attended the meeting virtually. M.H. Goodloe-Murphy photo

A town hall meeting in Rodanthe Wednesday night drew more than 100 people to the Rodanthe-Waves-Salvo Community Building and another 160 people virtually to hear a county presentation about erosion and beach nourishment and for questions to be answered.

Dare’s county manager Robert. L. Outten made the presentation and answered questions. He reviewed the county’s history with beach nourishment and how it is financed.

Over three decades ago, Dare County and Nags Head started talking about beach nourishment, which was controversial. At the time, the federal government, through the U.S. Army Corps of Engineers, proposed a 10-mile project with 70% federal funds, 20% state and 10% local.

To pay for the local share, the General Assembly created an occupancy tax.

No federal project was funded for Nags Head and in 2011 the town and Dare County agreed to proceed with the county paying half the cost and Nags Head the other half.

The occupancy tax is levied at 6%. The county’s Beach Nourishment Fund receives 2% of the revenue.

The fund’s three policies evolved: put sand where it is needed; hold funding for maintenance every five years; and save enough to cover one year of debt service.

For Rodanthe in 2013, the county commissioned a study to determine an estimated cost of a project. The county has asked that the study be updated. The results will tell the quantity of sand needed and therefore the cost. The 2013 study showed a cost of $20 million, which Outten said would “not be enough” for project today.

A hypothetical project area would run from Mac Oca Drive, which is sandwiched between Camp Hatteras and the Cape Hatteras KOA and Rodanthe’s northern boundary, about 2.25 miles.

Outten told the crowd that the fund had about $6 million available to put somewhere, but an estimated cost for the Rodanthe project is $30 million.

In Rodanthe, one cent on the tax base yields $23,000, which Outten said would not generate enough money to tax a way out of the situation.

He indicated the two other sources of funding were federal and state. He stated that the original beach nourishment project funding for Nags Head was not available.

Outten said “a lot of money was floating around.”

During public comment time, Jett Ferebee listed six different programs funneling money to the National Park Service. He stated “this is a federal issue … We need some federal help.”

Later in the meeting, David Hallac, superintendent of the National Parks in Eastern North Carolina, responded to Ferebee.

In a follow-up for clarification, Michael Barber, public information officer for the national seashore, released this statement: “Cape Hatteras National Seashore submitted to the National Park Service the need to cure transportation vulnerabilities along NC-12 on Pea Island, between Frisco and Hatteras Village and at the north end of Ocracoke Island. It is unknown whether these needs will be eligible for funding through the Great American Outdoors Act or any other funding initiatives.”

Outten reported a Wednesday morning meeting in Currituck County with the area state legislative delegation. “Our delegation is a coastal delegation. They get it.” Coastal county representatives are working toward seeking funding from the state.

The problem, said Outten, is finding a recurring state funding source, which is a similar situation that Hallac described for federal funding: beach nourishment is not a “one and done” appropriation.

At the end of his presentation, Outten summarized the overall situation. The county has no funding available for Rodanthe. If money is available, what are the priority areas for Hatteras Island: Canal Zone? Isabel Inlet between Frisco and Hatteras? Rodanthe? All are at risk. “Hard decisions that have to be made.”

Outten answered questions that were submitted in advance of the meeting. Answers included:

– No project is scheduled for Rodanthe.

– Erosion has always been an issue. Outten believes that the erosion rate has changed.

– Terminal groins or sea walls are not permitted on North Carolina beaches. Only tools available for oceanfront property owners are beach nourishment or temporary sand bags. The county doesn’t have authority to do experimental stuff.

– The next step in moving forward with nourishment is “put a price tag on it.”

– Asked about soundside erosion, “we don’t have a plan.” Multiple tools are available to property owners.

– About the state’s buyout program, Outten said the original $180 million was cut to $120 million. Of that, 50% is required to be spent in underserved areas, which cuts the available pool to $60 million, which is to be used in areas affected by Hurricane Matthew and then for residents first. “It is very unlikely” that the program can do something for second homes.

That Outten’s presentation was effective was evident when he began calling the names of people who signed up for public comment. Would-be speaker after speaker said questions had been answered. Those that did speak numbered eight.

Kyle Banniak said: “this is a Hatteras Island issue … We just can’t give up.” He received applause.

Kathleen Kosman advocated for a small project, like installing sand bags.
Matt King asked if the county would consider creating a different type of financing model.

Refreshments were served by the Rodanthe-Waves-Salvo Civic Association.