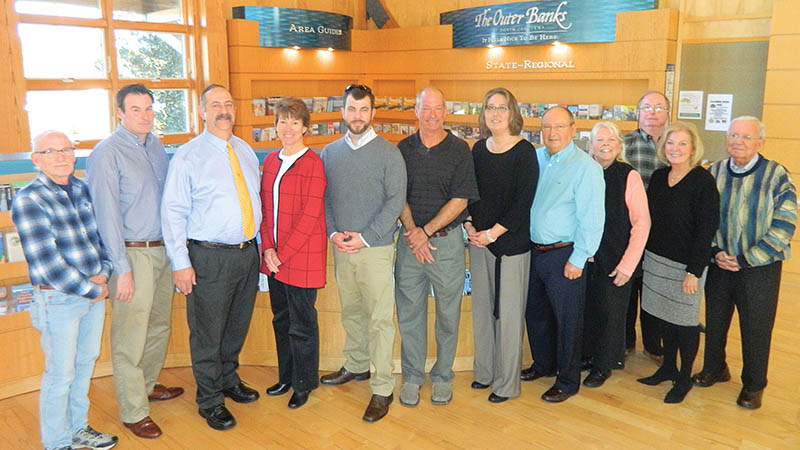 Members of the Dare County Tourism Board spent the first few minutes of the Jan. 25 meeting conducting a swearing in ceremony for eight new and returning Directors and then selecting a new slate of officers for the coming year.
Taking the lead, W. Jay Wheless, attorney for the Board, walked Board members through the Steering Committee election process where, on the recommendation of the Board’s nominating committee, the leaders for 2018 will be Myra Ladd-Bone, Outer Banks Chamber of Commerce representative, as Board Chair; Wally Overman, Dare County Commissioner, as Vice Chair; Tonia Cohen, Outer Banks Hotel and Motel Association representative, as Secretary; Pat Weston, Hatteras Island-At-Large member, as Treasurer; and Bambos Charalambous, Dare County Restaurant Association representative, as Assistant Treasurer.

Leading off was John Griffin, President of Chicamacomico Historical Association, who covered a number of details behind the 100th anniversary celebration of the famous 1918, British tanker Mirlo rescue.

The Mirlo rescue is considered one of the most dramatic and heroic operations in U.S. Coast Guard history. Hit by a German torpedo off the Hatteras Island coast on Aug. 16, 1918, the British flag tanker Mirlo was sinking in a sea of burning fuel and wreckage. Fighting rough seas, flaming gasoline, and considerable smoke from surrounding burning wreckage, the Chicamacomico Station crew rescued 42 of the seamen in distress.

“I gave you a one page history of the Mirlo Rescue,” Griffin told Board members. “I could have given you a 40 page history.”

Griffin then said the Chicamacomico Lifesaving Station would open for the season April 12 and a more detailed schedule of events for the anniversary event would be published later in the season.

The next presentation included details by Dare County Tax Collector Becky Huff and Takeyia Berry, who handles beverage and occupancy tax collections, on several rental tax issues with most of the information focused on how Dare County interacts with agencies such as Air B&B, VRBO, and other on-line travel agencies.

“Finding a body to talk to for VRBO and Air B&B is proving to be extremely difficult,” said Huff. “They are all on-line Internet-based companies, but we are working on it.”

Berry went on to explain how taxes are collected from the various agencies, the efforts to educate owners on providing the required tax revenues, and the research needed to locate owners providing short term rentals.

When asked about how many rentals there might be in Dare County, Huff said the estimate could be from 1,500 to as high as 3,500 but because owners could rent through several different agencies, and possibly be counted several times, there is no accurate way found to track them.

In a final presentation of information, Dare County Tourism Board Executive Director Lee Nettles advised Board members that offshore exploration for oil and natural gas is back in the news.

“It’s kind of coming at us with a full head of steam,” said Nettles. “We’ve been up against this issue and contended with it several times. Most recently there have been proposals to open up leases practically everywhere.”

He went on to say the last time the Bureau of Ocean Energy Management held several meetings as part of the public process. This time, however, meetings are limited to one per state, the process seems to be moving faster, and appears to be more assertive.

“That means we need to rally the troops quickly and make their voices heard,” cautioned Nettles.

According to Nettles the Board has already expressed opposition with resolutions in 2005, 2009, and 2014.

During discussion Nettles presented a series of charts with comparisons between existing tourism revenues, expenditures and jobs for the eight ocean counties and 20 coastal counties with projections from the oil and gas industry.

“You may notice,” said Nettles, “tourism numbers show the job totals through 2016 are comparable for the mid-level oil and gas number 20 years from now.

While discussing the benefits any exploration and production may have, threats to the environment and the impact on outdoor recreational activities were not overlooked.

“As we’ve shared before,” added Nettles. “here in Dare County one of every three persons living here is currently employed in a travel and tourism-related job.

To illustrate the importance of tourism to Dare County, and the value of tourism to the state of North Carolina, Nettles reminded the Board that in 2016, Dare County tourism generated an economic impact of $1.1 billion, ranking fourth among the state’s 100 counties in terms of travel impact.

Overman then pointed out that virtually all work done will be out of Tidewater and he could not understand how North Carolina would benefit to the degree promoted by the oil and gas industry.

Nettles then explained that the oil and gas projection numbers on his chart are from a 2014 report while tourism numbers are actual numbers generated.

“My thought was,” explained Nettles. “If I could put real tourism numbers against the best oil and gas projections out there and we still have a good argument, then it only get better from there. I just took what they said as gospel to see how they stack up.”

He then added that there is a huge assumption on some of the oil and gas numbers used.

Nettles concluded saying that in the past a 40-mile buffer was proposed but this time the buffer is only three miles and while the possibility of a new oil and gas industry could diversify and grow Dare County, it could also wipe out our entire economy.

The Tourism Board then renewed its strong opposition offshore exploration and authorized Nettles to speak for the Board in opposition with updated figures for his charts.

The next Dare County Tourism Board meeting date was set for Thursday, February 15, at 9 a.m. at the Sarah Owens Welcome Center on Roanoke Island.