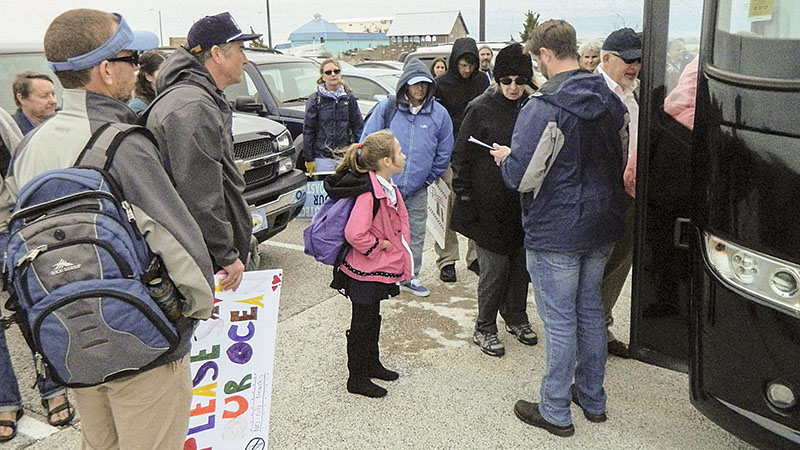 Protesters aboard chartered buses from Nags Head, Wilmington and Morehead City converged on the North Raleigh/Midtown Hilton Hotel Monday in an effort to let Bureau of Ocean and Energy Management officials know that coastal residents do not want oil and gas exploration off the North Carolina coast.

Speaking in competition with a CBS news commentator broadcasting a few feet way, Regan told the crowd that every voice matters. He went on to say the governor’s message is clear: not off our coast, not now, not tomorrow.

In January, President Donald Trump’s administration announced plans to open almost all federal waters to oil and gas exploration. Expanding offshore drilling to the Atlantic has mobilized much of North Carolina in an effort to protect the state’s beaches, economy and way of life.

At another part of the Hilton for an open house question and answer session BOEM staff entertained the public with details about opening up North Carolina’s coastal waters to oil and gas exploration and seismic testing.

In 2015, when federal officials proposed opening ocean waters off the coast of North Carolina to drilling for gas and oil, meetings were scheduled in a number of coastal areas to hear what local residents had to say. More than 600 people attended the Kill Devil Hills meeting for a large show of opposition. In contrast to previous similar announcements, this series of public hearings are pretty much limited to one per state capitol, a move that many feel as an effort to suppress coastal voice.

It proved to be a decision with low impact as voices continued to ring out during and between speakers against drilling.

Throughout comments by Davies related to health concerns and Woodard’s encouragement to “stay the course,” the common thread of opposition to drilling prevailed.

Even with a reminder from Outer Banks Visitors Bureau Executive Director Lee Nettles that while we are a nation dependent upon oil and gas, it is just not wise to put a $3.4 billion economy in jeopardy.

Earlier this month, Dare County and each of the county municipalities issued resolution opposing off shore drilling. In addition, several Outer Banks representatives were at a February 15 meeting with representatives of the U.S. Bureau of Ocean Energy Management and Interior Department on the issue.

The deadline for making public comments on the proposed federal changes that would permit offshore oil drilling is March 9. 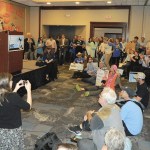 LEE NETTLES, executive director of the Outer Banks Visitors Bureau, told Raleigh rally participants that it is just not wise to put a $3.4 billion economy in jeopardy with off shore drilling. (P. S. Ruckle Jr. photo) 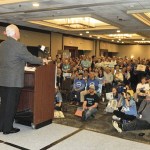 ROBERT WOODARD, chair of the Dare County Board of Commissioners, was one of several speakers at a Don’t Drill NC rally at the North Raleigh/Midtown Hilton Hotel on Monday. (P. S. Ruckle Jr. photo) 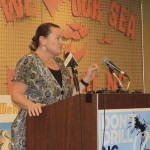