On March 2, 2018, Glenn Hoggard-Autrey died peace-fully at her home. She was born on August 2, 1925 in Cross City (Dixie County), FL to Riley Gordon Granger Sr. and Merle Van Sickle Granger. With her three sisters and brother, the family followed the lumber business living in Branford and Kissimmee, FL.

She graduated from Monte Verde Academy in central Florida and attended Brenau College in Gainesville, GA before moving with her sister Doris to Winston Salem, NC. There she met Bill Hoggard who was serving in the US Army Medical Corp. They were married in Lake City, FL where her parents had established a lumber milling business. Glenn and Bill later moved to Toledo, OH where Bill completed his medical residency. 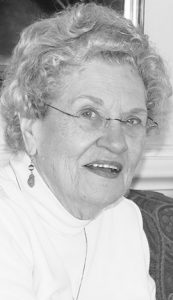 Bill opened his medical practice in Manteo, NC where they lived until he returned to Winston Salem to complete his medical training in obstetrics and gynecology at Bowman Gray.

They moved to Elizabeth City where they established a medical practice, home and made lifelong friends. Glenn and Bill raised and loved three boys and lived happily until Bill died in 1992. Glenn remained in EC and was active in her bridge club and other pursuits.

In 1999 Glenn married Daniel L. Autrey Jr. of Kissimmee, FL. Glenn and Dan split time between Elizabeth City and Kissimmee before settling permanently in Elizabeth City where they lived until Dan’s death in 2008. Glenn remained in her Elizabeth City home and enjoyed her family and friends until several health issues slowed her down.

She was unselfish and fiercely loyal to family and loved being a wife, a mom, a homemaker and friend – all in an understated, private, and simple way. She loved her family, especially the grand-children, music, books, tv cop shows and her morning newspaper and coffee.

Glenn was preceded in death by her parents; two sisters, Patsy and Marjorie; a brother; Riley; a baby daughter; husbands Bill Hoggard and Dan Autrey; and son, Riley Hoggard.

A Service of Reflection will be held on Friday, March 9, 2018 at 1:00 p.m. at Twiford Memorial Chapel, Church St., with the Reverend F. Joe Griffith officiating. The family will gather with friends and relatives im-mediately following the service in the lobby of the funeral home and at other times greet persons at the home of Alden and Patty Hoggard, Elizabeth City, NC. The family welcomes flowers but encourages memorial gifts in memory of Glenn Hoggard-Autrey to St. Jude Children’s Research Hos-pital, 501 St. Jude Place, Memphis, TN, 38105 or to one’s favorite charity.