Two local athletes closed out their indoor track season March 9 competing at the 20th annual New Balance Indoor Nationals against several of the best runners from more than 40 states and Canadian provinces. 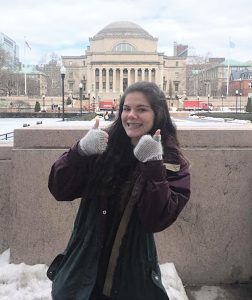 Considered one of the largest indoor track and field meets in the nation, the Indoor Nationals draw an estimated 3,500 annually to watch the competition between the best high school athletes from all across the nation.

Running well, however, does not preclude disappointments.

According to Rodman’s father, Wayne Rodman, after the female speedster was unable to get out fast enough she remained blocked in for most of the race.

It was a similar situation for Stultz. Aiming at clocking a 1.56, he also lacked a fast enough start and got stuck behind a tight pack of runners.

Considered a distance event in most years past, the 800 has increasingly become a combination event requiring the endurance of distance runner and the speed of a sprinter. While distance races can be determined on who has the best endurance, sprints are often decided by who has the best start.

Tighter corners and smaller tracks for indoor meets, coupled with an often crowded field, often make a fast start for the lead even more critical. Unlike the shorter sprints which require runners to remain in one lane the entire race, indoor events like the Nationals 800 can have up to a dozen or more runners fighting for the inside lane within the first few meters of the race.

More of a longer distance runner, it was just one month ago that Stultz won the North Carolina High School Athletic Association Indoor State Championships 1000 meter run with a new state record time of 2:32.72. His previous best 800, run outdoor, was 2:03. 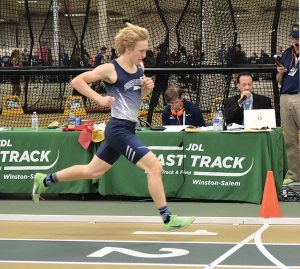 Rodman, consistently ranks among the top distance runners in the state and nation, ran in the 2017 New Balance Nationals Indoor 800 finals finishing sixth with a time of 2:15.03.

Even with hopes of better performances, the New York trip was still not a disaster.

According to Stultz’s mother, Dawn M. Stultz, although the Nighthawks senior was shooting for a better time, the race was a good learning experience.

For Rodman, who will be at Columbia University next year, it was a chance to race on the home indoor track for her college.