Dare schools win at NC Odyssey of the Mind tourney 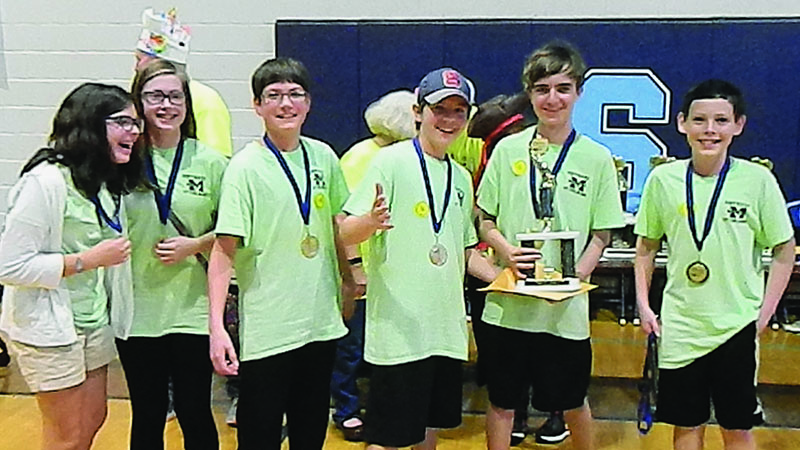 MEMBERS of a Manteo Middle School Odyssey of the Mind team (from left) Amelia Foti, Carlee Paramore, Evan Frank, Liam Ryan, Cole Walker, Davis Austin and volunteer coach Jessica Foti won first place honors at the February 24 Coastal Region Odyssey of the Mind competition at Swansboro High School. The team had to work together to solve a “Triathlon Travels” problem in which students had to create an original vehicle that could change appearance, score in “curling,” hit the correct targets when “jousting” and “run track” by navigating a course in two directions. Not pictured is Joe Roberts. (P. S. Ruckle Jr. photo)

Odyssey of the Mind is a problem-solving exercise in which students work in teams of up to seven members toward solving a pre-determined problem under adult supervision, and then present that solution in a competition atmosphere against other teams in the same division.

While volunteer coaches may help teach skills and educate team members on ways of approaching a problem, all work and solution ideas must be by the students themselves and they have eight minutes to present their problem solution.

At Swansboro there were at least 70 elementary and middle school teams and six high school teams providing solution to one of five problems.

For Problem 1: Triathlon Travels, students had to create an original vehicle that a student could ride on and drive, that could change appearance, score in “curling,” hit the correct targets when “jousting” and “run track” by navigating a course in two directions.

Problem 2: Emoji, Speak for Yourself, required student to create three-dimensional emojis to communicate the life story of a once famous, but now forgotten, emoji with special functions like growing, turning into a team member and changing into a different emoji with no spoken language allowed.

In Problem 3: Classics . . .  Mockumentary! Seriously? students recount a classic story presenting characters in a different light, a humorous account, or documentary-style performance with details added, denied, exaggerated or even disputed.

Problem 4: Animal House, required teams to design a balsa wood animal that must be fed and support as much weight as possible and have its appearance transformed and explained during an original performance.

The top two finishers in each division advance to the March 24 state tournament at Wingate University on North Camden Road in Wingate. In the event one of those teams cannot attend, the third place finisher advances to the state competition.

Winners at the state level qualify for Odyssey of the Mind World Finals May 23-26 at Iowa State University in Ames, IA.

The North Carolina Odyssey of the Mind association was chartered in 1982 and the state is divided into five geographic regions. This year more than 400 teams representing 206 school all across the state registered for the competition. For more information about Odyssey of the Mind visit https://www.odysseyofthemind.com/

Emoji, Speak for Yourself Division I, Swansboro HS Gym